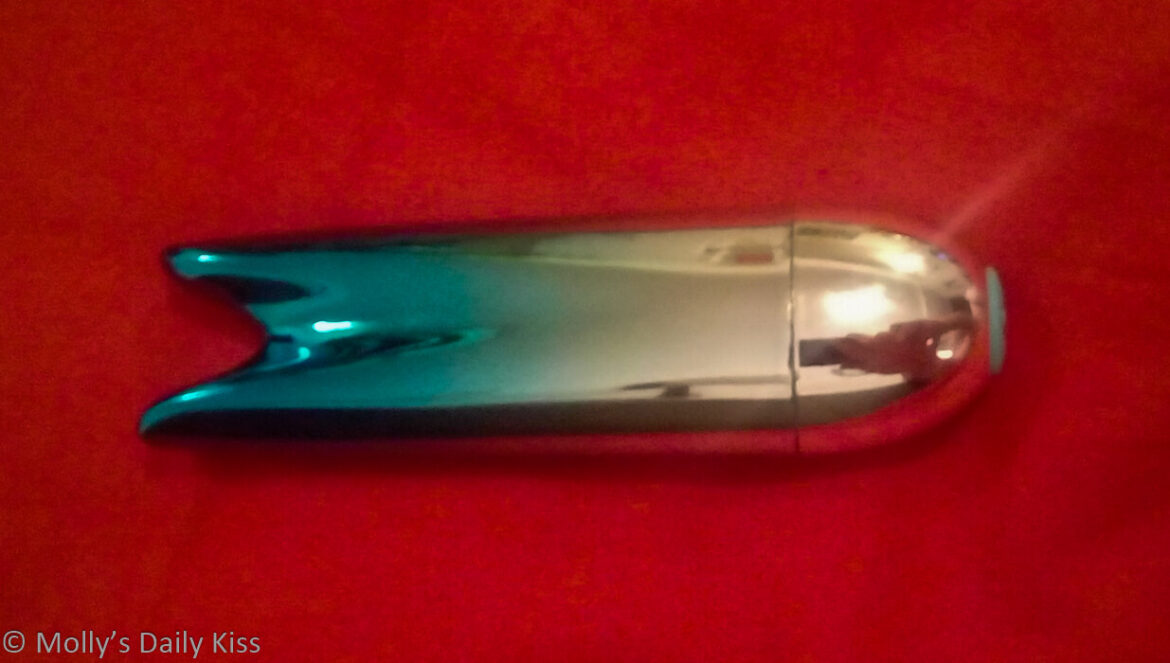 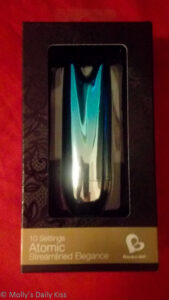 The packaging is lovely and simple with the toy itself placed centre stage within the beautifully patterned black box. Inside, the vibe is protected by easily opened clear plastic casing, and it comes ready for action with a battery inside (after you’ve removed the safety cover, which I almost didn’t do, so excited was I).

Did it hit the spot? (First attempt)

I hold my hands up, this was my fault. I’d already masturbated and come about half an hour before I decided to give this a go. This was a mistake – I was so wet that the shiny, smooth surface of the vibe slid un-gracefully over my bits, unable to get purchase. I tried to position it so the two prongs at the tip surrounded my clit, but this was both difficult and didn’t seem to do a great deal. The body of the toy was very short with the power button at the end, and yet the aforementioned slip and slide of my vulva made holding it still enough to change speeds more difficult than I’d anticipated.

I was also using it one handed to navigate my body, the other hand holding my phone as I was reading a story on it. I did not, I fully admit, have my full attention on the job in hand. And I did come – eventually – though I can’t say it was up there with my best orgasms. That wasn’t necessarily the toy’s fault though. So I resolved to try again.

Did it hit the spot? (Second attempt)

I was mightily impressed with the power of the buzz on this little toy. The problem was, with two tips rather than one, it was difficult to find a position where I could focus the buzz where I most enjoy it. It was only through a combination of the buzz occasionally hitting the mark and frantic rubbing of the toy over my flesh that I came, but again this was almost in spite of the toy, not because of it, and I have vibrators and other toys that are far more pleasurable to use – this one felt like a chore, like work to get the orgasm out of my body. That’s not really the point of masturbating.

This is not the toy for me – honestly, I don’t have a good history with plastic-bodied toys, and prefer  something silicone, or textured which provides necessary friction. The finish of this toy was at odds with what my body needs.
However, I have plans for it. As I said, for such a small toy, the buzz is powerful – not Doxy levels of power, sure, but I can envisage slipping this little pocket rocket in my overnight bag and using it on a partner. I have particularly vivid fantasies of running it over the erection of a captive slut, enjoying the exquisite ecstasy on his face as I torture him.

I’ll keep you posted on that one.

This toy was sent to me for free by Rock’s Off in exchange for a fair and honest review.

It needs three prongs so the middle, shorter, one could sit on your clit. Then perhaps it would be real fun.