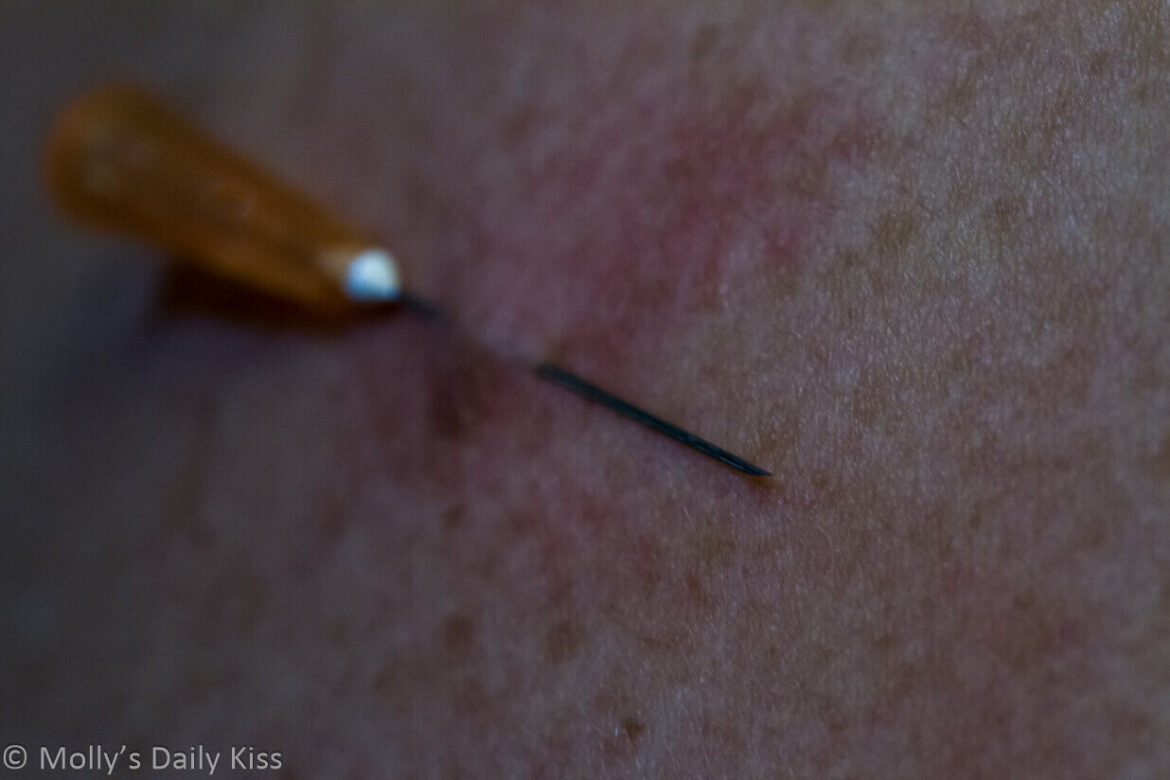 I found the little suitcase in a charity shop in town. It was stuffed at the back of the shop alongside some fairly tatty old handbags and a briefcase that the initials WK embossed in gold on the front. The little suitcase was an off white leather with a handle and silver fastening that held the lid in place. When I click it open and looked inside at first it appeared completely empty but in the little fabric pocket sown into the side their tiny silver key which I realised worked in the equally tiny little lock on silver fastening on the front. At the time I was too worried about being able to lock it but that was before I moved back in with my mother.

When I got it home I was delighted to find that is fit absolutely perfectly underneath my bed, it was almost as if it had been designed with that exact purpose in mind. Clearly it had been designed with other uses in mind. It looked like maybe something a little girl had kept her dance shoes in or possibly dolly clothes. There was an innocence to it that made me smile and somehow make what I intended to put it all the more bad.

And most people would think it was bad, or certainly weird. After all why would anyone have a small little suitcase underneath their bed that contained a packet of medical gloves, antiseptic wipes, tissues a couple of different vibrators and fairly large packet of needles? I mean I have not looked under many people’s beds that is for sure but I feel I can say with a fair amount of confidence that is not a run of the mill occurrence when it comes to things kept there.

I had discovered my needle love whilst at university. Well not at the actual university obviously, but leaving home and allowed me to experience a freedom never before afforded to me and so when some of the other girls said they were going to try out a local munch I agreed to go with them. I didn’t confess my ignorance as to what that was to them mind you but as the saying goes Google is your friend. It is a good job I did my research though otherwise I think I would have made a total prat of myself turning up with no idea what I was actually going to.

Watching the way she prepared him for what she was about to do was possibly the sexiest thing I had ever seen. The care and attention she paid him, the way she prepared his skin, talked to him in these soothing tones, how he smiled up at her as she pinched the flesh on his chest and slide the first needle deftly through his flesh nearly, much to my surprise and also embarrassed horror, made me come on the spot. I fled from the room, hot and panicked and went and hid in the toilets while I tried to process what had happened. Eventually I emerged from my hidey-hole and the first person I met when I did was the lady who had been doing the demo. It appeared she had noticed my sudden departure and was concerned for me. I tried to reassure her that I was OK but she insisted on taking me to the refreshment area and getting me tea.

It was over tea and cake that I found myself blurting out questions about the needles. Where did she get them from, how did she learn that, why would someone like it? She seemed pleased with my questions and answered them all and then finally asked if I wanted to have a go?

“Putting them in someone else or having them put in me?” I almost whispered in reply

“Either. Or both” She replied

I meet with the needle lady on fairly regular basis after that. I shouldn’t call her that. Her name is Amelia and in time we became firm friends, best friends even. I wish I still lived close enough to pop round for tea like I used to.

The first time I did the needles on myself she sat quietly in the corner of the room and watched me. Up to that point she had always done them for me and sometimes I had done them on her but it had soon become apparent that my desires were definitely more about receiving than giving. Once she knew I was OK she silently left the room and went downstairs. With the needles lined up on my thighs I laid back on her bed, spread my legs and rubbed myself to an quick but powerful orgasm.

That was almost 5 years ago. I bought the little suitcase 4 years ago and have been keeping my needle collection in it ever since. Just over a year ago I ended up moving back in with my Mother in order to try and save some money. My Mum is sweet but too damn nosy for her own good and definitely not the kinky type and so now the little suitcase always remains locked and the tiny little key lives in my purse. She once asked me about the case and I told her it was just bit and pieces I had collected, mementos of things, she seemed happy with my response and left it there. I am fairly sure telling her that is contained needles which made my heart race and my cunt throb as I slide them through the flesh on my breasts, arms and legs was not the answer she was looking for. It was however the truth.

And just because I am super proud of it I want to point out that this image, like 99% of those on my site was taken by me of me. Needle work by @domsigns obviously

The Gospel According to Alice

I just love this, although you probably already guessed that.

It makes me want to go back and re-live my life again and make sure I do things differently, not waiting so long before I make those sorts of discoveries and be a bit braver.

I have never been involved in needle play – and I think it’s because i am not that brave. My brother in law does play in this area, and has done for many years. I have spoken to him about it and can see the attraction – reading your and Bees insight into it has made be reveiw it it my mind, but still i feel a little frightened by such a propect. Happy for u that it creates such a powerful response though x

I have never been involved in needle play – and I think it’s because i am not that brave. My brother in law does play in this area, and has done for many years. I have spoken to him about it and can see the attraction – reading your and Bees insight into it has made be review it it my mind, but still i feel a little frightened by such a prospect. Happy for u that it creates such a powerful response though x

I love the story of beginnings and this was so fantastic it took me a minute to question whether it was you until the end.

This is absolutely divine writing. I started reading and couldn’t stop until the end, thinking I am reading a true story and only afterwards discovered it’s fiction. Brilliant, Molly!