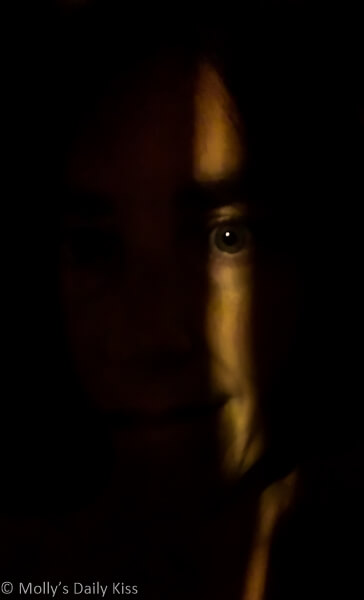 I hadn’t been out long, 20 minutes or maybe half an hour but it was dark by the time I got home. I plonked the few bits I had gone to the shop for on the side in the kitchen and listened. It seemed rather quiet, too quiet really and when I went round to the front room the sofa was empty. When I had gone out they had been sitting together on the sofa. That is where I had left them and it hadn’t entered my head they wouldn’t still be there when I got home.

I sat down on the sofa and pulled off my boots and socks letting my feet rest on the soft red rug that covered the centre of the room. That is when I heard it, or should I say heard her, it was a cross between a groan and yelp and was accompanied by the unmistakable sound of a hand striking flesh. I lay back on the sofa and looked up at the ceiling as if maybe I might be able to see through it. The spanking sound came again and again, like a short round of applause filling the silence of the house. I smiled at the sound and my body’s instant response to it, dampness between my thighs.

I didn’t bother gathering up my discarded boots or socks but left them exactly where I had dropped them. In the kitchen I shoved the few perishables from my shopping trip in the fridge and left the rest sitting in the bags on the side, then flicking off the lights I made way to the bottom of the staircase.

I waited at the bottom of the stairs for a moment, listening. Had they heard me in the kitchen and stopped? Then she made a noise again, a low throaty moan and I knew if they had heard me they were ignoring my return home and carrying on. I tiptoed up the staircase and across the landing. The door to our bedroom was closed. I bent down to look through the keyhole but the angle was wrong and all I could see was my wardrobe and some of my clothes scattered on the floor where I had left them earlier in the day.

The sound of her voice made me jump

Argghhh please what? I thought, please touch me, please fuck me, please spank me more or less or…. my imagination flitted through all these possibilities, jumping from one to another like a little series of pornographic gifs playing in my brain. Every single one of them turned me on and as I pressed my ear tighter against the door one of my hands disappeared down pass the waist band of my leggings and my fingertips sort out the hard nub of my clitoris within the puffy folds of my cunt.

She moaned again, but this time it was not accompanied by the sound of spanking, instead I could hear the rustling of sheets and the slight creak of our bed frame shifting under their weight. Our bed, I thought, they are fucking in our bed and I am out here in the dark on the landing listening to them. I should be outraged, insulted, sad, but I was none of those things. Instead I was excited, thrilled even, and my body was responding to the touch of my fingers and the sound of them together and the thoughts in my brain.

I pressed me forehead against the door, pushing against it slightly as my fingers rubbed frantically inside my leggings and my ears strained to hear them. The door can’t have been properly latched because all of a sudden there was a soft click noise and I felt it give way. I watched as it gently swung open just enough for a shaft of light to come slicing through the gap between the door and the frame sending a beam of light across the landing.

I waited to see if they had noticed. Had the noise of the door been enough to alert them to my presence? For a brief moment I thought it had as there was a definite silence on the other side of the door but then it was broken with another groan, but it wasn’t her this time, it was him.

Instantly my fingers sprang back into action and I closed my eyes and let all the dirty possible things they might be doing together play through my mind but then I realised, the light, the gap, maybe I could see now and so I inched my way over to where the door met the wall and pressed my eye up against the gap.

He was fucking her, she was pinned down on the bed beneath him, his hand holding her wrists above her head, her legs spread wide and her head thrown back as he pushed himself into the soft flesh of her cunt again and again. In our bed, without me.

I could feel my orgasm building inside me but how could I ask, he didn’t even know I was here and asking would break the moment, it would reveal me to them as the dirty little voyeur I was. The unfairness of the situation had me biting my lips so hard I nearly drew blood but I couldn’t stop watching and listening to the debauched scene playing out in front of me.

“I am going to come in your cunt” he growled at her and I pressed my eye right up against the gap to see his body twitch and the muscles in his thighs and arse tighten as he emptied his balls into her.

God I wanted to come so fucking badly, my fingers were soaked with my juices and my pussy throbbed with the need for release. As he pulled himself from her body I assumed he would flop down on the bed beside her but before I could react he had crossed the space between the bed and door and pulled the door open. The light from the room streamed out onto the landing and illuminated me like an escaped convict caught in the searchlights.

“What are you doing?” he said

“Umm, I was, umm, at the shops” I stuttered in reply

“No you weren’t, I know exactly what you have been doing,” and he laughed as he grabbed my wrist and pulled me into the room and started stripping my clothes off me.

“Oh yes, I know exactly what my dirty little voyeur has been up to” he said as his fingers slipped into the sticky wetness between my thighs, “but now it is your turn to be watched”.

I feel like I’m processing this on multiple levels ~ getting inside your voyeur’s head and understanding/sympathizing with her responses while at the same time recognizing that this kind of scenario goes beyond a hard limit for me (it would, in fact, be grounds for divorce; we don’t play at home and it’s not “our” bed, it’s MINE), and yet…

Very well executed scene, Molly. It got under my skin, in more ways than one. Great writing!

I am sorry if it struck a nerve in the sense of your hard limits. For us sharing our bed with another is something we have done before and as Michael has a new girlfriend will probably be something we do again fairly soon. I am OK with it, in fact it turns me on but even for us their are limits. This kind of scene in reality would only work for me if I knew it was a set up so to speak.

I can’t imagine being the voyeur but would love to be the one being watched, especially if I knew I was helping to cause that kind of reaction. And I agree with you – this is hot as a fantasy, but in reality, I would need to know about it ahead of time. I’m open to a lot of things, but NOT surprises. Especially since I have little interest in watching.

See, I think the surprise could work for me but not if I thought he wasn’t expecting me to find them

Oh my. This hit all the right buttons for me on all levels. Watching and being watched. Oh my

This had me squirming in my seat, Molly. That’s what Iget for sneaking peeks at your blog while I am at work!

Loved his reaction, although I am sure I would have been in for a good hard spanking if my M had caught me.

This pushes a lot of my buttons. I definitely have fantasies of watching, but more along the cuckqueaning lines of being made to watch, rather than being a voyeur.

And reading the other comments… We’re still in the early stages of opening up our relationship, so haven’t worked out the rules regarding who’s bed it is yet – well, other than it being mine, obviously 😉 – but we both have fantasies about watching, so as long as we have a framework of consent, I’m sure it won’t be an issue.

Fuck, this is so hot – the idea of watching a partner with someone else (if consent were given beforehand) is sexy, but the idea of being caught and punished for doing it is even better! Your writing is really engrossing – I read through it speedily and wanted more at the end!

Thanks Molly. Very clever writing. Took me back to half a lifetime ago when I was involved in a similar scenario with my then neighbour and his partner. As I was the one on the bed at the start (reassured by his encouragement that she would be cool with it) I’m not sure how she felt when she arrived home with the shopping, but somehow she and I ended on the bed together while he watched…
Indie xx

I didn’t see this when you first posted it so I wasn’t sure until the end when I saw the date of the comments whether it was fiction or you telling a story from last week. Either way, very hot! Xx

Damn this was so hot! It’s like you took one of my favourite fantasies and made it better Lol! The ending was perfect. And I love your photo too!
Aurora x