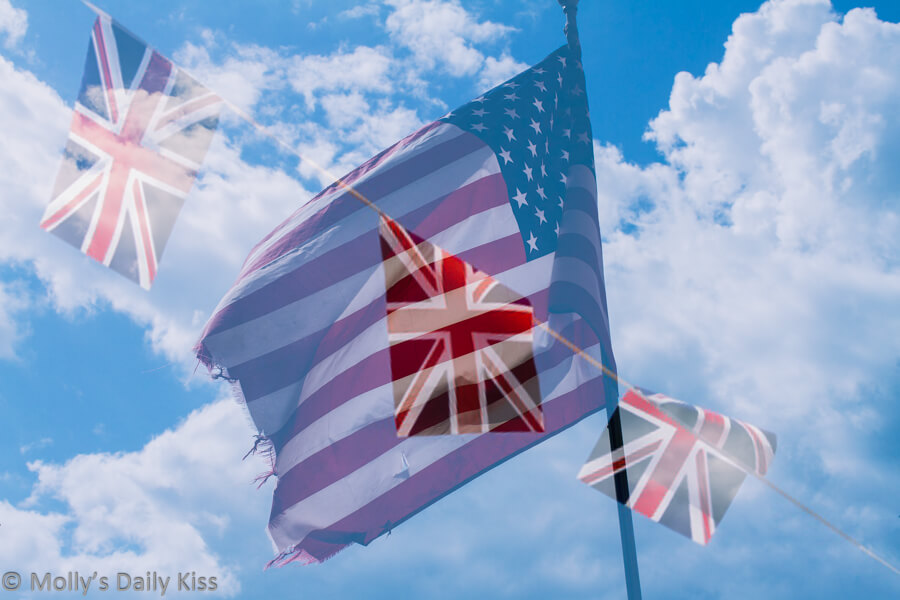 “It’s my shout for the first round”

“Umm, OK, where are we going?” I reply, confused by his opening statement as we are currently sitting at home working with no plans to go out

“Come round and I will shout you some dinner”

“Will you shout me a tenner?”

Which basically means it is my turn to buy something, often used when referring to buying drinks or dinner.

And a round is a round of drinks which he tells me is a term used in the USA but in the context of the original sentence meant nothing to him.

This is a not an uncommon conversation in our house and one that has not only lead to many misunderstandings but lots of laughter too and is the result of being married to a foreigner. Now as we both come from English-speaking countries you would have thought the language divide would be minimal and in many ways it is, but in a surprising amount of ways it isn’t.

We have been married just over 6 years, and together a total of nearly 8 years, and even after all that time we still have conversations like this one we had just a few days ago. They were more frequent at the beginning of our relationship and certainly blossomed into a weekly occurrence when he first moved here but even now they probably still happen at least a couple of times a month. Either I will say something or he will read something (which was what happened above) and be utterly bemused by a word or phrase.

These conversations are nearly always hilarious as I try my best to explain the odd English terms and he rolls his eyes and wonders what on earth is wrong with us Brits. (Note from Michael: what I actually say is, “What the hell is wrong with you people?”)

At times the conversation goes the other way but it is definitely not as common. I think it is because American culture and language is something that we Brits are more exposed to through TV and films. Not that is doesn’t happen because seriously what on earth is a comforter? To me that sounds like something you give a baby or young child to help comfort it, imagine my surprise when I learn that it is in fact a very strange version of a duvet or the first time he said to me “get your fanny in gear” I am fairly sure my eyes widened in slight alarm because in the UK your fanny is your cunt not your arse. Then it is my turn to mutter “what is wrong with you people?”

It is not just the unknown words either, but ones I have found myself growing fond of or just finding myself using in a way I never would have before. Take panties, not a word I ever would have used before, in the UK they are knickers and that is that but I got used to him calling them panties and I find myself often using it too. The same can be said for dick, a word that I would have used previously in the context of a dick head or someone being a dick but rarely to refer to penis but it is word he uses a lot when it comes to his penis and so I have found myself mirroring that. I do like sucking his dick.

Together we have learned a lot about language and culture. Invariably one of these discussions will end up with one or other use doing research into the origins of the word or saying. For example did you know that light switches in the US are up for on and down for off and in the UK it is the exact opposite, or that if you told most American’s you were stepping outside for a fag they would assume you were heading out for an homo-erotic encounter. If you go into a shop in the UK and ask them where the pants section is they are going to show you to the underwear (mostly likely the men’s undies too) and most Americans have no idea what a fortnight is either. Public schools are private schools in the UK while public schools are state school in the USA. Dungarees are overalls in the USA and what we call overalls in the UK the USA calls coveralls. A vest in the UK is something sleeveless that you wear under your shirt/t-shirt and in the USA a vest is what we in the UK call a waistcoat. Suspenders in the UK are the things that hold up your stockings which Americans call garter belts and what we in the UK call braces, which hold up your trousers, Americans call suspenders. It is all so confusing

These are just a teeny tiny sample of the cultural and language oddities we have discovered between our two countries and even though we encounter them less and less as the years go by we still remain two foreigners, divided by a common language (and the awful things he does to tea.)

I busted out laughing in the last line. You both make me chuckle

Loved this – my man is Scottish and I have similar problems which seems bizarre considering it’s only a few miles that separate the two countries and they are both parts of the UK!

I can empathize with your Michael. Marrying a Canadian was enough “culture shock” for me. I will never forget being told that our green monotone for money was just ugly, at the same time as I was trying to figure out “loonies” and the like for the Canadian monetary system…

HAHAHAHA! I loved this! I knew most of these language differences but I legitimately just said, “Oh! That’s what a waistcoat is!” I’ve heard/read the word but had no reference for what it was. ??

Mum was an Aussie war bride at 17, at the end of the war. She married a Yank sailor from Toledo, Ohio. I didn’t come along until a much later second marriage. After WWII, it seemed very important to everyone to fit in and be Americans, so she lost her accent and her Aussie language.
Many years later my brother and I went to Sydney for our cousins wedding. He and his mate (friend) didn’t do well with communication. I’ve always had an ear for accents, so I had to translate !
Not just the different words and phrases, but the whole conversation!
So that’s why I say I speak American as well as Australian English

As a fellow Brit, I’m surprised that panties is an Americanism. Maybe that’s something I have picked up from films and TV, or even blogs. But pants are definitely something only superheroes wear over their pantyhose … which in itself is a word that just makes my toes curl … even more than tights do. When it comes to suspenders, I really struggle. Jeez guys, get with the frikken program! (I believe that would constitute suitable terminology for our colonial bertherin.)
Obviously your completely right about a fanny being a cunt, and it took me a long time to figure out what the hell a fanny pack was.
As for dick … I think that was probably the first word I used for a … well, for a dick, at least once I was old enough to not call it a willy.
Incidentally, coveralls is not an uncommon term in the UK. Though don’t even get me started on the subject of tea!

Very true although I don’t think dick for penis is an Amercanism as it has a long history in English literature. A lot of the time american usage originated in the UK but has fallen out of fashion here. And let’s face it we have problems in the UK just understanding each others regional accents and usages and that’s before I even consider the variations in language due to class,

Love this post! I hope I’m not going to be too cheeky by using it as a springboard for my own writing this week…

Not at all. I look forward to reading it

All I can think about now is Leo Pard

Oh my god – I LOVE this. We have so many hilarious conversations about language, too; mostly I like to use the new words I learn while sexting (AKA “I’d love for you to bend me over the bonnet of your car…”). Reading so many UK-based sex blogs has done wonderful things for my sex life. ^^

Oh gosh, this made me laugh. It sounds like Master T and me, because just like British English and American English are so similar, yet different, we have the same with Afrikaans and Dutch. There are so many words that are the same but mean something totally different… vest being one of them. I know a vest as the same thing you know it in England, where over here it is a cardigan. The word for a skirt over here is the same as the word for a dress in Afrikaans. And not to speak about a word that means ‘hitting someone’ in South Africa and over here it means ‘fuck someone’. Imagine the confusion!