Something from the weekend 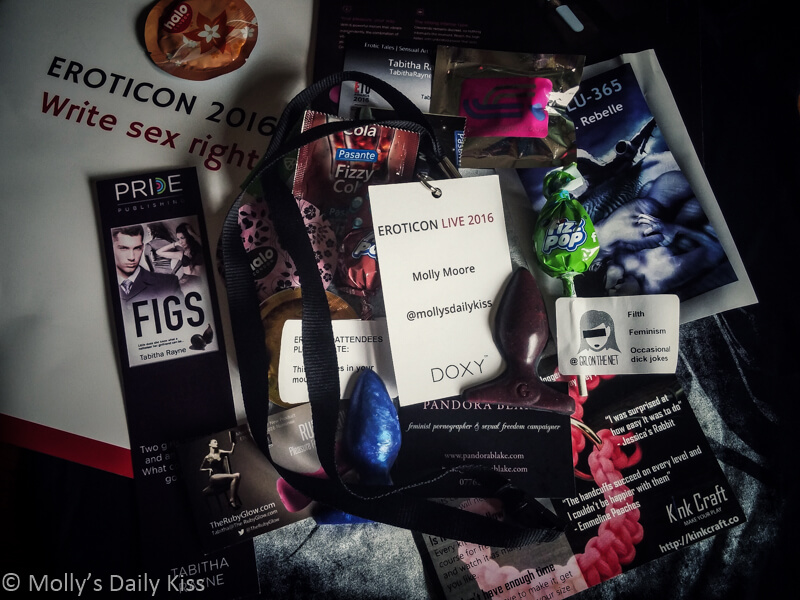 I intended to write this post yesterday (Tuesday) but mainly what I did was sit and stare at my computer through a haze of exhaustion and teary sadness alongside some slightly stressful full on parenting: Clearly not a combination that is ever going to result in words on a page, particularly if you want those words to make sense.

Today things are better. I went to bed last night at 10.30pm, which is almost unheard of for me and slept right through until nearly 9am and despite waking up to my period in full flow I actually feel like a functioning human being. Are you confused? Those of you who spent the weekend doing the same thing as me will definitely know what I am talking about but for the rest of you who did not. This last weekend I spent with my darling husband and a crap ton of other truly talented bloggers and writers in Bristol at EroticonLive.

We arrived in Thursday afternoon, having collected a very tired and jetlagged Hyacinth from Heathrow and despite the fact that the conference did not start until the Saturday morning the hanging out with friends did and so by the time we got home Monday night I was literally dead on my feet. This is not a complaint mind you because I spent the weekend having amazing conversations with people, sharing ideas, knowledge skills and sometimes just simple encouragement and love. I got to take pictures of a whole group of sexy woman with their boobs out, I managed a joint Scavenger hunt with Rebel, I spent time with fabulous friends who I have met before (I am not going to name you all but you know who you are) and got to meet some new ones and I also laughed so much that I nearly peed my pants. Oh and I also got married. I am now officially Hyacinth Jones Sister Wife No.1. Go me!

I have written before about being an introvert and sometimes finding myself running out of steam when it comes to spending a lot of time with people but oddly this weekend I didn’t have a single moment when I needed to take myself off to the quiet space to let my brain settle for the next interaction. I think that is the first Eroticon where that has not happened. I can’t quite work out why that is but I think it is has something to do with that fact that there were so many people who I know really well there that spending time with them was easy. Remember this is not a reflection on them but on my introversion and how my brain copes in situations like this. However I am also fairly sure that it is why I crashed so fucking hard and deep yesterday. I really did feel like I was ill. I was cold all day, tired in ways that words cannot do justice too, overly emotional, jumping from sadness to anger about stupid little things at the flick of a switch. I spent quite a lot of the day playing back the weekend in my mind and rather than being a happy audience of my memories I raged at the fact that ‘they were all spoiled’ because I looked at them through a filter of loss and longing.

Sleep is a wonderful thing for an introvert like me; the only other thing that works in a similar was for me is sex or a damn good beating. It allows my brain to find a space where it can reset itself. Sleep does it for obvious reasons but both sex and being beaten does it by forcing me to centre my brain on my physical self. It leaves no space for anything else and creates a tunnel vision in my mind that makes me focus on the here and now, on the moment I am in. It demands my fucking attention. It is the best reset button ever because not only does it calm my mind but it also gives me a physical release for my emotions. Sometimes I will end up laughing hysterically and sometimes there are tears, both of which are deeply cathartic and calming my brain that has a tendency to knot itself up into an over thinking, over stimulated mess. Last night the reset button was definitely found in sleep but to be honest that is unusual for us, because usually when I am like this he will reach for me however I think (not that I have asked him) that he knew my tiredness need was so overwhelming that anything else but sleep was probably not the answer. Instead he sent off for a bath and a wank which was the perfect pre-sleep activity because by the time I got into bed I was not only a bit more relaxed but I was toasty warm and sleep was easy to come by.

Today the lens has changed. I would be lying if I said I didn’t wish we were still all in Bristol but I am no longer angry and sad about it. Now when I think about sitting in the bar at the Raddison Blu at 1am laughing so hard I could hardly breathe it brings a stupid happy grin to my face. Remembering all the sessions I attended makes me want to get started on some of the ideas they have inspired in me and most off all I am looking forward to doing it all again because there is most definitely a future to this event and it is a future that I am very excited about!

The Geography of a Lover

The Kink and I

I so wish I was there with everyone this weekend!! I’m glad you had such a good time and completely understand crashing 🙂

Happy you recovered and recharged… and ready to do it all over again! Thanks for the report on a fabulous weekend. Fun to see the calling cards and looking forward to hearing more stories. And, interested to see what you come up with next.

Echo: introversion. I was *nodnodnod*ing along with your descriptions, especially the out-of-nowhere flashes of anger and sadness. I get mood swing-y in the aftermath of prolonged interactions with groups, and it seems the more stressful they are (on mind, body, or spirit – not necessarily negatively, just excess effort and expectation), the more frayed my temper becomes on the comedown (my husband calls me Vicious McLicious when I’m like this) and the harder I crash afterward.

I had thought this year’s Eroticon was to be the last in the forseeable future, but your closing statement indicates the event will be continuing…? I’m curious to hear more about that!

Eroticon, in its current format as organised by Ruby Kiddell has come to an end but the event will continue on. More news on that soon once details are thrashed out

I crashed hard, very hard too. I slept well on Monday when we returned home, but yesterday was hard, so much so that I still cannot write about the conference. I forced myself to write about the branding, but I have so much I still want to say. Today I feel better and some words about the weekend is starting to form. I’ve never dropped as hard after the conference than I dropped after this one…

I can hardly wait until next year!

Yeah, I had to call in sick today because I could barely speak or stand. Feeling better now, but still, the drop is real and, much like Rachel’s, involved some form of cheese for me.

However, it was a wonderful weekend.

Can absolutely relate with everyone’s “drop” experiences, except I then met my pilot and saying goodbye to him has been brutal. I was already on the verge of tears all day Monday as it was for having to say goodbye to everyone on Sunday and again that day! Adding yet another goodbye has done me in!

Biggest of hugs to you! xx Hy