Kink Of The WeekOralWicked Wednesday 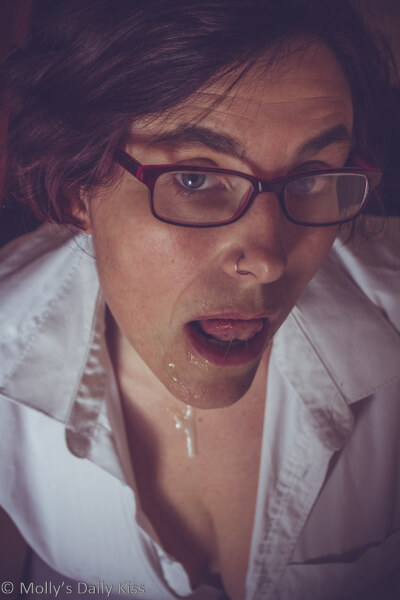 Yesterday @domsigns wrote a piece on This D/s Life about his love of women in glasses. While most of it I already knew the story about the Playboy image and the ‘librarian’ look, was new to me. It got my dirty little mind working and last night before bed I asked if tomorrow he would play along with an idea I had which would not only hopefully tap into that little fantasy but, maybe, get some images to use for my post.

Before I continue with that story a few thoughts on glasses from me. I have worn glasses since my early 20’s but not all the time. I wear them for driving, watching TV, going to movies etc but that is it. I don’t need them for close up stuff like reading, in fact, they tend to give me a headache if I try to wear them when I am doing stuff like that. I can’t say I have ever been fond of my glasses, they are just something I need from time to time and are mainly annoying because I put them down and can’t find them or else I break them and they cost me a fortune to replace. However being with a man who, when I put them on, makes appreciative (growly) noises has inspired a new-found fondness for them in me. To the extent that recently I splashed out on two new pairs, one of them having more solid frames that I mainly selected because when I tried them on in the shop he made it abundantly clear that those were his favourites. Of course now I know why, because they fit that classic librarian look perfectly. Maybe it is the fact he loves them which means I have become rather fond of them too, I don’t really know the answer to that but I do know that I wear them a great deal more often than I ever have any other pair of glasses I have owned.

So back to today…

It is school holidays here at the moment which means the opportunity for naughtiness during the day is somewhat reduced. Luckily my son had to attend a revision class at school this afternoon in preparation for exams but that still left an annoying tween girl flopping around the house moaning that all her friend where busy. Eventually after much persuading from us she donned her roller skates and set off for a little spin round the neighbourhood. As the door slammed behind her I hot footed it upstairs with my glasses, camera bag and rifled through my wardrobe looking for a little white blouse to wear. Moments later he responded to my calls and appeared in the bedroom. I am pretty sure the sight of me in crisp white shirt, glasses and not much else was a welcome one but when I sunk to my knees in front of him, unbuttoned his jeans and took his cock in my mouth I could very quickly tell that my idea had been a good one and it was not long before he was decorating me with a very visual sign of his pleasure. I think it is safe to say he was not making it up when he said the slutty librarian thing totally does it for him.

Ps…On completing this post I asked him to proof read it for me. He asked me to do the same for him for his post  on This D/s Life, oddly, we seem to have written very similar pieces without being aware that the other one was writing it. His version is called Double Take

Oh my God! It is doing it for me right now!!! Perfect glasses too.

Reading your post and then reading @domsign’s posts is incredibly satisfying and makes me go all melty. Two people working to be what the other needs and wants. Thank you both for sharing.

I’ll be honest, that pic does it for me too

You do look super hot in those glasses! x

As much as I enjoyed this, it clearly wasn’t proof read as you state. Lots of sloppy errors. Perhaps Michael was too distracted while reading it.

Yep, because my blow jobs are just that good!

Double the fun… and such a sexy image! Love that both of you have written similar posts 🙂

Yes, there is something wonderfully hot about the debauched librarian look, and you wear it so well Molly 🙂 x

I’m often told of the nerdy girl in glasses being hot but I hadn’t even considered that librarians could be in the same group! I guess it’s just not something I associate with and I’m fairly sure nothing will make me like glasses.