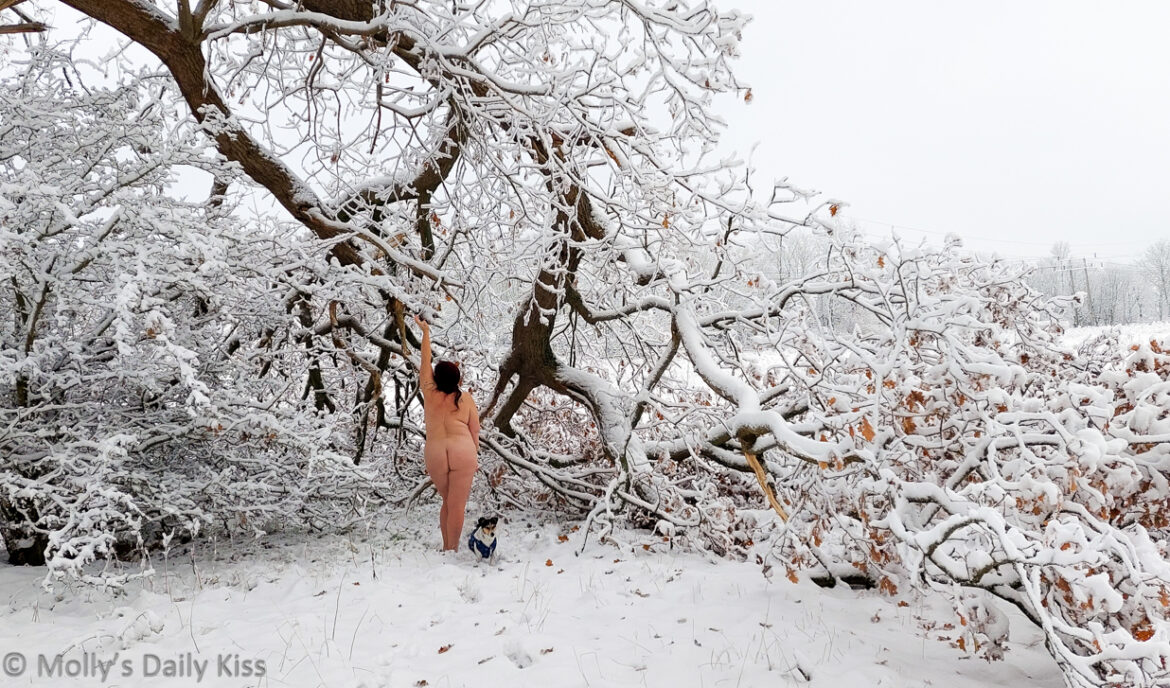 I took this image back in the middle of December when we had proper, beautiful, thick, snow Usually in this country, even if it snows, it stays for a day or so. Rarely longer and very rarely for the best part of a week. But this time it did exactly that. It was bitterly cold both day and night. Not ever getting about 0 degrees in the middle on the day even when there was some sunshine.

I took this image the day after the snow fell. I thought it would be my only chance because my experience told me the snow would be gone in a day or so. Michael tried to talk me out of it. “It’s too cold, you are going to freeze” he grumbled but I refused to be dissuaded.

I am completely naked in this image. When I slipped off my socks standing on the snow was almost unbearable and so what you can’t see is that i sacrificed my t-shirt so I had something to stand on. Even with that my the time I struggled back into my socks and walking boots my feet were so cold that they burned.

For a moment as I stood there shivering trying to get dressed again I nearly agreed that Michael had been right and I shouldn’t have done it but then as we set off for home I found myself laughing out loud and whooping really loudly in celebration. The buzz of it, the risk, the cold, the element of endurance. I was a little high on it all and despite still being frozen I bounced along happily all the way.

It was only when we finally got in that I realised how cold I was and straight off into the shower to warm up. My skin stung under the hot water and burned a hot pink as the warmth returned to my body.

Later, once I had eaten my lunch and drink an indulgent hot chocolate that Michael made me I looked at the pictures I took and I knew that even thought it might have been a bit mental to strip off in that cold, especially that far from home, I had absolutely no regrets because this image, well I am damn proud of this one!

Oh and bonus, this one also fits in the A Girl and her Dog Category. Sensibly Hudson kept his coat on though.

Ha!
Wish you could come over for dinner.
We are each dressed appropriately.

Suffering for your art!
I salute you Molly. A wonderful image.

Lovely photo Molly. Thanks for sharing. I have done something similar, and yes it was feezing, bu5 the freshness, the risk and the adrenaline is well worth it.

Yes exactly that! I would totally do it again to get a great picture

I love this so much! What a fabulous adventure!

Such a beautiful picture and I hadn’t even noticed Hudson there. Glad you didn’t suffer frostbite, I remember how cold it was that week! The things you do for art…

Looking back at the image I too notice your companion. He/she looks very special.

What a great image! And yes I know the “suffering for my art, but that’s okay,” feeling. 🙂 We had similar temps here the week we went campervanning and I decided to get out on the basketball court. Yes it is wildly exhilarating!

Great shot and I can empathize with the snow and cold. We get here for a bit longer. We should a e warmth again maybe in April.

Oh my goodness! That seems such a fabulous thing to do in theory! Brilliant results, but wow. Cold!!!

This Article was mentioned on mollysdailykiss.com