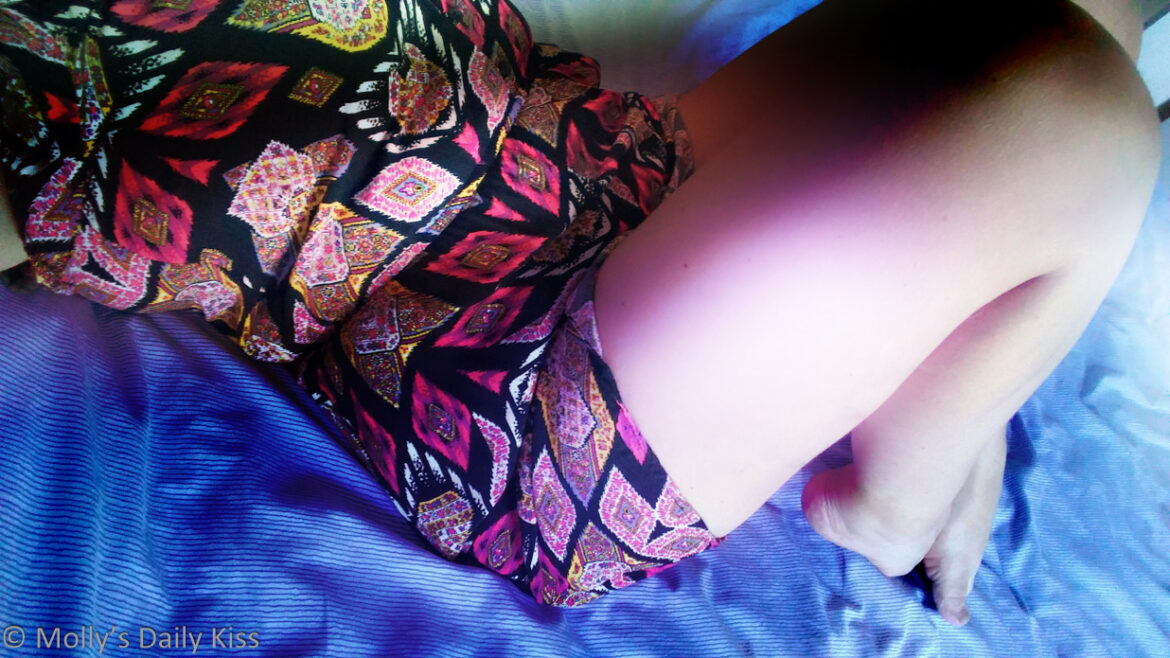 I so nearly didn’t go.

He had asked me out for a drink the evening before but I had not been able to make it.

“Tomorrow then?” He messaged back

I agreed but explained I would have about an hour free as taxi Mum was required that evening.

We had been chatting back on forth on OK Cupid. He had been very complimentary about my blog and not like some of the messages I had which had basically been a version of ‘nice tits, but he talked about my writing and how much he enjoyed it. However he was not a big one for messaging and so far I had not felt a great deal of chemistry. Although his pictures showed a handsome man so there was that!

It was hot. August was in full glow and I picked out a little summer dress (pictured above) and some lovely underwear. He wouldn’t know, but I would and nice underwear makes me feel sexy.

Between getting ready and going work demanded my attention and the afternoon vanished in what felt like moments and I was stressed, angry. Things had annoyed me. I wanted time on my own not a date, or so I thought, but the moment I thought about sitting in the garden instead demands at home appeared and suddenly getting out the house seemed like the right idea again.

And why not let a handsome man buy me a drink, I thought to myself as I jumped into the car.

He was already there when I got there. He had actually messaged to say he was early but not to rush. I would soon learn that being early was often his way. He did that thing, as I approached the table, rising from his seat and stepping out from behind the table. Eventually he would pick up the nickname The Gentleman, I guess this move was the first glimmer of why. In a previous life, a pre-covid life, we would have hugged but now we just kinda paused and looked at each other and then he waved towards the spare seat and the awkward moment was gone.

The next hour just vanished. He was so easy to talk to. He was completely engaged with me, with our conversation. Concentrating on what I was saying, asking questions and answering mine. In a very short time we covered an really remarkable lot of ground. It was fun, interesting, and the chemistry? It was instant, electric. I could literally feel it weaving it’s way round us. I had absolutely no desire to leave and go home.

I so very nearly didn’t. Again in a pre-covid world taxi’s where an option but not any more. She needed me to drive her and there was no getting out of it and so I reluctantly made my excuses and we got ready to leave.

Walking back across the car park together to our respective cars. He was talking and I glanced across and watched his mouth as he spoke. All I could think of was, I wonder what it would be like to kiss him. The urge was almost overwhelming and I bite my lip and looked away to stop myself from saying it out loud.

How was it remotely possible that after just this brief first date my body ached with lust for this man? The answer is that just sometimes you meet someone and the chemistry is instant and intense. In my experience it doesn’t happen often but when it does it is a powerful thing.

But did I mention this was a Covid world now and I had spent the last 6 months hiding in my house absolutely terrified to expose my immune compromised body to this virus? In theory even this date was a risk but I decided that I couldn’t spend my whole life shut away and so calculated risks were the way forward. However in a pre-covid world would have kissed him in that car park on that warm summers evening and probably pressed my body into his as I did but in the scheme of things I hardly knew him and he had been very honest and told me he had been to various business meetings the last day or so. He felt like a risk I wasn’t ready to take… yet.

When I got home the first thing I did was message him and tell him I had a really lovely time and would he like to maybe get dinner the following week.

The second thing I did was message to a friend

“I had a really lovely time”

“Ahhhh so glad you went then?”

“Yeah, so very glad I went” I replied

Lovely both the sharing and the pic.
There is something about a woman’s leg that always hits me in a visceral way. Especially when partially glimpsed. Revealed only a bit. Just a peak. Like a preview to wet the appetite. Thanks.

There’s something about that first meet, that new chemistry, isn’t there? It’ shard to ever replicate again (but I guess logically it’s that whole biology and continuation of species etc, but romantically it’s something else).