Should I get my nipple pierced? 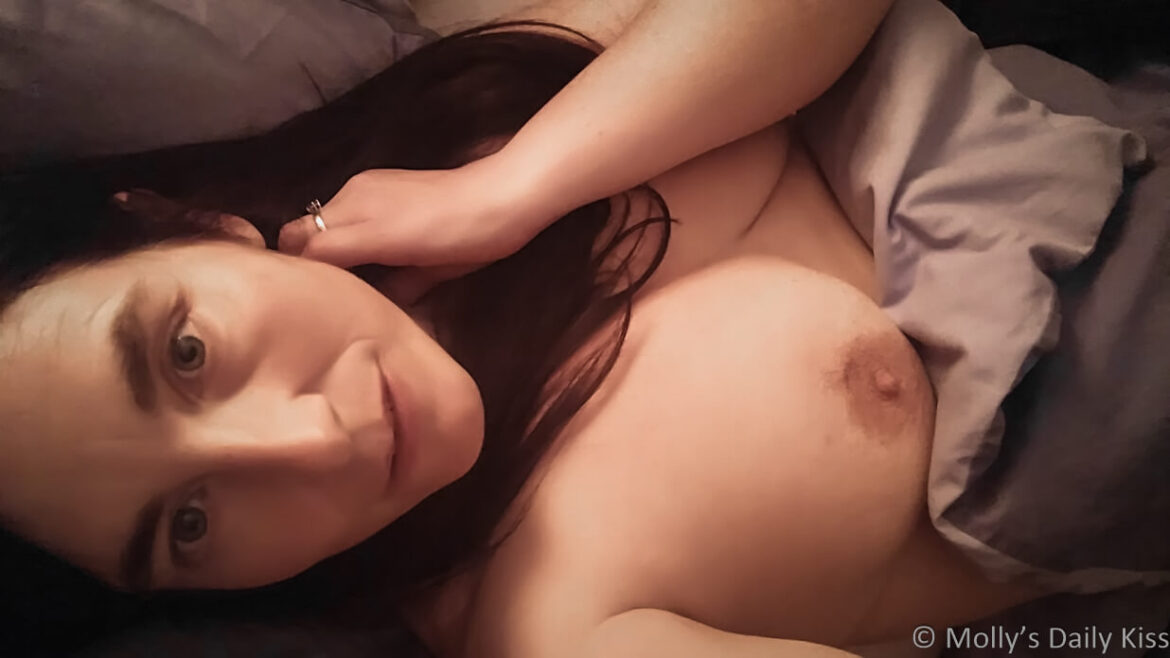 I got my ears pierced when I was 11. I was allowed to get it done when I went from Primary to Secondary School. I remember nagging and nagging my Mum and then one day her suddenly changing from a no to a yes and marching off down to the shops instantly to do it. I was actually a bit scared all of a sudden. I had built it up in my head as something she would always say no too and her about turn caught me out. I got over it quickly though and so delighted with my pretty new ears as a result. When I was 16 I added an extra hole on one side which I wore random single earrings in through out my teens and 20’s.

In recent years I taken to mostly not wearing earring and as a result I am fairly sure that second hole has closed up. The original ones are still operational though and still get use from time to time just not every day.

I have always wanted more piercings though but was mainly too scared to get them. For years I wanted to get my nose pierced and when I met Michael it was something I shared with him but every time he said do it I would bottle out of it. For someone who is often OK with pain it actually kinda freaked me out that was until one day in Camden Market I was yet again bemoaning the fact I never had my nose pierced and he basically steered me to the nearest piercing place and said to them.

“She wants to get her nose pierced”

There was a very brief moment where I considered denying it and bolting from the shop but then I realised he was right and within about 20 minutes I had a beautiful new nose piercing. Top tip: Do not then go out for dinner later that day and eat really spicy foot that makes your nose run!

That was back in 2012 and I still absolutely love my nose piercing to this very day.

Then in 2017 I decided to get another piercing that I spent a great deal of my life wanting but talking myself out of and that was my belly button. Unlike my nose piercing I didn’t immediately fall in love with it. In fact quite the opposite and I very nearly took it out the same day I had it done but Michael convinced me to give a chance and I did for well over a year but in the end it constantly snagging on the waist band of fucking everything doubled with the fact that I never really loved it that much resulted in me taking it out. I have not missed it once since it has been gone.

But that brings me to nipple piercings. I have long thought they were beautiful and a bit like the nose and belly button piercing I have wished I had one but over the years I have talked myself out of it again and again. I have heard horror stories about healing them and getting them caught on clothes and then there is the fact that I worry, like with the belly button piercing, I think they look awesome on other people but on me it just made me sad about the state of my tummy. Will I get my nipple pierced and the same thing happen? I will I just end up being sad because it doesn’t look it does on other people or how I imagine it to look? Or could it turn out like the nose piercing and be something I absolutely adore?

I am sure you are thinking well just get it done and if you don’t like it that it out. Which I could do but I also worry about other things. Might it change the sensitivity of my nipple? (and I am using the singular because at the moment I was thinking of only getting one done) Should I have it done in my favourite boob? (The right one before you ask. It is smaller than the other one and tends to be the one I play with the most) Or the other one? The piercing I had in my belly button has actually left a bit of a scar. Although I will say with time it is slowly fading but what if I get it pierced, hate it, take it out, and it leaves an unsightly scar on my nipple?

But if I don’t do it will I look back and always wish I had done?

It is all soooo complicated and I have no friggin idea what to do so dear reader what do you think; Should I get my nipple pierced or not?

30 Days of Yoga and Beyond

Great post. I just wanted to give some reassurance, I used to have my nipple pierced and took it out as it never healed. It has left a tiny scar but I would be shocked if anyone noticed it as it’s so small. Personally I love nipple piercings (I want mine done again) and think your nipple would look fab adorned.

Go for it… I had mine done years ago but sadly had to remove it when it got an infection of some sort.. I actually still miss it and gave considered having it redone on many an ocassion

It’s a tough decision. Like you, I would really love to get mine done, but I worry about losing sensitivity. And as I enjoy clamps and suckers, I worry I wouldn’t be able to play with them anymore.

I also had a belly button piercing, which I loved but had to remove for surgical reasons, and like you I also have scarring. I used to have a labret piercing, which I adored, but it closed up, again post-surgery. I think I may be more likely to go labret again rather than risk my nips, but I can totally understand the desire. They look fantastic! Good luck with your decision making! 💖

I got my nipples pierced a couple years ago. Best decision I every made. It actually increased sensitivity greatly, which I never expected.
I say do it! You won’t regret it.

Well, I guess you already know what I am going to say: YES, get your nipple(s) pierced.
As for scarring on your nipple… if you look back on my site to pics that were posted before I had my nipples pierced in March this year, you can see there is no scarring, bearing in mind that I had my nipples pierced twice before. So just go ahead, have it pierced and see whether you like it. You can always take it out again 😉

Of course I’m going to say go ahead if you are that interested. I enjoy having one done and not the other. They are different but sensitive in different ways. Mine were never that sensitive before anyway. Even the non- pierced one.
Happy to recommend jewellery afterwards too!
Missy x

It is a tough decision and I can see why you are unsure. I think you should go for it as you seem really interested and I can imagine you with one, but that is easy for me to say when I don’t have mine done! missy x

As someone on the consumption side of the nipple, they can be quite beautiful and definitely attract my attention. There’s a dancer at my favorite club that has some jewelry inserted there that glows in the black light when she’s on stage.

That being said, about half the dancers that I know who have had their nipples pierced now regret it because they’ve lost sensation. We haven’t been able to figure out any commonality, though it is fun having multiple girls drinking at my table with me, tits out, comparing piercings, but it’s not conducive to science.

I have never wanted nipple piercings, but I can see the aesthetic appeal. I can also see how it would be a very difficult decision. Good luck!!

I think you’d look (even more) beautiful with a pierced nipple, but then, you need to do it for yourself! I’ve thought about it but have incredibly sensitive nipples so the just the thought makes me hurt 😐

When it comes to sensitive bits I’m a chicken. Having said that I have tattoos that run over the sides of my ribs and I survived the half hour of that easy enough with gritted teeth.

If you can stand the momentary pain of the piercing, go for it.
If you can keep it from getting infected and it doesn’t impede your normal kinky behaviors, go for it.
If any of those thoughts are issues, don’t.
Beautiful image.

Men’s nips are obviously a bit different, but here’s my experience:
I had one nipple pierced for well over a decade.
It never got caught on clothes or snagged on anything. While it’s healing, just wear a tight bra or t-shirt to stop it moving.
Yes, it changed the sensitivity of my nipple. For the better. When it wasn’t getting played with I didn’t notice it, but she it was played with it felt fantastic. Like a nipple ampifier.
Ultimately mine had to go as it had migrated. I take part in contact sports and the piercing had been hit (and hit hard) too many times.
It has left a bit of a scar, but I doubt anyone else would notice.
I miss it regularly and, in the right circumstances, would definitely get t done again or the other one done.
And I think it looked as good on me as anyone else.