Of shape and form 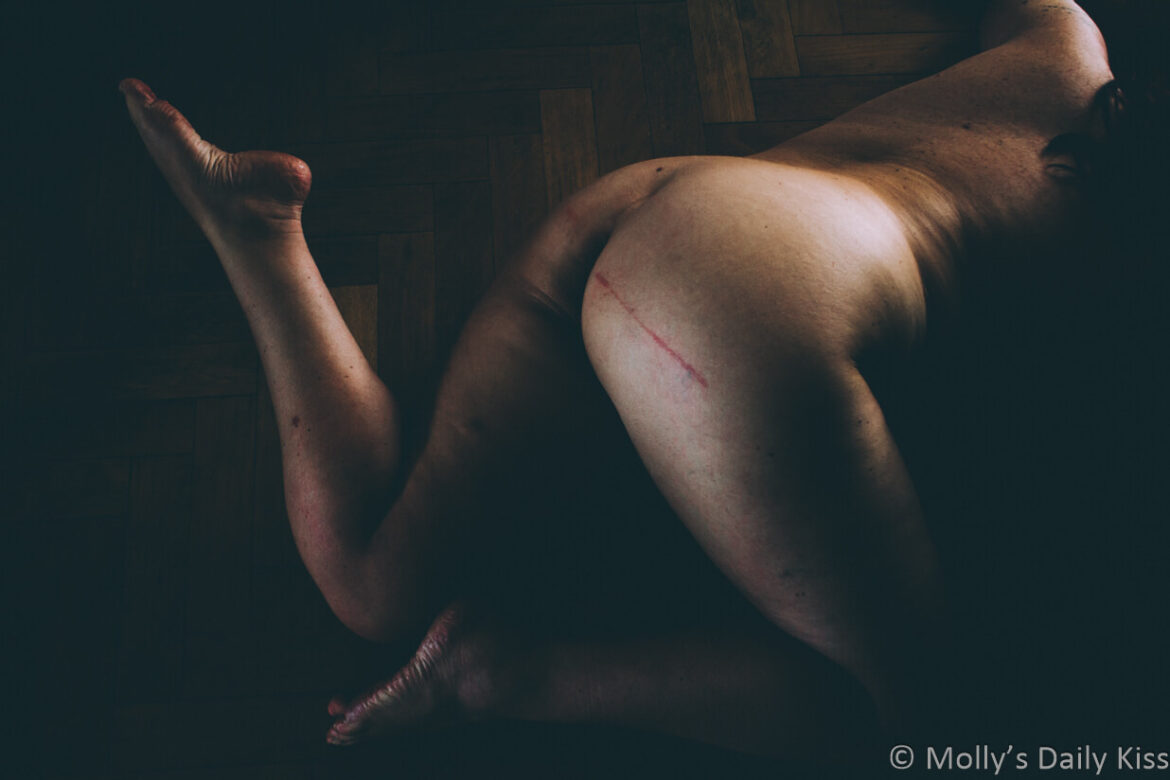 Back in September I posted Part 1 followed up by Perseverance a week later. They were essentially a before and after part of a single whip strike across my bottom. At the time I took more than just those two images but posted those as they really felt like a matching pair. However there was one more image that I got that day which I absolutely love.

I think the light in this is glorious; The way it plays over parts of my body, hip, calve, feet and that evil red welt highlighting them in the image and how the rest of me lingers or vanishes into the shadows makes for a beautiful study of shape and form

However the best thing about this image is the memories it brings back and that even though that welt is long gone it is preserved here for me to look at and remember.

“Photography is a way of feeling, of touching, of loving. What you have caught on film is captured forever… it remembers little things, long after you have forgotten everything.”
~ Aaron Siskind

The scent of him

Love the positioning of your legs and the arch of your feet, Molly. Beautiful photo.

WOW <3 I love how the light and edit highlights all the ripples of your feet! And that dip in your back is sexy AF x

I am wondering if this was taken using light from two opposing windows, and in the later afternoon? However it was shot, the result is stunning! I am envious!!!

Wonderful. Your beautiful curves, the light, that mark. Mmm

Wow, a masterpiece!
The lighting is like something from a Rubens or Vermeer. I’m so sorry n love with this Molly 💞

The red line across your bum just made my whole body shiver. I just imagine it felt like fire when the implement was applied. I want to touch the mark.

What an amazing pose you are in. The red welt is the highlight for me as it stands on so well against your skin. It makes me want to touch it 😊

I almost want to never look away from this image, Molly, it’s utterly gorgeous. Your body is so beautiful with the light highlighting the marks and dips and curves.. it is utterly stunning. The striking mark across your arse makes me have many, many feelings, and the pose you’re in and the colour of the shadow on the bottom of your feet makes me think of delicious dark things. Quinn x

This is an incredible shot. Funnily I didn’t even register the mark at first, I was so taken with your pose, the lighting and the we you create that ‘all overness’ that both flattens your body shape and accentuates its curves at the same time. But, yeah, when you see it… unnnfff…

This is striking (in more way than one hehe) how did you decide on the name of the pic?

This striking image captures exactly what I would like to experience someday. I single strike that leaves a mark.

Brilliant image, a piece of art on its own. Love the pointed toe, and the angry red line across your bottom. The light in the image is perfect.

Fantastic study of shape and form indeed, makes me want to sculpt or paint you!! And that welt…gives me shivers of the good kind…

Wow. Everything about this is stunning. Makes me think of a antique oil painting. Wonderful capture!

The pose you’ve struck reminds me of the figures on greek urns. The welt image is intense indeed.

I love everything about this image. You always gave a unique perspective when taking your photos. The contrast of darkness and light is so inviting.

Oh, Molly, what an image! You’re right about the light and shadows (glorious!) but also, I love that it brings back wonderful memories. Those are the best pictures.

I love the murky lighting and that one red line. Very very powerful.