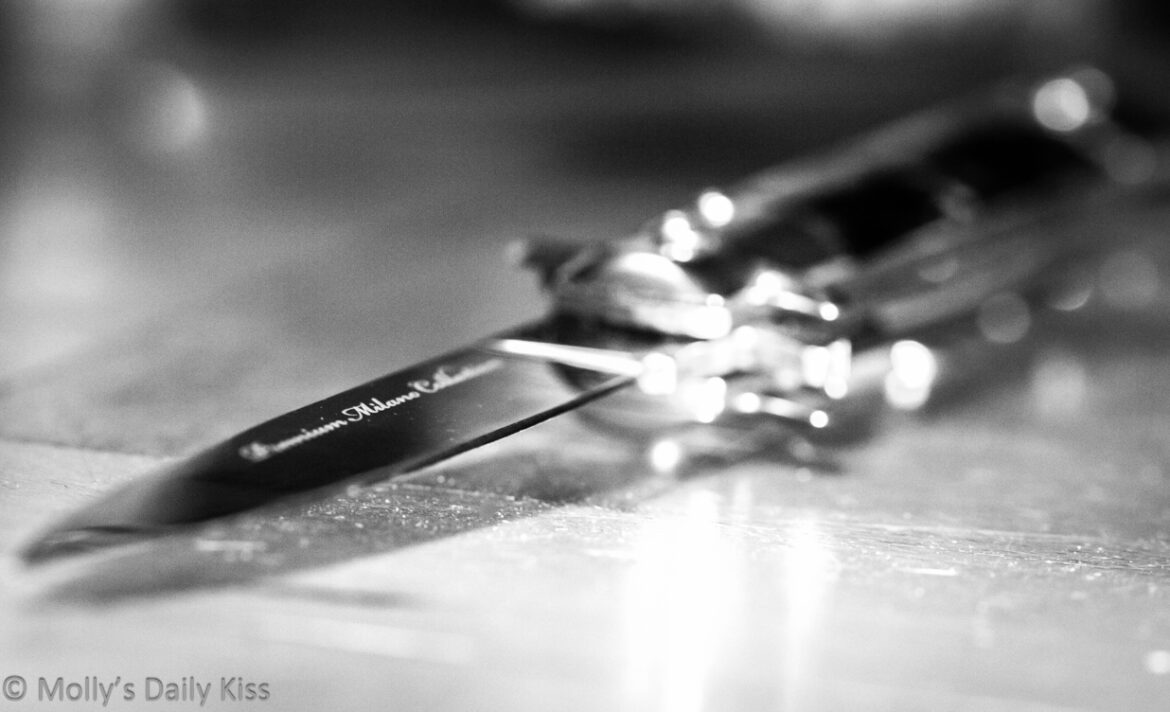 and it calls me

a whisper at first

“let me loose the red that lies beneath the surface”

I hear its voice, louder and louder

“You both need it”

and it calls me

but I think that whisper

When I told him that the prompt this week for Wicked Wednesday was whispers but that I was struggling to think of something he smiled and told me he might have something for me as long as he could get the words right. A couple of hours later the above piece appeared in my Skype.

Is there any more? I asked

“Nope, that is it. Maybe you can weave something around it or you can continue it on.”

As he spoke I could see his eyes where fixed on a spot on the carpet in front of him. Glancing down to see what had got his attention that is when I realised that his words were not fiction, as I had originally thought because there on the carpet lay the knife.

I have to lean slighty forward at my desk to see it but when I do the lights are reflected in the metal and give off a little twinkle. I have a feeling that twinkle is matched in my eye as I image the handle sitting perfectly in his hand and the way he looks at me as he opens out the blade. Now his eyes twinkle and my heart beat jumps a little. He keeps the blade sharp, this is not a costume knife, made to look pretty but ultimately safe, nope this not that at all.

The blade is cold against my skin but as he applies pressure and draws it across my flesh it leaves a trail of burning heat in its wake. Sometimes he retraces his step, going over one spot again making me cry out with the intensity of the sensation which feels like he is splitting my skin open. And sometimes he is, well not exactly splitting it open but applying just enough pressure so that little beads of blood decorate some of the welts.

I still have a mark on my right buttock from where he underlined the word ‘mine’ which he has scratched into my skin. The ‘mine’ has gone but for some odd reason that line has lingered for weeks and weeks. If I showed you I suspect you might have trouble finding it but after a shower or a bath it shows itself again. I suspect it will go away eventually but like the knife marks he left on my arms once I think it will be months before it vanishes altogether.

It’s funny though, before he sent those words to me I had barely noticed that knife and now, now I can’t get it out of my head. Now I can hear it whispering too…

Me and my camera

To Protect and Serve

As something I have not tried, knife play intrigues me. I have a friend who used to do it but I never really have asked him about it. Were you and Michael separately into it before you were together? Or is it something one of you has got the other involved with. Hope u don’t mind me asking 😉 x Interesting post x

I love the personification in this piece! Also really like that the line lingers there to remind you, even when the words are gone.

I love the way you’ve woven the two pieces together, and fulfilled the prompt so beautifully.

i enjoyed this post – and i could almost hear the whispers too. Well done.

Oh yes, I can. I hear it whisper loud and clear…

I love that he whispered those words by skype to you. I know how persistently that knife will be whispering to you.