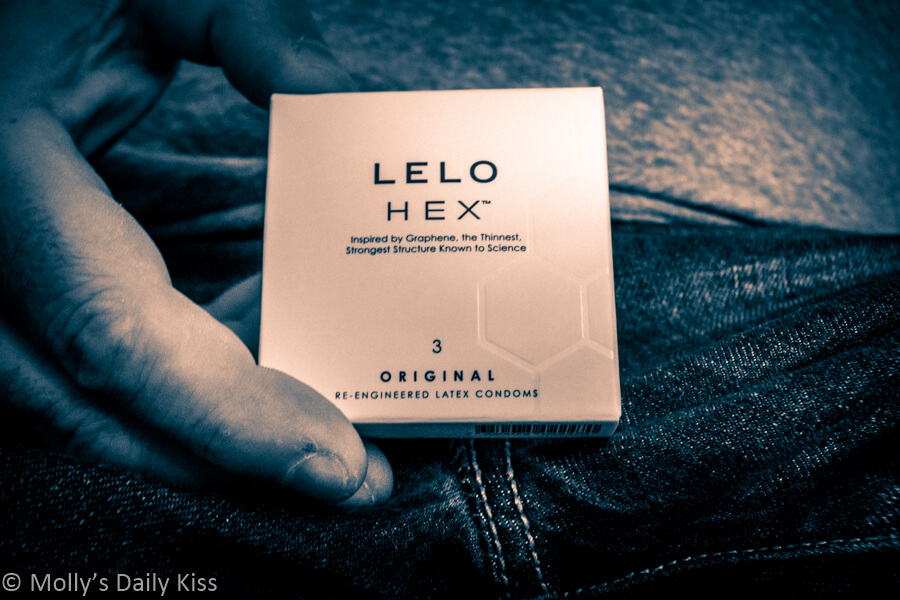 Last Thursday we went to the Lelo Hex launch in London. I was in two minds about going. We only got our invite on the day that the Charlie Sheen association became common knowledge but in the end we decided to go and see if the product itself was all that it was cracked up to be.

I have no idea how much this little event cost Lelo but if the amount of alcohol that was flowing, the teeny tiny poncy canapés being handed around and the exclusive central London location is anything to go by I am going to assume the answer is, a shit ton of money; Which is a thread that features quite a bit when it comes to Lelo’s Hex condom in my opinion.

As well as the booze and the smallest food in the world there was also a giant ice sculpture of one of the condoms which had the word ‘respect’ carved into the base. It was only later I learned that is because the word is also on the base of all the condoms. So far my research tells me that when asked why, Lelo replied with a slightly dubious statement “Respect the man who wears it”. The pseudo-scientists were also out in force at the launch, offering to demonstrate the ‘pin test’ and showing off Hex condoms filled with water. I call them pseudo-scientists because when asked actual science based questions about any studies they have done on STI transmission compared to other condoms they came up blank and hurried off to find someone who might know the answer (In case you are wondering they have done none, so there is no way of knowing if the Hex Condom is better at reducing STI transmissions if it breaks than any other condom) What they have done is make a condom that passes the FDA tests allowing them to sell it as a condom. Any other super-duper claims are their own.

Finally in the corner of the room there was a cluster of sofas roped off from the rest of the guests for VIP folks, basically Sheen and entourage. He did seem to have a stunning amount of muscle with him considering it was an invite only event and there was a big show of them clearing the way through the crowd so he could get to the bar. There was something so horribly staged about it that made me laugh out loud.

Around 9pm one of the founders of Lelo took to the stage and gave a short speech. I can’t really tell you more than that as it involved a lot of umming on his part and it was not easy to hear as lots of people continued to talk throughout it. He was followed by Dr Christian Jessen, who presents a TV show in the UK called Embarrassing Bodies. He talked about the rise of STI’s the importance of safe sex and for me most importantly of the need for good sex education to tackle the shame and stigma still associated with sex and sexual health. However he spoiled all that fabulous talk by ending his speech praising Charlie Sheen as a ‘extraordinary wonderful man’. Then we were treated to a viewing of the Charlie Sheen promo video. The weirdest thing about this moment for me was that Sheen stood right next to the big screen and seemed utterly enthralled with his performance. I don’t know if that is a normal thing for actors but for someone who cringes when watching her own review videos it felt like a whole new level of narcissism to me. Which was pretty much confirmed when Sheen took the stage and told everyone how moved he was watching himself. Don’t get me wrong, I am aware that confronting ones HIV status must be a truly challenging and difficult thing but when it’s being presented as part of a sales pitch then I am a little more dubious. We were then invited to enjoy the rest of the evening at which point we decided that would be best done somewhere else and collected our goody bags and left.

So let’s talk about the actual condom. We tried to give one a go yesterday but this happened. We will try again, maybe next week when the kids are away but from our initial assessment it felt to both of us pretty much like any condom ever. If we do give it a good going over our thoughts change I will come back and edit this piece.

However I do have some concerns about the condom itself. The hexagonal internal structure of the condoms means that if it gets a hole or tear that damage will be confined to one small area only and not, like most condoms, cause a complete collapse of the whole structure. It sounds like a good idea. A condom that even when damaged or broken holds its shape. What a fabulous thing! Or is it? If a condom breaks when I am using it then I really want to know about it because then I have options. If I am worried about pregnancy I can get a morning after pill and if STI transmission is a concern at least I can be aware of the fact that I might have been exposed and can get tested. As with most germs the earlier you know about them the easier they are to manage and get treatment for. With the hex condom I think there is a real risk that you could be utterly oblivious to any breakage and in my mind that is pretty huge problem.

This is really problematic for me. Sheen is deeply flawed character in my opinion. He has a fairly long history of abuse and violence towards women for which he has found himself in court on a couple of occasions and he also has expressed some fairly unpleasant views on sex workers. Then there is the drink and drugs and finally, and this one really pains me, there is the fact that he knowingly exposed a number of partners to HIV.

Of course someone can redeem themselves. It is completely possible to turn over a new leaf and start off afresh. I fully believe that people deserve the space to be able to do that in their lives but a big part of that is expressing remorse and regret for your past shitty behaviour and Sheen has never done that. The only thing he seems to be sorry about is that he contracted HIV, even saying at the launch, that everyone wants to be like him, just not that one thing about him. Really? I fucking hope not, because in my mind that means you aspire to be a narcissistic drunk with a tendency to use your fists on the women in your life when you get angry.

I can’t quite decide if Lelo thought this all through and decided to use him anyway because “all publicity is good publicity” or if they made their decision on a far more superficial level: Famous + HIV = Perfect ambassador. In my opinion neither scenario reflects well on Lelo.

The name is horrible. I understand that the name comes the hexagonal shape of graphene, but this condom isn’t made of graphene. Putting a hex on someone basically means to curse them and is not really an association that works with a product that’s primary purpose is to prevent pregnancy and STI’s.

These little rubbers are also a fairly pricey prospect. You can currently get them for a reduced amount if you are happy to pay up front by joining in with Lelo’s crowd funding but you will have to wait until August to actually get one on your dick (or your partners dick). Once they go on sale in September they will £15.00 for a box of 12 which works out at £1.25 each, which is substantially more than most other condoms. They range from generic supermarket condoms at about 55p each to branded condoms at £1.00 although there is plenty of variety available for about 85p a pop.

Despite all these problems I also feel that anything that highlights the conversation about condom usage, safe sex, etc is a good thing and if the Hex Condom does that in any way or encourages even one person to use a condom who would not have done so before then that is a good thing. I am not convinced that Lelo have truly re-engineered the condom but they have certainly created an interesting product that does have huge potential to be a positive thing but As Bryan Menegus at Gizmodo summed up so perfectly in his article: “Safe sex is important, and everyone should wear a condom. It just doesn’t have to be this one.”

Some other people have also written about this subject and so I thought I would link to those as they all interesting, intelligent, thoughtful pieces.

LELO HEX: You’re Not #Winning Us Over by Sarah at Marvelous Darling

When A Condom Fails: LELO HEX By Cara Sutra

I’m a Survivor, and I Will Never Support LELO Again by Formidable Femme

What the Hex!? Our Thoughts on Lelo in Bed with Charlie By Sh Woman’s Store

Lelo does it again by Toy Meets Girl

Hex, No – Why I’m Done With Lelo by Ninja Sexology

Reading through your post, I came to the same conclusion: “Safe sex is important, and everyone should wear a condom. It just doesn’t have to be this one.”

The fact that Charlie Sheen is associated with this condom totally turned off any interest I had for the product.

“Putting a hex on someone basically means to curse them and is not really an association that works with a product that’s primary purpose is to prevent pregnancy and STI’s.”

OH MAN. I didn’t even THINK of this!!! Wow yeah what a really bad name!

I am always pleased if I have inspired a giggle or two with my words!

I too am embarrassed to admit “put a hex on them” never occurred to me!! Nice one 🙂

Oh I know I won’t be using those. I have had condoms break in the past. it was an instant stop and evaluate. form all you said I don’t think they really thought it through too well.
thank you for the post.

Just adding to your comment on the name Hex, Zak Jane Keir had a wonderful ending to her post on the subject (at http://www.dirtysexywords.com/how-to-hex-yourself/) … “I don’t want my important little places infested with demonic energy, either.”

How could a company go so damn wrong?

[…] sponsors was LELO. The gift bags for non-VIP ticket holders included two HEX condoms. HEX condoms are not nearly as safe and wonderful as they claim, and their spokesperson is Charlie Sheen. This is NOT in line with feminist values. […]