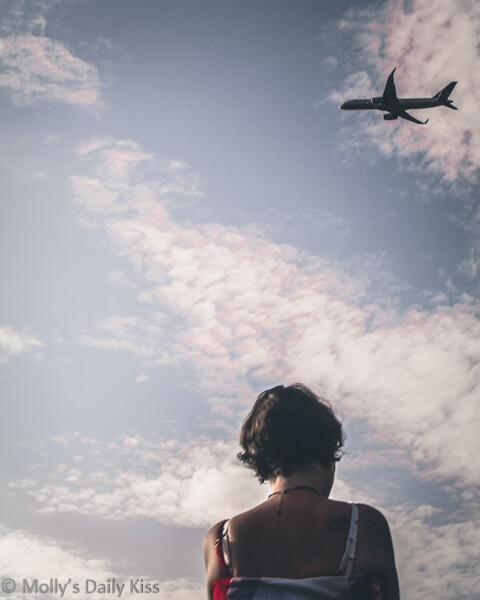 The pool is heated which is important in the England, but it is a sunny day and they have opened the roof to the world. I am floating around on one of those noodle things when a plane takes off. We are right on the edge of Heathrow and so this is not a little plane but a giant beast of a thing and as it lurches up into the sky it is so loud you can feel it inside your chest. My eyes widen, I continue to bob around on the surface but I want to clap my hands with glee and shout for the next one to thunder down the runway and tear through the sky.

This is the best naturist/swingers club in the world in my opinion because I lay naked in the sun, or fuck in the pool and watch planes take off from Heathrow airport. In fact Michael always teases me about the first time we went there. I had been many times before with a previous partner but this was Michael’s first trip. He knew I liked planes and once we were there he knew I would watch each and every one but he always teases me about the moment we were fucking in the pool, his cock buried deep inside me, the hot water cradling us as we stared into each other’s eyes and then a plane took off and for a split second I broke eye contact with him…. In my defence it was a really big, loud, low one but apparently that is yet more evidence of the fact that I am a size queen.

I wouldn’t call myself a size queen when it comes to cock (but that is a subject for a different post) but if we are talking airplanes then yep, the bigger and louder the better as far as I am concerned. There used to be a small aerodrome on the outskirts of my town and I visited a few times. Whilst it was fun to watch the little planes bob up into the air or drift down onto the little runway it didn’t give me the same thrill and excitement that a fucking great big jumbo jet does.

I don’t know when my love of planes and flying started but over the years it has definitely intensified. As an adult have always had strong desires to ‘run away’ not really in the disappearing sense but in the travel and explore sense. I love going to new places and I love going to old places that I am drawn back to. It is one of the biggest regrets of my life that I failed to grab those opportunities when I was young and go travelling but instead decided to settle down, get married, have kids etc. As I got older that urge to go somewhere, to do something, to break out of the cage that had been constructed around me grew and grew and when I finally got divorced I started to look towards achieving just some of those things.

You need money to travel though as a newly divorced single parent with no career or professional qualifications to fall back on I was not exactly swimming in money but I saved hard and then along came Michael and the destination of my first ever trip outside the UK without my parents or my ex husband was suddenly obvious. America, Philadelphia, here I come.

I can remember that feeling of excitement when I got the airport. I will point out now that I hate all the security, immigration, stuff it makes me anxious but departure lounges, they are special places of joy where you are forced to wait surrounded by bookshops and then when that gets boring you get to go to gate where you can stand with your nose pressed up against the glass and watch the cumbersome hunks of metal defy gravity and take to the air where they become graceful beasts that disappear off to exciting destinations unknown. Yes I am THAT person at the airport who will sit and watch the planes and who is disappointed if the gate I am sent too does not afford me a view of the runway.

Then there the actual flying. The little charter flights to Europe where there is no complimentary food or drinks and you are packed in like sardines don’t quite do it for me in the same way an international scheduled flight does. I love having my own little screen, getting my meal and having whatever I want to drink and when I used to travel to see Michael I discovered that flying alone was actually a self-indulgent luxury where all I had to do was sit back and enjoy and while away however many hours it was reading, writing, watching movies and napping with no one calling me Mum, telling me they are bored or asking how much longer it was until we got there.

Regardless of what type of flight it is I adore that moment when the plane lines up at the end of the runway and there is that slight pause and you know the pilot is waiting for the final go-ahead to take off and then the whole plane lurches forward and you are pressed back into your seat as the engines roar with power and propel you along the tarmac towards your fate. Which is when I always I think, this is utter madness, me and all these people packed into this metal sausage hurtling along hoping that this beast gets itself off the ground successfully and then stays there until it is time to come down again. But it is not fear it is an odd feeling of hope and excitement and also a strangely comforting sense of fate that whatever is going to happen is going to happen, it is out of my hands and there is no turning back now.

At the other end of the flight there is that excitement of seeing your destination from the sky, as long as the weather is playing ball, and then that juddering thud and if you are landing in a hot country that intoxicating squeal of rubber on tarmac as the wheels make contact with the ground which signals that you have arrived. Coming home does not have quick the same kick as getting there but I still sit glued to the window (if a window seat can had) through the whole thing.

I should also mention the time Michael and I flew to Philadelphia on Christmas day. It remains to this day the best Christmas day EVER. A half deserted Heathrow airport, staff that seemed to be happy and jolly to be working on that day and a half empty plane that resulted in us getting an upgrade into business class where I indulged in fair few glasses of champagne and enjoyed a surprisingly good Christmas dinner courtesy of British Airways. Oh and off course places, big hulking airplanes, one of which had me on it.

I have never managed to have a wank on a flight or indulge in any sort of sexual activity with Michael but it is definitely on our list of things we would love to do. Sadly too much travelling with kids has made that impossible so far but one day I hope we get to indulge in some sort of naughtiness.

Maybe I am secretly a frustrated pilot. I have thought about going on one of those flying experience days but it doesn’t really appeal because it would be in one of those little planes and they really hold no interest in me, they don’t look or feel exciting, they don’t look like they weren’t meant to leave the ground, they don’t make THAT noise that rips through your chest as it thunders over top of you, they don’t take you to destinations far away.

When I started this post I thought it would be a few hundred words about planes and flying with a funny story about a swingers club and me being distracted by the planes taking off, instead it has turned into a nearly a 1400 word long love letter to the magnificent jumbo jet, all the ones I have been on, all the ones I have watched with rapt fascination as they have taken to the skies and all the ones that I will one day hope to go on.

Me: Does the post capture that buzz I feel about planes

Me: It is not a kink, I just like them

Him: Are you kidding me, if you got the chance to lay on the grass at the end of the runway and wank as the planes took off over you, you would be there in a heartbeat

Me: *eyes widen at the thought….. OK so maybe a little kink then.

Not playing the game

But can you imagine sex in the plane as it takes off?? That would be the ultimate. I love that moment, but that will never happen- all those other people and rules and stuff- boo.

I agree with Michael, this is definitely a kink of yours. But, then again, the thought of lying at the end of the runway wanking while a plane takes off is quite an appealing one! Love this post that drips with enthusiasm!

I had a similar experience to you in that I always knew I should be travelling – flying to foreign parts but did the family thing first. Now the time has passed and I am free to explore the world. Loving every new travelling experience. It seems to meet Michael was your destiny…
I did once get my mans cock out on a plane. He had a window seat and I didn’t have anyone sitting beside me. A jacket hid it from any passing stewards view. But I just played a bit. Fun though.

As soon as I saw the opening line I knew exactly where you were and I too have spend hours bobbing about watching planes.

Whilst i’m not keen on the actual flying part, I fucking love planes too but then I suspect you may already know that *laughs

Airliners are like buses; stuffed with people who wanted to go to a specific spot, and they’re boring. Little airplanes are like little cars; maneuverable, driveable, and fun.

We will have to agree to disagree on that one. For me they are exciting in so many ways but mainly because they take you to amazing places

Thank you for sharing these lovely vignettes from your life, Molly. Maybe you can charter a plane one day for similar kinksters – a group Mile High Club.

You would love Gravelly Point. It’s a pretty park near Regan National Airport in Virginia (DC). It butts up to the runways and the planes take off and land right above your head. They are so close you can’t fly kites in the park. As a fellow plane enthusiast, I’ve rarely seen/felt anything like it.