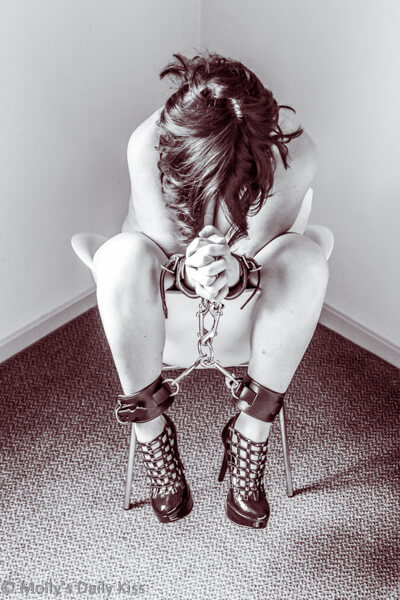 Back in 2014 when I first started February Photofest Penny had the idea of doing Throw Back Thursday; Taking a previously used/old image and re-editing it to give it new/different life. I adopted the idea back then, continued it in 2014 and this year here it is again. It is something I tend to do to images from time to time anyway. As my editing skills have developed it can be good to go back and apply new knowledge to previous work. Sometimes the results can enhance an image and sometimes they can completely transform it, altering its ‘heart’ or even the very narrative of the picture.

This image was taken back in 2011 ( I really can’t believe it was that long ago) in a hotel room in Birmingham when were there visiting the Birmingham Bizarre Bazaar. It really does only seem like a yesterday, but there you go, I guess time plays tricks on you when you have fun. You can see the original edit on this post: Really Living. It has always been one of @domsigns favourite pictures of me and so when I decided to re-edit it I did wonder if he would continue to prefer the original or if I could win him over to a new version. From what his reaction last night I think I have managed the latter. Now it is your turn to decide, for the record I love the original but I absolutely adore this new edit.

The Power Of No

On the 14th Day of Kinkmas…

The End of Days

In the Company of Nature

I prefer the black and white, it adds an artistic feel to a beautiful image.

This is a beautiful edit!

Just stunning! And those shoes… wow!

I love these shoes too, they are really comfortable as well but sadly the patent shine is peeling off them

Oh my, that’s fucking wonderful! I have a massive thing for having my wrists restrained, it’s a real pleasure zone, or if Sir is holding my wrist tightly, it’s soporific, calming, and centering.

I love this edit! And the shoes, swoon! Oh Molly dear, I can’t WAIT till l can wear heels again.

I’ve been contemplating doing the TBT thing…I’m sort of inching my way sideways towards it.

Ohhh yes, I love the color and tone in this edit–it’s such a fantastic shot!
xxPenny

Love them both, for sure, but they convey slightly different messages, the first is softer more vulnerable, this one is harder, waiting or wanting to be broken… or maybe I am projecting, who knows, but I really admire your talent, hard work and sexy eye for detail and … well lots really. humbly, twigs.