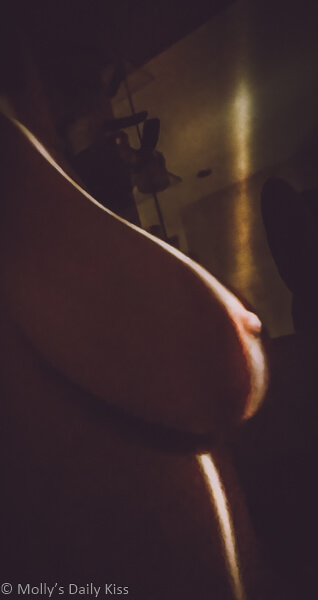 This is not the best image resolution wise but that is because I took it on my phone. It was very late at night and I was in the bathroom brushing my teeth. The only lamp on was out on the landing giving just enough illumination for me to see by. As I stood in front of the mirror I noticed how the door frame was letting the light through in a line and that as I moved and turned that line of light ran over different parts of my body. For a brief moment I thought about going to get my proper camera but it was 1am and that seemed like a lot of faffing around so instead I grabbed my phone and took about half a dozen images. Most of them failed to capture the moment mainly because I had not used a tripod and holding the camera in my hand meant it was too close. I do at some point intend to retake them using my proper camera but in the meantime I couldn’t resist sharing the one image that did turn out rather well in my opinion.

“Wherever there is light, one can photograph.” – Alfred Stieglitz

I know that’s a beam of light shining ON on your nipple but I prefer to think of it as shining OUT, like you have SUPERHERO TITS!!!! Xx