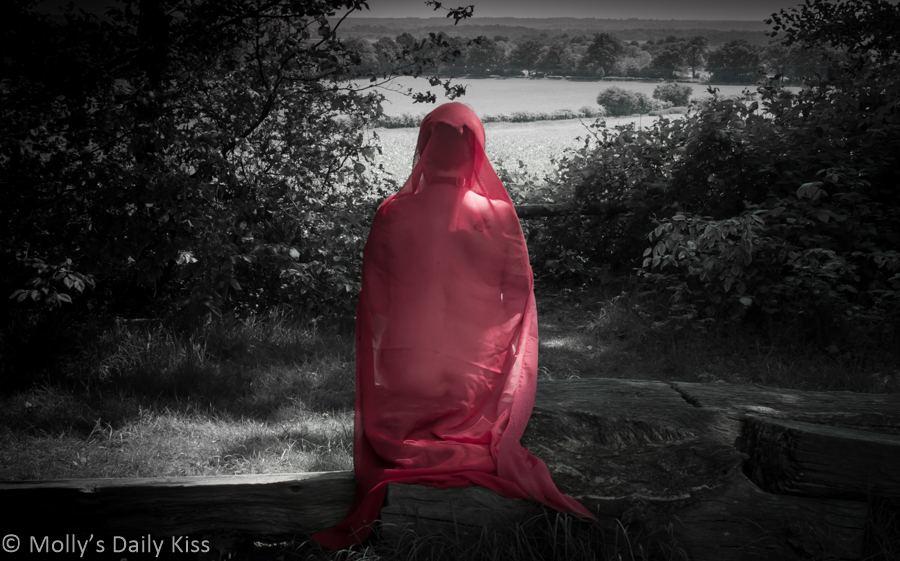 Once upon a time there was a young woman called Red, you will know her as a gullible little girl who ignored her Mother’s warnings and allowed herself to be tricked by a wolf but was rescued, along with her Grandmother from the wolf’s belly by the heroic Woodcutter but Red’s story does not end there.

Many years later when Red was 21 her grandmother passed away and left her the little cottage at the edge of the woods and so Red packed up her few possessions, gathered her red cape and left her Mother’s house in the village for a new life in her own home. Red loved her little cottage, she grew vegetables in the garden and kept chickens in a pen and each week she would use her home-grown produce to make delicious things to sell at the market in the village. With the money she made she would buy other food supplies she needed, feed for the chickens and if anything was left over she would buy something special for herself; red paint for the front door of her cottage, red velvet for a new winter cape and red chiffon for a summer one.

Life rolled on for Red, sometimes the little cottage felt a bit remote from other people but it didn’t really bother her that much. Red was very happy and content with her home and the vast woodlands that surrounded her which she would spend many hours of her day exploring.

One bright summers day Red set out from her cottage with her red chiffon cape flowing from her shoulders and an empty basket swinging on her arm in search of the early ripe blackberries that grew along the woodlands edge which are perfect for making jam. She spent a happy morning gathering her bounty and enjoying the heat of the day before finally heading towards the little river in the valley. Once she got there she discarded her cape and dress and swam naked in the cool crisp water and then sat on the grassy bank and ate her lunch. That was when she first saw Rufus.

She was sitting so quietly he didn’t notice her as he stumbled down the path to the edge of the river, dropping to his knees and dipping his hands into the water he scooped up the clear liquid again and again, drinking it down as if he hadn’t had a drop in days. Eventually he seemed to satisfy his thirst and after a brief pause he pulled his shirt up over his head to reveal a strong muscled back to Red that was covered in bruises and cuts. The sight of his naked torso made her gasp causing Rufus to spin round in search of the noise. The moment his eyes landed on Red his expression changed from what she believed fear to one of relief, but then Red knew nothing of men.

Rising from her spot on bank she approached the young man.

The man nodded his head in agreement and together they set off through the woods to Red’s little cottage. They walked in silence but Red kept finding herself stealing glances from beneath the hood of her cape at her new companion. He had a thick head of cinnamon coloured hair, the most amazing almond-shaped eyes and a broad handsome nose and the more she looked at him the more she was convinced that he reminded her of someone, but for the life if her she couldn’t think who.

When they finally arrived at the cottage Red stoked the fire and put on a large pan of water to heat which she poured into her tin bath, gathering towels from the cupboard she told the young man she would go out and tend to her garden while he washed himself and that on her return she would bandage any of his wounds that needed it.

She stayed outside for over an hour, wanting to be sure that she had given him plenty of time to bathe and dress again. When she returned she called out to the man before entering her little kitchen which was now growing dark as the shadows of dusk started to creep in. At first she didn’t see him sitting in the chair by the fire but when she called out Hello? he stood and faced her and he was, to her wide-eyed amazement still completely naked

“Don’t go” He called, “you said you would help me, my wounds are many and my clothes are torn and muddy. Please…. ”

His pleading softened Red’s already tender heart and so rather than leaving, as she probably should have done, she set about tending to him as she had promised. Whilst she cut and tied various bandages and rubbed ointment on the worst of the deep purple bruises on his ribs and back she asked him where he was from, and how he had ended up getting so badly hurt. His answers about far away villages, thugs and bullies sounded like something Red should know about and so she nodded in a concerned manner and tried to look like she understood. When she finally pulled away from him he inquired after her name

“What a pretty name, it matches your lips and maybe your cheeks now too” he said with a grin

“I feel like I know you, but I don’t know how” she blurted out.

“I don’t think so pretty Red,” he purred back at her, “I would remember you”

“What’s your name” she demanded

“Rufus, Rufus Canis…. any the wiser?” He taunted

Red stood silently suddenly deeply unnerved by his naked presence in her tiny home but before she could object he covered the small space between them with what felt like one stride and now stood so close to her that when she did speak she could feel the warmth of her breath bouncing back of his chest onto her face.

“You, you shouldn’t be here” she stammered

“I think I want you to go now”

“You are too big for me, for this space, you fill everything up. I don’t know what to do with you”

“Let me show you” and sweeping Red up into his arms he bought his lips down onto hers in a greedy demanding kiss the likes of which Red had not only never experienced but never even imaged as something that was possible.

“Does that help at all?” he asked, still holding her in his arms

“Ummm, I… you have such big shoulders….”

“All the better to pin you down with my dear”

“And your hands, they are so large and rough.”

“Indeed and will feel so good against your soft flesh.”

“And that,” glancing down at his cock, “Well, it’s bigger than it was a moment ago?”

“All the better to fuck you with” he growled in reply

And he did… over and over again until the first light of dawn broke through the windows of the cottage and they feel into a contented exhausted sleep together in Red’s little bed.

At first Rufus was a pleasure to live with. He dotted on Red, helping her in the garden, digging and cutting whilst she cooked her delicious wares for the market and then at night he would teach her to please him and herself. In the morning she would often wake covered in bruises and bite marks but Red found she liked that and she would often tease him in the hope of igniting his greedy passion for her. However as time wore on Rufus voracious appetite started to extend to like other things, he ate vast amounts of her food and demanded she spent her left over market money on buying him his brew until eventually Red refused. The brew made Rufus grumpy and the more he drank the less time he spent enjoying the pleasures of Red’s body but when she refused he started stealing the money from her little purse at night and disappearing off, for sometimes days at a time, to the village to get his fix.

Red was no longer happy and one day decided that it was time to send Rufus on his way. When he returned from the village she waiting for him. She told him of her decision but he was having none of it. She knew Rufus had a mean temper but his spitting, growling refusal to leave scared Red so much that she found herself reaching for her kitchen knife and brandishing it at him but he  was not in the least bit phased and with one swift swipe knocked it from her hand and before Red could even cry out his large calloused hands closed tightly around her neck.

Rufus was not in the least bit sorry for what he did to Red, she had, despite his convincing act otherwise, only ever been a means to an end for him. He gathered up her limp lifeless body and set off into the woods with it, finally leaving it in a thicket of thorn bushes high up in the woods before returning to the little cottage which he now considered to be his.

When he next went to market people asked where she was but he told them such a convincing tale of how she had run away and left him that they believed him. He even showed them a note she had penned for him, that she had in fact been written to tease him into hunting her through the wood, but that he now showed off as his proof of her feckless ways

You will never find me no matter how hard you look, I am better at this than you…. it read

So now Rufus lives in the little cottage at the edge of the woods. He thinks he is happy and safe, living off of Red’s belongs and deflowering ever pretty girl he can get his hands on in the surrounding villages but this is fairy tale land and strange things happen here, for up in the woods sits a ghost of a woman, watching and waiting, taking in every detail of what she sees and planning a blood-thirsty revenge because Red now knows that you should never trust a man who, when you look into his almond-shaped eyes, reminds you of a wolf you once knew.

Categories
Bloggers who rock!
Archives
I Also Write For…
Top 100 Sex Blogs of 2018 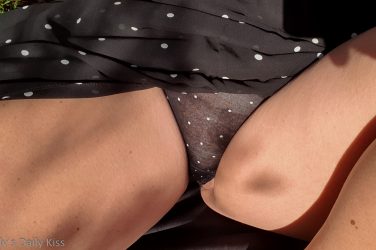 A couple if weekends ago I visited my Mother. It was a beautiful warm ... 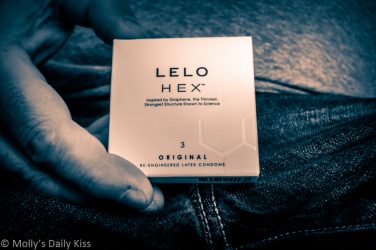 Last Thursday we went to the Lelo Hex launch in London. I was in ... 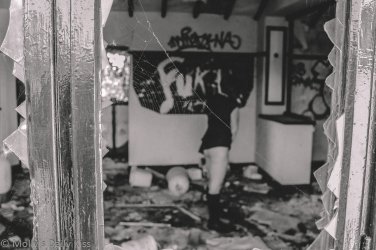 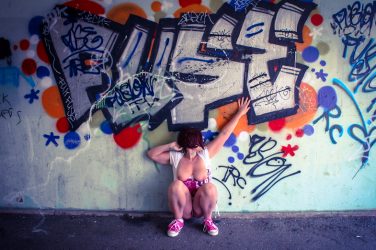 Day 6 and for this one I am using a selection of different images ... 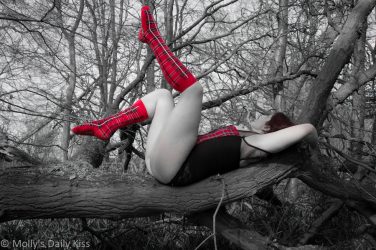 Kickin’ Up My Heels 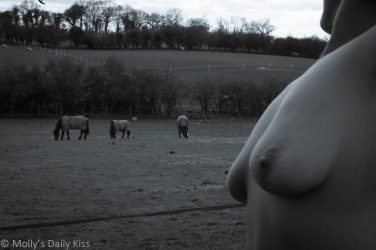 When I first saw that the current kink of the Week was Pony play ...