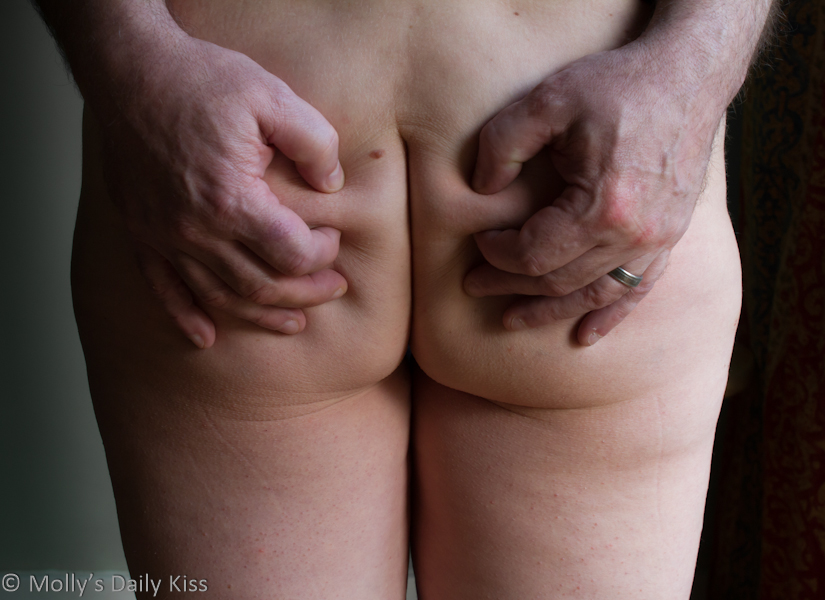 I have come to the conclusion that kink of the Week is a risky business at it quite often leads to me expressing an interest in some sort of activity in order to help inform my writing with recent memories. On more than one occasion this has resulted in me getting a lot more reminders about the kink of the week topic, as well as others, than I had anticipated.

However, pinching was not one I needed reminding of as it is a something that is a fairly regular occurrence in my life. I have come to the conclusion that if anyone has a pinching kink in this house it is not actually me, but him.

He loves to pinch, it tends to be his weapon of choice when he looking for quick reprimand or reminder, especially in public. It can be executed swiftly and easily and, unlike a spank, can be done without anyone really noticing and even if they do notice what they actually see is a woman giving a tiny little startled yelp for what appears to be no apparent reason. This seems to be one of the attractions for him, as it is that little yelp and physical jolt that always makes him chuckle, regardless of whether it is in our kitchen, the local supermarket, the train platform or even queuing to board a plane. On that occasion a couple of people nearby saw my little twitch and then looked at me like I was utterly insane. I am fairly sure they thought I was suffering from some sort of Tourettes or at the very least of a nervous twitchy disposition and seemed to look at Domsigns with a, ahhh poor you expression! The idea that I look like the nuts one out of the two of us is also something he finds highly amusing.

I am also continually amazed at how effective he is at the pinch. Even through my jeans he can wield those fingers in such a way as to make me feel like someone just stuck a pin in my arse and no he does not have long nails either, or even any significant nail to speak of. He keeps them very short, which I think is because a long history of nail-biting means that is how they feel ‘right’ to him. Even with short nails though he truly has the pinch down to a fine art.

For a long time after he came to the UK he used to delight in pinching the side of my leg every time we went over a speed bump in the road. it got the stage where I would even take a slightly different route home in order to avoid them and The Pinch. Interestingly rather than seeing this as disobedience or lack of enjoyment on my part he actually thought it was hilarious.

Now the other thing I have learnt from Kink of the Week is that even if you don’t end up asking for a reminder of some activity you still might end up asking for help to create an image to go with your post and that leads to conversations like this….

Me: If I set up the camera can you fake pinch my bum for me so I can get a shot for Kink of the Week?

Him: “Sure” *possibly accompanied by an evil grin

Me: Sets up camera, takes practise shots, asks politely for him to stand in front of me, guides hands into place, asks if he is ready?

Me: Go! Takes 3 shots….. screams owwiiieee and jumps away… “That wasn’t fake pinching!”

Him: “I know, I never agreed to fake it, that would be wrong, I just agreed to help.”

Me: *walks away rubbing sore bum and cursing @piecesofjade

I adore the fact that you thought you could stage a photo.

Pinching is something that I really love and hate. Mostly I love it but there are a couple of places that I don’t like being pinched. It always gets my attention.

Haha, I can just imagine. This seems like such a personal accounting of you two, it is almost voyeuristic. I hate pinching, unless it’s the tips of my nipples, and my husband used to it just perfectly. Now, he’s exploring more sadistic ways, and it has great results some times and I-Don’t-Like-It others.

Indeed, I love to pinch too. I like to pinch a chick’s butts and nose !

I must admit I got a great little chuckle out of your post. Taking a different route to avoid the bumps is amazing to me. Oh and glad he didn’t decide to fake it in the pictures.

I love this fun post! Love how you mix the serious stuff with the funny stuff and just love the last conversation and the photo. Oh, did I mention I love this post?

I don’t know how he manages to make those pinches hurt with no nails, but he does. Ouch.