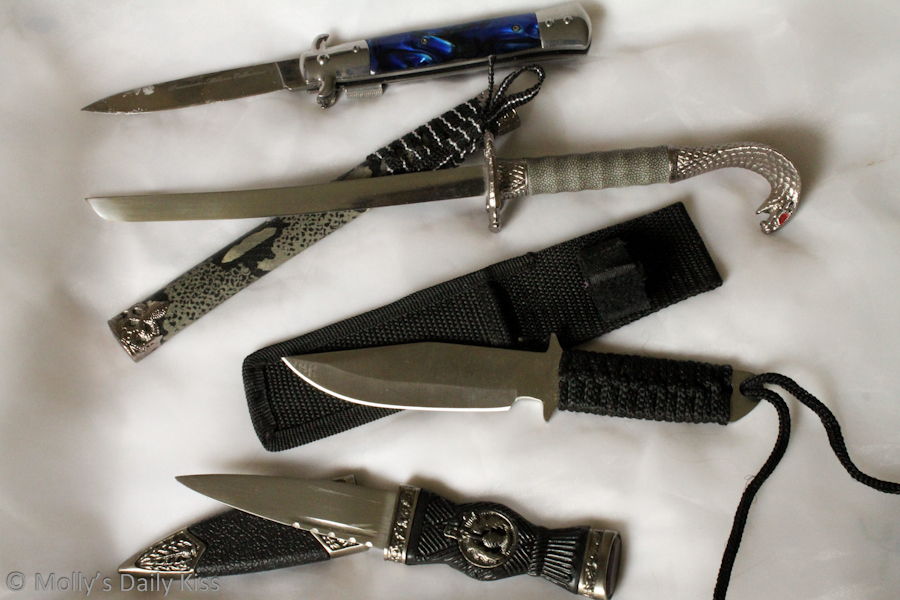 ….As I step through the door you are there, emerging from the shadows behind me. You announce yourself into my world with a gloved hand which smothers my startled cries filling my nostrils with the smell of leather but it is the glint of light on the shiny metal that really grabs my attention and I watch with a fascinated horror as the blade closes in on me before finally disappearing from my vision beneath your hand. The cold sharp sting of the point resting on my neck is like an electric pulse that runs from the tip of the steel straight through my core and into my cunt where my body does what it does best and converts it to a warm sticky desire that slowly starts to leak from me. I wonder if you can smell it….

Knife play is the current topic for Kink of the Week and I am fairly sure this it will come as no surprise to anyone to know that this is most definitely a kink that seriously rings my bell. For many years I had a masturbatory fantasy that despite a few variations pretty much looked like the snippet I have written above with the ‘gloved man’ going on to do a range of despicable evil things to me depending on where my current fantasy ‘du jour’ took my mind. In that fantasy he never cut me but the knife was nearly always present on some form or other.

The first time I saw knife play was at a fetish club we went to and I watched, mesmerised as the knife was used to scratch an intricate pattern over the ‘victims’ back and buttocks in startlingly red welts that in places almost looked like they were drawing blood, almost! Afterwards I asked to see the knives that had been used. They were housed in a special locked box and they were beautiful, a mixture of blades both sizes and styles and handles that ranged from the ornate to the plain and finally sharpness. Some were dull and some were most definitely not. I wanted Sir to look with me but he didn’t, at the time I was disappointed but now when I think back I know why, because if he had looked at the knives he would not have been looking at the really important thing, which was me and my reactions.

Not long after that the first knife purchase was made, the one with the snake handle, and since then he has slowly added to his collection and to the way he uses them on me. Our most recent discovery being that knives and wax play are the perfect kink companions; once the wax has cooled and stuck to the skin the knife can be used to cut it away. It is the closest you can get to feeling like someone is slicing layers of your skin off without them actually doing it in my opinion. When he is done the earlier burn of the wax is recreated as my skin reacts to the pulling, scraping, scratching and abuse of the blade

I think the reasons I love knife play so much are twofold, it is not just the sensations and resulting marks, which I adore; the cold steel against my flesh, the scratching stinging sharpness as it glides over my flesh and the building heat in my skin as angry hot welt appear in its wake. It is also the element of fear, the mind fuck I guess, the knowledge that he could cut me if he wanted too, they way they can be used to cut through my clothes to get at me quickly and that when he says ‘be still’ he fucking well means it because if you get this kink wrong then potentially there could be quite a high price to pay. (this is obviously not exclusive to knife play)

Knives tap into so much of my kink, they are very visual both in their symbolism of power, in the marks they leave on my body and their own crafted beauty, just seeing one in his hand or knowing he has one next to him on the bed makes me wet. I love the power of them, they way they make me feel; small and powerless and for me they have a vicious beauty to them. They are built for harm, their purpose is to hurt and yet in his hands they bring a thrilling pleasure that I can never ever seem to get enough of. 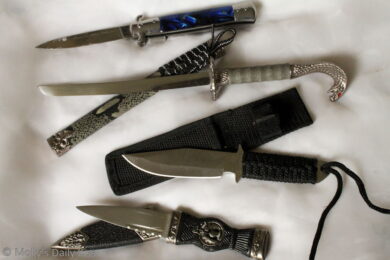 *Some of my current favourite images on my blog are KNIFE related and it seemed appropriate to carry this theme on to include my Sinful Sunday image this week.

Because We Are Human

Wanton Wednesday a week ago…..

You know, I’ve never mixed knife play with wax play! I really need to try that some time, and soon …

I absolutely LOVE the idea of having my clothes cut from me. I don’t think it has to do with the knife though…it’s something else. (I’ll have to ponder it.) 😉

Your first paragraph left me squirming.

I’ve had some similar fantasies, and your description is super hot! Wax/knife play also sounds quite exciting…
xxPenny

Sometimes I read the things you write and it turns me into a pile of mushy stuff.

This is one of those times.

Oh yes, you are speaking a language I know well, at least from a tops point of view. Such beauty in that edged play, as well as trust and adoration

I find knife play fascinating and can’t wait to try, for the reasons you have articulated so beautifully here. Thank you for sharing and inspiring x