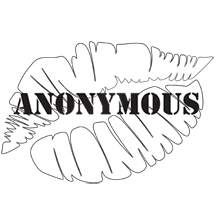 She sent me a private message in Twitter asking if I would publish an anonymous guest post that she wanted to write. I asked her to send it and I would take a look. I read it through a few times, my heart racing and the urge to wrap her up in a warm blanket and try to make things better overwhelming me, then I messaged her back with a yes. She is a another blogger and I suspect many of you probably visit her blog regularly but for now these words of hers will live here. She needed to write them to set them free and now she needs them to be read. Maybe one day she will come here and claim them as hers and maybe not, either way it doesn’t matter. She knows and I know and the rest we shall just leave you to wonder……

Sensuous as the petals of a rose –...

Oddly I can understand where you’re coming from to a point. I have a bit of a stalker, a crazy ex, and it truly is rather scary knowing how much of my life she knows and not knowing what she could do with such knowledge. I’m a blogger as well and also have a sex blog. Both of which she is aware of. It’s frustrating, irritating and a cause for concern. So I do have an idea of what you’re going through.

There are two sides to every story though and I’m cautious to give out advice that could ruin someone else’s life without actually hearing them out.

That being said if you were in fact raped you should file a police report. The best thing to do if an actual crime was committed is to put something down on paper for the police to refer to if things start to escalate.

You also need to look back on this and realize that after breakups you’re in an emotionally weakened state especially if it is someone you cared for. Rebounds are sometimes fun but in this case they’re dangerous. I’d also advise keeping things like personal blogs and kinky blogs that can end careers and things like that to yourself until you really get to know the person or get your head on straight. With a guy like the one you described all you’re doing is giving him more fuel for his fire.

Also if he’s ever commented on your blog, sex blog or anywhere else he would have left behind an IP address. I know for a fact that on Wordpress you can view the IP address and then download a myriad of widgets/plugins to block/ban an IP from viewing the site. It is something for you to research so hopefully you can voice your opinions freely without the crazy guy becoming more infatuated with you.

Again though you need to take a deep look at the situation, I’m not coming down on you, but rape is a serious charge and here in the States it is a life ender for those falsely accused. I will state again that if you were actually raped you need to go to the police station and make your case. You said no and he did it anyway. The police might not be able to make an arrest but having things on paper helps you out in the long run.

I wish you luck,

Ouch :(. I wish I had some good advice for the writer, but I don’t. Just sending some warmth and hugs her way. Hopefully he will gradually fade away into the dark place he comes from. After all, if he tried to cause trouble for you he must know that it would bounce back on him. Please keep your friends close and take care until he fades – form you mind and your life

Dearest girl, I am so very sorry you are going through this situation, I want to gather you up in my arms and protect you. You are the victim of abuse and need support in whatever form you find you can accept it. I hope you find that here. I would like to give advice but it is such a delicate situation and I dot want things made any worse for you. First of all though, you are not to go anywhere on your own. Even a short distance. Your friends, I’m sure, will help you with this. Do not give this man the opportunity to interact with you, that’s what he wants, he wants to be inside your head. Please protect yourself as best you can and know there are people out here like me, who are thinking of you and supporting you. Xxx

I would recommend that you make your blog private – by invitation only – and that would shut him out. Another option is to shut down your blog and set up a new blog address and privately email your followers where to find your new blog.

I basically agree with the others who’ve commented but with these simple effective refinements:

Yes, you can’t contact the authorities to lay charges – it would be his word vs yours. You can however still report him and what he did to university security and/or university student services. Describe him in great detail and provide them with a pic of him if you have one. They then can at least be on the lookout for him. Just consider: you may not be the only one that he has been stalking in the past, currently or maybe in the future. Please be brave and do that much.

Yes, by all means, do NOT travel alone without at least having one (and preferably more) friend(s) with you – at all times, if possible. Better to be safe than sorry when dealing with this villiage idiot.

Finally, as to your sex blog – I say that it’s far better to close it down and start a new private by- invite-only blog where only those whom you know well may join it. Since he knows the url address of your current blog, you knowing his IP email address isn’t sufficient enough to block him out since at some later date he may try to join posing under another (woman’s) email identity, using a different computer and/or a different net isp provider (and thus have a new IP email address unknown to you). Follow all that techie stuff? 🙂

Good luck to you and stay aware and alert – but not afraid! Otherwise he has still won over you, Capiche?

It might make sense to switch to another school, for your own peace of mind and a chance for a fresh start, if that’s possible. Rob had some very good suggestions if you must stay where you are. I would also make sure that your cell phone is always charged and by your side for emergencies.

This happened to me at one time. I felt oddly embarrassed by the whole thing, and it kept me from telling much to my friends or family at the time.

I varied my routes and stayed alert. I didn’t go out much, as I recall — the route I was varying was from the transit stop to my home (and for awhile, to a friend’s place at which I was staying). After awhile, he just stopped.

A friend of mine said, “You can probably blog about everything…but you probably can’t blog about everything right now.” You will be able to write about this, under your own imprimatur, at some time. I wrote about my experience many, many years later, starting with: “When I found myself thinking, “I’m going to get shot to death by a Jewish vegan peace activist from Kentucky for not sleeping with a gay guy,” I knew things had gone too far.”