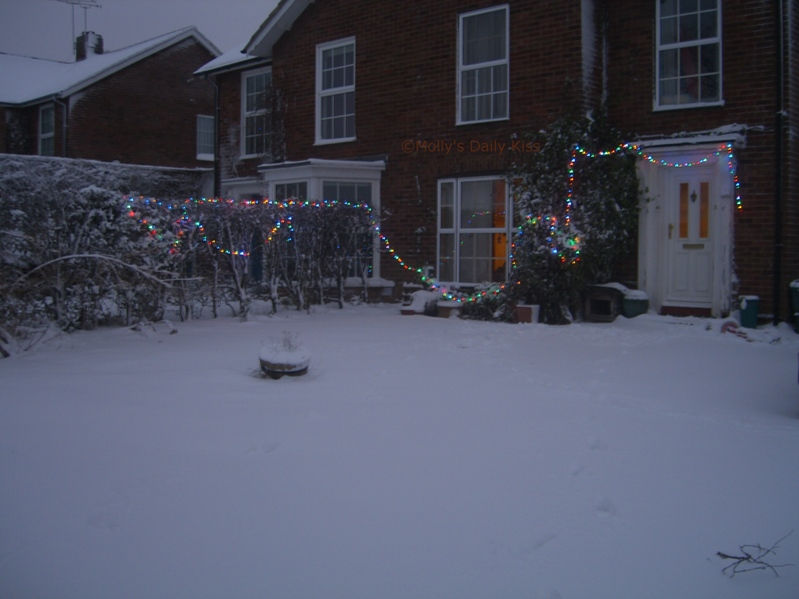 Have you heard the news? It has snowed in the UK! If you have been watching the various media reports of life in the UK over the last few days you will be thinking that we have been exposed to miles high snow fall, however when I look out my door I see about 4 inches. So I go and look at the news reports and shock horror, I see roughly the same thing. Yet the UK is at a standstill, there is gridlock on the roads, the EuroStar service to Paris has a 6 hour delay and the airports are currently masquerading as Bed and Breakfast facilities.

It is pathetic; it makes me ashamed of my country. Where the hell did the fighting spirit go and where the hell are the snow ploughs and gritting trucks? I went out yesterday, to take my son to the Doctors. The Doctor had managed to get to the surgery, and all the staff seemed to have made it to Tesco. They were all standing round in a pretty empty shop, empty of shoppers that is, the shelves were stacked sky high with produce, looking slightly bemused. However, we are being told, that delivery trucks cannot get through, that the postal service is crippled and that if you want to catch a train or plane, then dream on.

BAA who run Heathrow airport have announced that….maybe the 6 million pound investment they made in snow provision equipment might not have been sufficient. No shit! 6 million out of a billion pound profit, that seemed reasonable to them did it? And one has to wonder what they bought with that 6 million, because the pictures I have seen seem to show that they invested in 2 men with brooms, to clear the runways of one of the world’s biggest and busiest airports. (©Steve Parsons/PA) Somehow I suspect someone is sitting on a lovely annual bonus whilst the poor travellers are sitting on the cold floor of Heathrow airport wondering if they will ever get on an airplane again.

Just to put it into perspective, it snowed on Saturday, for about 2 – 3 hrs. Yes it fell fast and quick, but it was not a surprise, it had been forecast for over a week. Today is Monday, it has not snowed in over 48hrs, yet Heathrow is still mainly shut, with 1 runway in operation. What the hell have they been doing for the last 48hrs? Having their annual Christmas party perhaps?

Here is a picture of Frankfurt airport, (©Alex Domanski/Reuters) there are 14+ snow ploughs in the picture and in the back ground, what do I see, OMG, it is an actual plane taking off.  Are they mad? How have they possibly managed that? They have had far more snow than us, surely they should be all in doors shaking their heads at it and making ginger bread?

You will have to excuse my sarcastic tone but I find this situation completely insane. In the UK we seem to have forgotten how to get on with things, the government’s attitude seems to be, stay indoors and only make journeys if you have to, well you know what, people do have to make journeys, they need to go to work, they need to shop, they need to get to the hospital or the doctors and they need to travel to friends and family for Christmas. These are journey that are all essential, necessary and the amount of snow we have had, does not mean that people need to stay at home. How do countries like Russia, Canada and many others that experience far worse weather conditions than this fair? Does the whole of Northern American shut down when they see a flake of snow….I don’t think so. In fact most Americans look at the pictures of the UK and laugh and say… “You call that snow?”

Well yes, we do call it snow, just the same as you do, but unlike you, when we get a bit snow we tend to all stand around looking at with confused looks on our face, before throwing our hands up in the air and then rushing back indoors and making hot chocolate. The problem are caused when this attitude seem to extend to our transport system, and even more so to BAA, an organisation that in my opinion needs a damn good spanking, and then the chairman should be given a broom and shovel and told to “Fucking well get to work” because the ladies at Tesco’s seemed to have managed it, so what’s your excuse?

Ps.. I have just heard on the radio that in order to clear the back log at Heathrow they will allow flights to run right through the night. I think this just goes to prove my point. It is well below freezing here tonight, it was much milder yesterday but no flights took off or landed, but suddenly they have managed to sort themselves out and can now take off and land in sub zero temperature. WHY, has it taken them over 2 days to manage this…….Bet they enjoyed their hot chocolate!

On a slightly lighter note, it does look pretty. Do you like my twinkly light on my bush? LOL 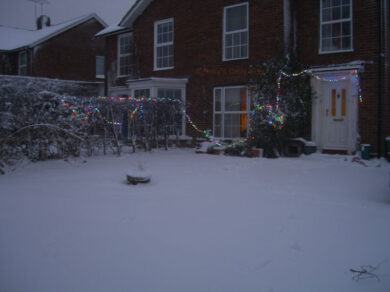 LOL! Poor thing, I hope it clears up soon for you! …and the twinkly light bit crakced me up 😛 your home looks lovely! xoxox

Snow in the UK…wimps ;)…no sympathy at all as I walk through near knee deep snow in my back yard.

I DO LOVE a twinkly bush!! 😉
What happened to “Keep Calm and Carry On” !!??
It doesn’t snow where I live, but we have the same problem with heavy rain (except it rains here ALL THE TIME, you’d think people would get it!). If it’s a torrential downpour, the city just shuts down. When I was (an adult) University student, I would be one of 3 or 4 to show up for classes on rainy days. Maybe I’M the crazy one!

This is for you, Molly!
Iceland! Calling out BA pilots! Lol
http://www.huffingtonpost.com/dorrit-moussaieff/how-iceland-air-kept-flyi_b_801077.html?utm_source=DailyBrief&utm_campaign=122410&utm_medium=email&utm_content=BlogEntry&utm_term=Daily Brief