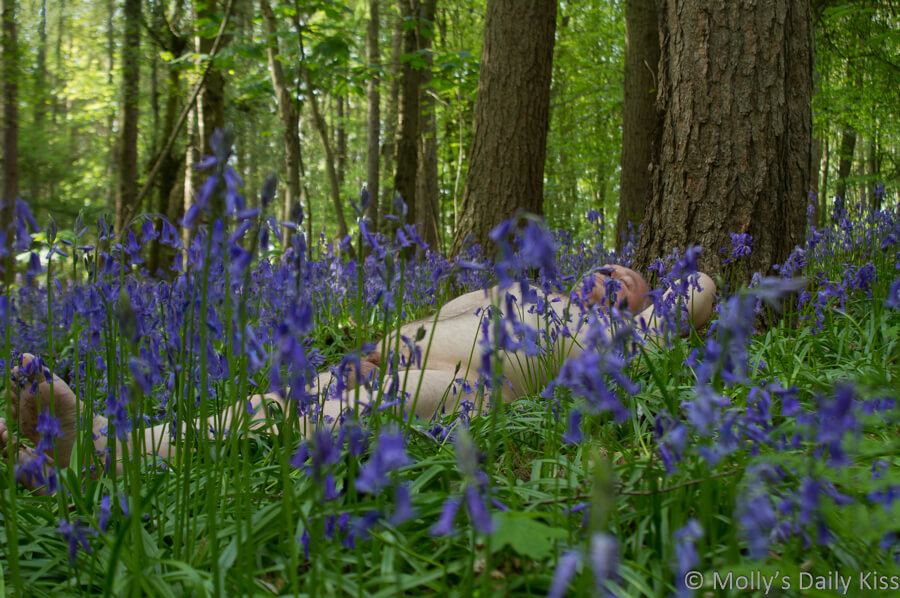 “Rest is not idleness, and to lie sometimes on the grass under trees on a summer’s day, listening to the murmur of the water, or watching the clouds float across the sky, is by no means a waste of time.” ~ John Lubbock

It was not a summer’s day but a sunny spring afternoon and also my birthday. Usually when I go for a walk I go alone, I mainly prefer it that way to be honest but as it was my birthday he agreed to come with me when I said I wanted to go and find bluebells. After taking some self portraits I turned to him and suggested he take off his clothes. He was initially fairly reluctant saying something about no one wanting to see that but I told him that I thought he was wrong about that, did my best pleading eyes and muttered something about a birthday treat for me and he relented.

This is the first time I have ever worked with a nude male model in the outdoors and it is, I think, oddly more challenging to place them in the environment in a way that looks natural and sympathetic to both the subject and the surroundings. After trying a couple of different things neither if which I was happy with it was him who jokingly suggested that maybe he should lay down and wave his legs in the air like I had. The legs in the air bit was not the look I was going for but as soon as he laid down I knew he was onto something.

I shot a variety of images from various angles and with differing depths of field. Some of those will definitely appear here in the future but this week I decided to post one pretty much straight out of the camera. I am really rather proud of this shot.  The only editing I have done to this shot is increase the clarity and contrast ever so slightly. Apart from that, it is perfectly au natural just like him. I love the way he looks so peaceful and relaxed and how his nudity does not feel jarring in the surrounds but quite the opposite, he seems to blend into the setting. I know that he is not that keen on photos of his body but I really adore this image. I think he looks fabulous and sexy and  I keep wishing that once I had finished taking pictures, I had put the camera to one side and sucked him off right there in the midst of all those beautiful bluebells. If I ever get the chance again I shall definitely make sure to rectify that oversight.

You win some you lose some

This is a gorgeous image, natural and peaceful.

Beauty among the flowers, such a peaceful image.

When I read Micheal’s twitter feed on the day of your birthday, I knew your image today was going to him among the bluebells. Micheal, you look so peaceful – as if it were your own natural habitat. Your body is so relaxed looking and of course, Molly has captured you so beautifully. I dunno if you managed to get a couple shot of you both but if so, please share it eventually and if not, rectify that.
Molly, I read your post on your birthday and I am really glad you managed to have such a lovely, peaceful day <3

Thank you. I didn’t take a joint image of us both but as soon as I got home and looked at what I had on my bog screen I realised I had missed a trick. If the weather is OK we might try and return tomorrow otherwise the Bluebells might have to wait till next year but there are other possible locations to explore through the summer

I see what you mean about men in outdoor settings being harder than with a woman. There is something more natural with women in nature, or is that just what we are used to seeing in art over the ages? But, you captured a free spirit in a moment of respite in the woodlands, Molly. I’m sure the ‘model’ received payment when he got back to civilization. And next time, definitely put that camera on a self timer.

What a brilliant job, Molly! So beautiful and peaceful! Cheers to you both! ~C

I can feel myself relaxing just looking at this lovely photo 🙂

A great photo. An image you expect to see a woman in, so the fact that it doesn’t makes you double-take, and then rethink your expectations. He should do that more often.

What a lovely image.

Molly, I love this, all the more because I am walking my dog through the bluebell woods, maybe even the same woods. It makes it easy to picture you in them.

He indeed looks quite peaceful and relax and it IS a beautiful image. I can’t wait to see the rest you have taken 🙂

The image looks and feels so tranquil and serene. His body blending seamlessly with the bluebells.

A lovely natural shot with lots of vibrant fresh colours and he looks so at peace and ease in the frame.
xx

A lovely image; so glad you took advantage of the opportunity. Michael you look great xx

Wow you’ve done a stunning job, such a natural, beautiful photo! I do wish I could find as lovely scenery for my photos. Perhaps I should go on more walks!
Aurora x

This is a very lovely image. I personally love seeing the male fore au natural, and seeing it in the woods makes it even more stunning. Thank you (and your model) for sharing.

I think he is wrong to, I’d love be to see more men in their natural habitat. I think this is wonderful, he looks so serene laying there amongst the bluebells. I’m so glad he did this for you.

This is such a great photo. How relaxed does he look? I had never really thought about the difference between photographing men and women outside. I’ve only photographed two men outside but on both occasions the best shops were them balance up/on trees – EA balanced on the fallen branch and Louche with his boots up the big oak. I’m photographing a third this coming weekend so I wonder where I’ll place this one! Xx

I love the calm, comfortable confidence in Michael’s pose. I love bluebells and I am so glad Exposing40 caught some pictures of me in them. I wish I looked as lovely as Michael does.

Oh, Molly, this took my breath away. Michael is Oberon taking a nap. It’s a magical photo, truly. Everything is just perfect. he looks so peaceful and graceful and ethereal lying there. The bluebells are guarding him, it seems. Wonderful, wonderful photo.

Beautiful image. You are so talented, and the model is gorgeous 😉