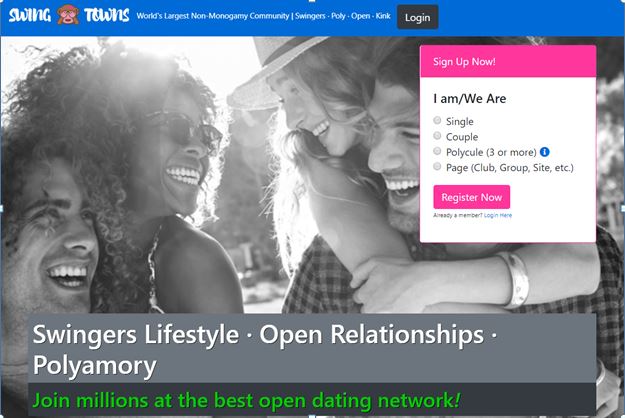 The word “swinging” (for those who don’t know much about it) can conjure up images of men sharing their wives, gang bangs, and group orgies comprised of one or two guys surrounded by women. But those who experience it know that it’s really girls who run the show. In fact, swinging can be a liberating and empowering way of life for women who struggle to own their sexuality in a world bent on slut-shaming anyone with a cooch. You don’t even need a partner to get started and may even find better results if you go it alone as a “unicorn.”

But where exactly do you start? Even top rated dating apps aren’t swinger friendly (or even unicorn friendly) and you might get banned for simply asking around.

The Best Swinger Site for Women

Your typical club or bar isn’t primarily for hooking up, so you’re unlikely to find many rules in place to protect party-goers from sexual harassment. Conversely, swinger clubs and events take every precaution to ensure all physical activity is 100% consensual, so you’ll often hear women saying they feel more comfortable — and far more respected — at a swingers’ club than at most bars. SwingTowns attempts to recreate this environment in a digital space.

While everyone has different needs and desires, our society has taught us to be uncomfortable talking about it. This leaves far too many people stuck with dry sex lives – or worse. That’s why SwingTowns highlights the importance of owning your sexuality in the bedroom (and at the club, etc). Other dating apps might limit you to a short bio and some boring selfies, but SwingTowns users can be more creative with their profiles. This means sexy NSFW photos, longer bios, more options for gender and sexual orientation, and more!

What Real Women Have to Say

Since its debut, plenty of boring imitators have tried and failed to deliver what SwingTowns has been serving up since way back in 2001. They asked some of their users why they think women flock to their community when they have other options these days. According to Gia from Wisconsin, the answer is simple.

“SwingTowns gives me the freedom to express myself sexually in an environment that is safe, reliable, and very fun! I’ve met some great people who have become real friends. I love meeting new people and SwingTowns is the place to do it!”

Tasha from London added, “SwingTowns is an amazing site that honestly lets you BE YOU — the real you — with no judgement. It is BY FAR the best site out there for couples, singles, and anyone else interested in the lifestyle.”

That’s what makes SwingTowns great: their community is real, active, and SEXY AF. It’s a safe space to be exactly who you are and to find exactly what you’re looking for in new partners. Whether you’re looking for young couples, cougars, daddies, or something else, you’ll find just that and more at SwingTowns — and you’ll know exactly where to party with them using SwingTowns’ incredible swinger event database! It’s simply the #1 place to go for anyone active or interested in swinging.

When you’re ready to fulfill your wildest sexual fantasies, you know what to do: sign up for your free membership at SwingTowns.com – the world’s friendliest dating site.