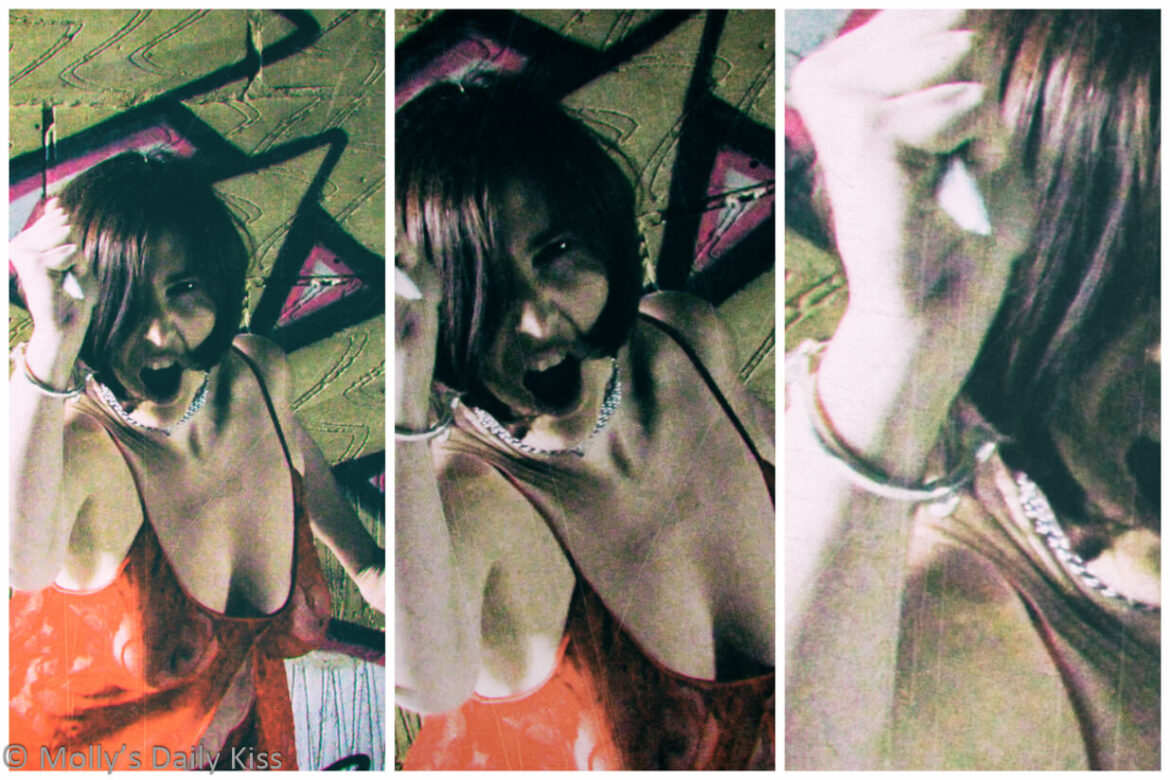 I can be like a firework when it comes to anger. I will explode in a fiery rage that burns bright and fierce and consumes me. I am a slightly (that might be an understatement) sweary person at the best of times but when I am angry that only gets much worse. I will absolutely rage about or at whatever has pissed me the fuck right off but like fireworks it all tends to burn out fairly quickly and whilst it might simmer on beneath the surface for a little while the worst of it will have past. I am mostly utterly unable to stay angry for long. Ask my kids, they know all too well that when I burning with anger it is best to slip away, if possible, or else sit and listen quietly while it erupts out of me knowing that soon it will be done with and we can all move on.

My Mother is a woman who can stay angry for days, sometimes it felt like even years about a thing and it was one of the most challenging parts of our relationship growing up and even into adulthood. She had a tendency to combine her anger with a healthy dose of woe is me, some emotional blackmail and scattering of ‘you are so disappointing’ thrown in for good measure. When I became a parent I vowed to never be that way with my own kids and I hope, and feel fairly confident that, they would never accuse me of those things. They would definitely say that I can get angry but that I always calm down quickly and enter into a conversation that ALWAYS includes talking about why I was angry and acknowledge if my anger was reasonable or not. The most important thing to me is that we get things sorted out so we draw a line under it and move on.

So piss me off and that is how things are likely to go but I would never have described myself as a particularly angry person. Of late though that seems to have changed a bit. I find that I am really quite angry about quite a lot of things. The way the world is at the moment is a huge contributor. Brexit literally makes my blood boil. Listening to stupid white men spout on about stuff that they don’t seem to understand but serves their personal financial position makes me want to castrate them. In fact the world seems to full of fucking idiot white men airing their abhorrent opinions. See told you I was angry and we haven’t even got onto the subject of what a shit stain my ex husband is but is a subject guaranteed to set me on fire.

I didn’t used to be like this. I never fell into that young and angry camp. I didn’t have a mission or a belief that I was passionate about. I was fairly chilled and oddly naive in many ways but as I have aged I have found myself getting more and more passionate about the things I believe in and increasingly angry at how the world we live in is so set up to favour the few rather than the many and that some how very stupid people have been allowed to gain positions of power because basically they have money and the rest of us seem to just have to take a damn a good shafting from this fuckwits because they have gamed the system to work in their favour. Sorry, straying onto my soap box again but really what the actual fucking ever loving fuck.

But my being angry does not end there. It extends into other parts of my life too. It is much harder for me to write about but things have shifted in my world over the last few months in ways that I don’t really understand or can even articulate at the moment but when I examine my feelings about it all the one emotion that seems to bubble up over all the others is anger. I am so fucking angry.

I don’t really know where this post is going to be honest but when I saw the prompt for Wicked Wednesday which is “Tantrum” I thought to myself that I am not having a tantrum but I am fucking livid about shit and so maybe I should just write that instead. Sadly some of it is all a bit cryptic, so this is mainly just me spewing shit onto the screen in an attempt to try and just let some of it go without actually being able to give context to it. I will say this though before you comment asking if I am OK, I am completely safe and I am surprisingly fine.

It has, however, reminded me that I am in fact a hugely resilient person able to hold myself together, take control and get the fuck on with things even when my world is rocked. It was something I learned about myself when I split with my first husband. I had spent so many years believing and being led to believe that I wasn’t particularly capable but when I declared my marriage over, despite being scared, I discovered that actually I was an eminently capable person. It was a wonderful thing to learn about myself. It filled me with confidence in so many ways and recent events have been reminded me of that fact all over again. So despite it being a bit shit and me being really fucking livid I find myself looking in the mirror and seeing a capable, strong and independent woman who is able to weather the storm pretty damn well, looking back at me. I might be fucking furious but I am surprisingly OK with that.

I won’t ask if you are ok for fear of inciting an angry outburst but will say that I admire your passion and verve, even when it is annoying you. You care and that is worth so much more than the passivity that goes on so much of the time. I hope that things calm a little so that your blood isn’t boiling quite as much. missy xx

Thank you. I am actually doing remarkably well

I can feel the rage all the up here and I’m sure the room went up a few degrees reading that! ‘You’ve got to watch the small ones,’ my Mum would say. She could be right!

Wise words by your Mum!

You are SO much more than capable, that is an absolute fact. And I hope that getting to spew anger (minus context) DOES help. I’ve spent too much of my life tamping down anger to even know how to let it out completely. When I get angry, I definitely get more sweary, for sure (that’s usually the main sign to JB and the boys, lol) but I also get sharp and kind of cold. Even my “jokes” (pure sarcasm) are biting and probably a bit cruel. I’m the kind of person who can cut with words but I wish I could let my anger burn brightly and then flame out like you describe. I might not stay angry either, but I don’t forget — which isn’t always good.

Also, the world is giving us a LOT to be angry about right now. I tend towards despair instead of anger in the face of such big problems, though.

Recent events have made it harder to let go of my anger and it rumbles around in my a lot of the time. I have found myself being increasingly cold and sarcastic as a result. Not my best look for sure but sometimes you just gotta let the anger burn

You are awesome in so many ways.

Wishing you well, as ever.

You are a strong and remarkable woman, my friend. Sometimes it’s necessary to contain the anger; other times it needs to be let out. I believe that the process of anger helps to make decisions to improve things in some or other way. Keep on being the strong you, Molly.

Hey Molly – I agree that often it isn’t until shit happens that you realise how strong and what a survivor you can be, if you have it in you. And it is clear to everyone who has met you that you area a mighty fine, strong, resilient, awesome gal! So you carry on and I wish u well x

[…] Molly Moore – Weathering the Storm Molly’s honest and personal piece really touched a nerve with me as I could relate to a great deal of what she shared. Pieces that make me think more deeply about my own responses and reactions always stay with me and this one has done exactly that. Molly has a lot to be angry about, and quite rightly so. I recognised myself in a lot of what Molly expressed, particularly around being sweary, making the effort to intentionally address my own expressions of anger differently to my own children than I experienced and my own tendency to flash and burn if something really gets to me. I wanted to shout ‘me too!’ whilst reading this and I’m grateful for such vulnerable and real posts that remind me of some of my own qualities. Molly has clearly shown that, within difficult times, reflection creates opportunity for positive recognition of strength and resilience. I hope your storm passes soon Molly. […]

I hope that as you give vent to the anger and really talk it out, that there’s peace in there for you. You are super tough but I hope you can find what you need.