A Dress to Die For 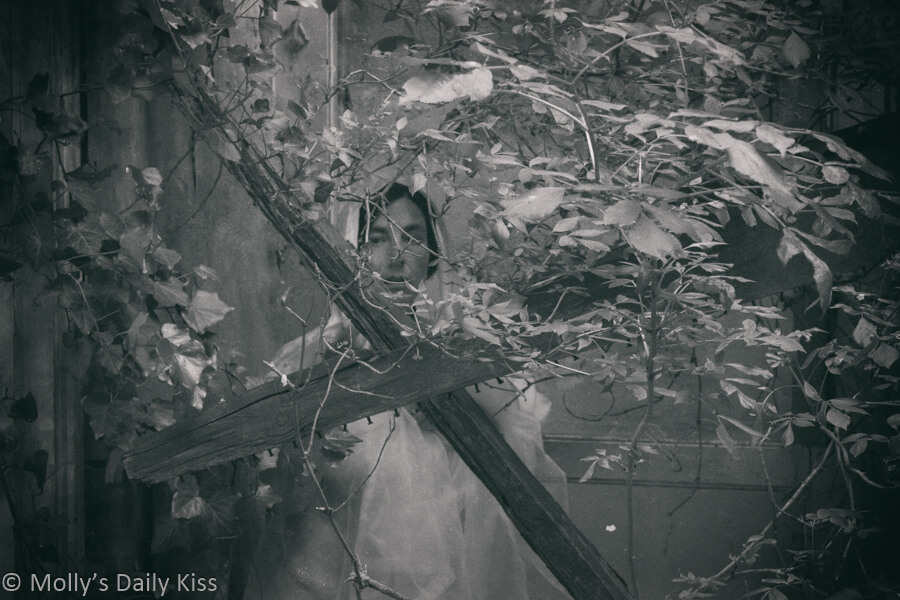 I was 18 when I first came to this house. A rosy-cheeked virgin all dressed in white. Sure I had visited before but visiting is not the same as living in a house.

Your Mother was sweet and kind to me, fussing around showing me where to find things and then promptly snatched up her little suitcase and going off to stay with her sister for a week to ‘give us space’ she said with raised eyebrows and a knowing smile.

That first night you were so tender and loving, slowly and carefully undoing every one of the tiny buttons that ran down the back of my dress, way past where you needed to for it to be removed and when I tried to shrug it off my shoulder you stopped me.

‘Don’t spoil it’ you said

Eventually they were all undone and you stood back and watched as I let the dress fall to the floor where it pooled around me in delicate lacy waves of white.

To my surprise you knelt down at my feet and pulled me down into your arms. You took me there, on the floor, on the dress, first with your fingers, then with your mouth and finally with your cock. There was no blood, I might have only been 17 but I had discovered the pleasures of my own body many years earlier and despite all the silly talk I had heard from other girls my age about such things I had not been put off.

Eventually the cold had driven us to the bed where we had fallen asleep but during the night you must have got up because when I woke you were sleeping next to me but the dress now hung from a hook on the back of the door.

The following night when we went to bed you asked me to put the dress on again. I giggled and frowned

“Really, but I bought this to sleep in” I said holding up a silky red slip I had spent way too much money on

“God no, that is just….” and you pulled this face “Please, the dress” you said, indicating towards the back of the door.

Shrugging my shoulders I took it down off the hanger and stepped into it. This time rather than unbuttoning it you stood behind me and slowly did it back up. Once you were done you stood behind me and kissed the back of my neck and ran up and down my dress clad body before finally guiding me towards the bed, bending me over it and flipping up the dress so my bare bottom was exposed to you. The satin and lace and rustled between our bodies as you fucked me hard and deep from behind.

When your Mother came home she asked me if I wanted to help to box up my dress and put it in the loft. I looked over the breakfast table at you, I think somewhere in my heart I hoped you would nod in approval and it could be packed away but in my gut I knew that wasn’t going to happen.

“No thanks Betsy, I like looking at, I think I might keep it in our room a while longer”

She asked a couple more times over the next 6 months or so but at some point she gave up or forgot about it and it was never mentioned again.

I feel like there must have been a few times that we fucked without the dress being involved but for the life of me I can’t remember them. In fact even after the baby was born and my breast where too big to fit into the dress you would still ask me to pretend put it on, or place it on the bed beneath us while you filled my cunt with your hot seed.

I don’t remember the moment when I started hating the dress. One day it was just there twisted up tight in my gut. At first I tried to ignore it but it didn’t work and gradually the resentment and hatred grew and every time you asked me to put it on it got worse and worse. I just wanted you to see me; I wanted you to look at my body, to touch my body, to want me just as me, naked and willing. You however only seemed to want me in the dress.

The first time I said no you look horrified

Maybe I should have talked to you about it more, maybe you should have talked to me about it more but that was the beginning of everything changing between us. The rage grew slowly and steadily. We argued, not about the dress but about silly things, things that didn’t really matter until the day I walked into the bedroom and you were holding the dress up against your body and your trousers where round your ankles and your hard cock was throbbing in your hand.

Of course when you called the police and told them you had come home and found me at the bottom of the stairs they believed you. They even believed you when you told them that you thought I had tripped on the wedding dress that I liked to wear round the house sometimes. Of course they believed you, why wouldn’t they? After all it is not like they were going to think that you put the dress on me after you pushed me down the stairs or that you it made you hard while you were doing it and who was going to notice the little white stains that dotted the bodice, after all, it was all white.

It took me ages to decide if you buried me in the dress as a punishment to me or to help with your guilt over the whole thing. Whatever the reason it didn’t work and you died a terrified man alone in your bed with the horrific images of my ghost clouding your mind.

Every Breath You Take

His turn in the shower

Holy darkness, Batman! I made myself not peek at the picture until I read the story. Well done.

This is a beautiful piece of writing… disturbing, dark, beautiful!

This is a fascinating depiction of a fatalistic fetish. Very creative!

Beautifully gothic – and the image is so haunting.

So creepy and grand with creativity

What a horrifying twist at the very end. I love the undertone of darkness that just grows and grows.

Oh wow that was amazing! I actually read the last paragraph first and that’s what made me want to read the whole story and I wasn’t disappointed. Spooky and sexy. Thank you!

Wow! This was amazing. I didn’t expect the ending!