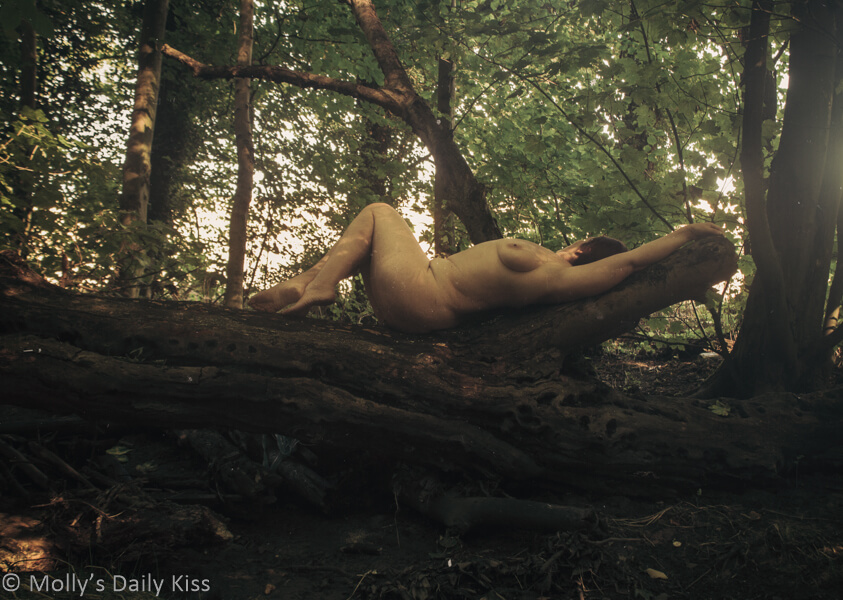 I am fairly sure that when I post the prompt for Sinful Sunday everyone assumes that I pick things that I already have images or at least an idea for. After all only a crazy person would make it hard for themselves. All I am going to say is that people who assume that are (because she is a crazylady ~DS) wrong.

So this month the prompt was to pick an image to reshoot. Now I have a lot of images and so narrowing it down to some potentials took me a good few hours let alone making a final decision. In the end I decided to pick one of the images from the very first outdoor self-portrait shoot I ever did.

This was taken back in June 2011 when Michael was still living in the USA. The story of this image, along with the others in the series, and what I learned that day can be found on If you go down to the woods today. It was taken on my old little point and shoot camera. Back then I didn’t have a remote control trigger either so this shot involved setting up the camera, putting the 10 second timer on and then legging it into position. It definitely made the whole thing that much more of a work out but also often meant I came home covered in scratches and bruises. I have a learned a great deal since that day and the kit I use has changed as well. No more the point and shoot, instead I am using a Canon 7d with a Cam ranger remote control which allows me to use my phone as a remote control screen. I still come home covered in dirt though and sometimes there are scratches and bruises but that usually means I have fallen off something.

I thought that returning to this spot after such a long period of time would be really interesting but I really had not appreciated just how much time had changed the environment and until I got home and look through the images I had taken and compared them to this one. Time has absolutely transformed things.

Where the canopy was once open, the fallen tree having left space above for light to get through and the grass beneath to grow it is not thick and dark, the grass is all gone to replaced by a dark muddy woodland floor. The tree itself is rotting away. The branch that was in the original picture disappearing out of the shot has broken off leaving only a short stump behind and the whole thing has sunk right down. The trees around it have visibly aged and thickened up blocking out a great deal more of the light. Where once it looked like a sunny glade in which to sit and enjoy the surroundings it now looks dark and dank.

The time of year has changed too. In June the leaves are that bright fresh green that signifies early summer. By the middle of September they have lost their freshness and the Autumn yellows and oranges are starting to creep in.

The woman has also changed too. Where once she was cautious about being out in the woods on her own, her confidence has grown with experience and the little slip has been discarded in favour of, well nothing. Her confidence surrounding her body has also changed too. Even though she is slightly bigger than she was back then she is far more comfortable being naked than she ever was. Just like the tree she is laying on, time changes everything…

Come together, right now, over me

Your 7D takes a nice pic.. actually, I can’t use ‘pic’ with a 7D… photograph. What a sight to see in the woods!

We can certainly identify with the difference between hitting a timer and scrambling into position versus the convenience of a remote! Both photos are gorgeous and really show off your eye for composition and framing. We are in awe! ~C

Thank you guys. Having the remote screen on my phone has been an amazing thing. It means I can play with a shallower depth of field too

ooo that’s a good one! It reminds me of like a graceful leopard lounging in the tree after stalking her prey…

I’ve always wondered about these prompts… so how DO you come up with them?

I’m trying to learn from your photos and experience. Right now I’m trying to find a remote for my camera and not having much luck. I live in the sticks so wifi doesn’t always work out here to use my phone either. I’m sure there must be a solution for this.

If you want some advice please do send me an email. The thing I use is called a Camranger which basically creates a wifi hotspot between your camera and phone but it will depend on what camera you have as to if it will work. What camera do you have?

And I missed a part of your questions. How do I come up with the prompts? The answer is a variety of different things. Sometimes I see work others have done and think that would make a great idea for a prompt, sometimes I get them from other photography sites that I go to which run themes or prompts and sometimes, but this is not often, I do get them from images I have done.

I like to challenge myself and so often pick things that I know will push me to do something new, or different, thus making it harder on myself but also more rewarding

Both images are beautiful, although in different ways.
Also, I had forgotten the amusing story behind the earlier one.

This is so fabulous. I love the story in the first post about you being all nervous going out/wearing wrong shoes etc. That really made me chuckle. I liked the first photo but the new one is stunning. Definitely better being naked in the woods. I love how you point out the detail of the changing forest. And your relationship with your body. All of it’s just fabulous! XX

Thank you and of course, never take pictures in water when you have a Labrador with you, unless you want the dog to be part of the images that is!

I remember the first image and the story around it, and also how I admired and still admire you for going out on your own to take photos. I love the last paragraph: it’s true, time changes everything.
Both images are gorgeous!

PS: And, reading this post made me realize I should start using my camera with remote more, since I too can use my phone for that.

I really do highly recommend a remote, I couldn’t work without one to be honest and I still to this day take the vast majority of my pictures whilst out on my own

Thank you. I do have an excellent sense of direction and whole collection of proper maps to help me too because Google maps knows nothing about woodlands

Wow Molly – this is utterly fascinating – to see the evolution of not only your photos and surroundings but also the woman – stunning!
X x

A great reshoot pair of images and love the narrative. Always good to hear about increased confidence over time as a few have mentioned with this months theme. xx

I love this, a great shot and great confidence, inspiring thank you

I kept thinking as I was reading your words about how that decay in the woods is making way for new life; how for every branch that falls off a tree or leaf that withers, it makes way for new growth and sometimes assists in that growth. Like the tree, you have discarded something (your slip) to make way for something else (your confidence) to grow! Both beautiful shots, Molly. I like the new photo – the darkness fits the season, and I can almost smell the earthy scent around you.

Yes, once again a beautiful image! Earthy, pagan, with you both reflecting on time and being timeless.

Isn’t it amazing how our environment and us, change over what is a fairly short time.

I really admire your courage, whilst I happily(ish) get naked in the woods, I have him with me which helps a great deal. I have so much admiration that you do yours, mostly, alone.

I am more than happy in the woods on my own. The times I tend to ask for company is actually in more populated areas as I need a look out

Molly, this is wonderful! The original image is beautiful, but the second image just knocks my socks off. I love how you describe how you’ve changed and how the forest has changed. And we can see the tree lower and the forest darker and the trunks bigger. And we can see how much more comfortable you are in front of the camera and in taking the photo. Like F dot Leonora said, I love hearing about your process. I learn a little bit more every time.

Stirring words and images. Time does change everything and your comfort in who you are is evident.