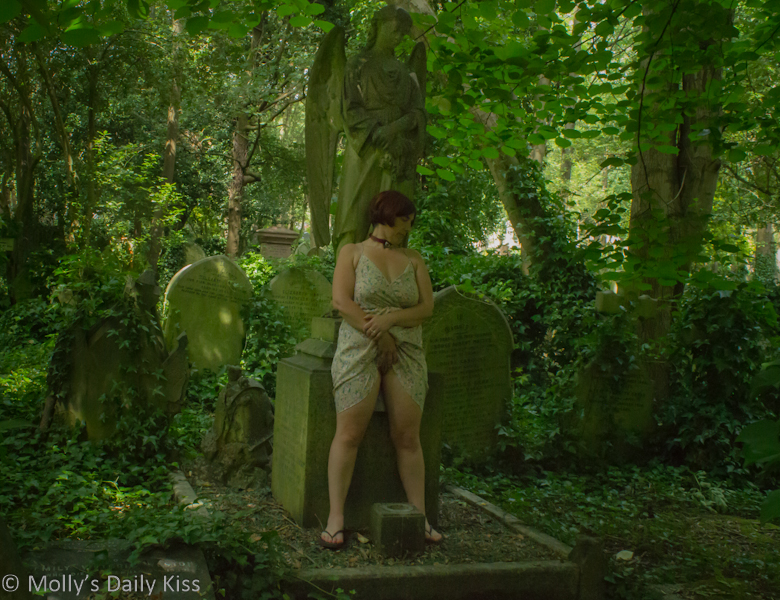 I really should have posted this Scavenger hunt for Halloween, the location seem fitting, but as the saying goes, better late than never.

I have a bit of a thing for graveyards. They are fascinating places full of human stories and social history as well as reflecting fashions and trends of various different eras in history, most notably the Victorians who really had a macabre Gothic relationship with death and the afterlife. To the Victorians death was just another opportunity to display your wealth and standing within the community and as a result they built cemeteries on a fairly grand scale. Highgate cemetery in north London being just one such example which is full of amazing Victorian mausoleum, crypts and family tombs. The whole place is a spooky Gothic Victorian delight but my interest doesn’t end there.

Maybe it is the react to death or maybe it is just that the ‘darkness’ of these places taps into my kink but cemeteries and graveyards make me want to fuck. I have long-held the desire to be utterly ravaged in such a place, preferably at dusk, when the light hovers in that oh so atmospheric way between day and night, when the shadows are long and deep and everything things just that little bit more creepy than normal. The thought of cruel hands defiling my body while the dead play silent witness to our deviance fills me with an aggressive lust.

So far this activity still remains on the ‘to-do’ list but my desires have, I know, not gone unnoticed and so I am fairly sure that it is purely the lack of an appropriate time, place and also weather that has so far stood prevented it from happening.

However despite that little fantasy not, as yet, being experienced that has not stopped from me indulging in other unbecoming activities in various locations. One of the reasons I have not posted this Scavenger hunt location before is that I have been unable to settle on the favourite one but then I realised why pick a favourite, when you can actually just show them all. Having said that these are not all the graveyard pictures I have ever taken, we just don’t have time for that but these are my two favourites to date

Starting with some shots I took about 2 years ago when we visited Edinburgh taken in Old Calton Cemetery which is home to a whole host of Scottish historical figures and characters and is full of the most amazing variety of graves dating back to 1718. 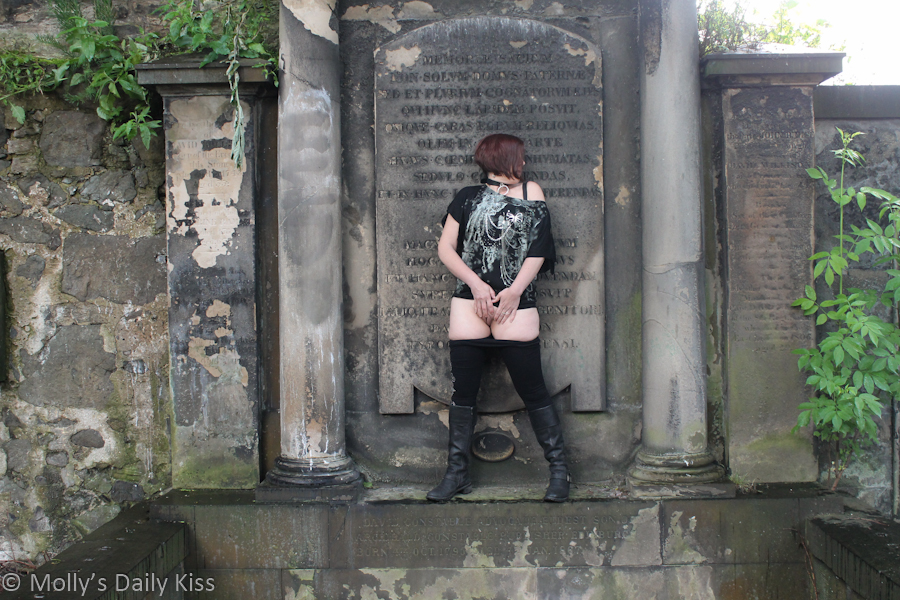 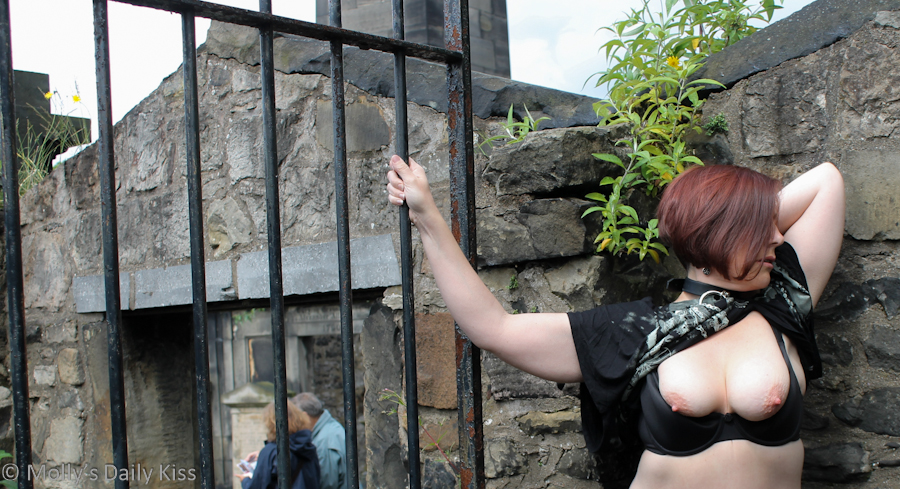 These next ones were taken this summer in the aforementioned, and truly worth a visit, Highgate Cemetery. I can not recommend a trip to this place enough. It is the final resting place of a whole host of famous names such a Douglas Adams, Karl Marx and Michael Faraday but for me it is the older lesser known graves that lay in various states of decay that just seems so full of stories.

I think this one should be called mimicking angels

But it was this simple grave with no name just a rather profound sentiment…. 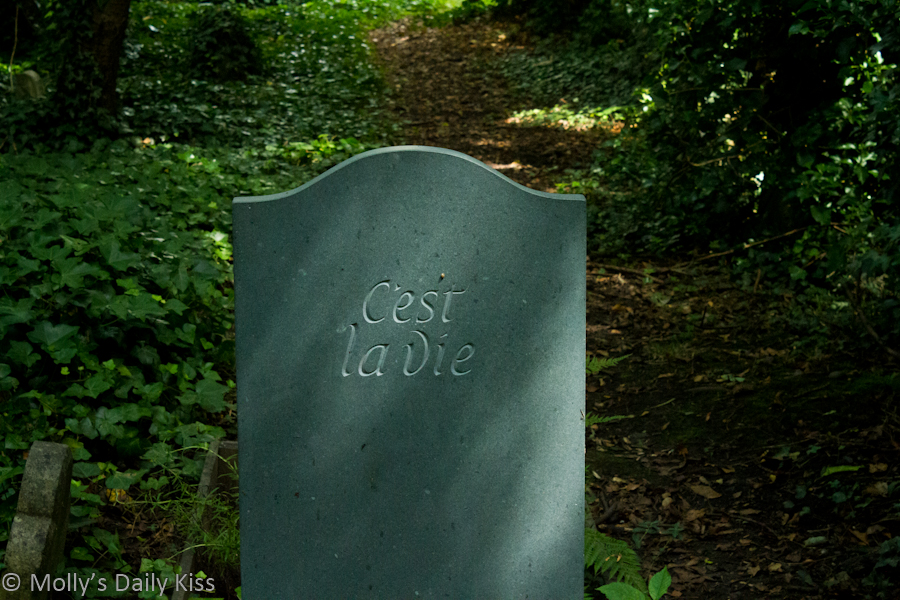 That is probably my favourite graveyard Scavenger hunt picture to date…. 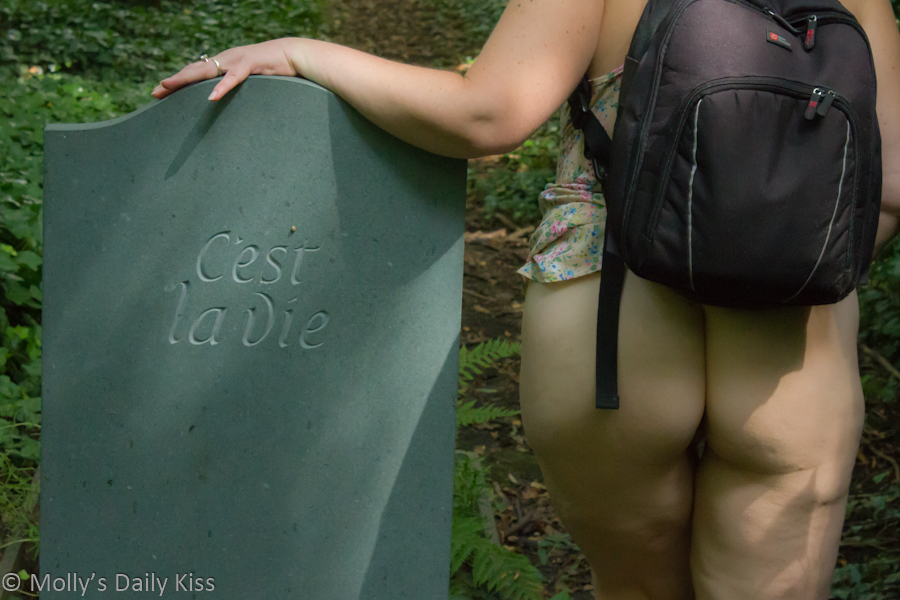 Although I very much doubt it will be my last as my love of these places will, I am sure, continue to draw me and my camera back again and again.

Cemetery/Graveyard is my 61st Scavenger hunt location. You can find a complete list of location so far on my Scavenger Hunt page

I love this photos! Especially the one of you up against the wall and the couple in the back ground. Very naughty x

I have a thing for graveyards too. Unfortunately, in the States, I can’t get that old history that you can, but I love to explore and see the stories that unfold. Statues have always been a thing for me.
The middle photo with the greenery and you underneath the angel is simply stunning!

These are fabulous. The last photo is definitely my favorite. I just love your bum 😉

We were planning a cemetery scavenger hunt at the end of summer, but then I decided it was a better plan to fall… plans ruined. But, we will get back to it and instead of a summer scavenger hunt, we will do a winter one 🙂

Keeping the spirits company and in good mood ! Well done !

What a fantastic setting! I love graveyards too…but I think I might yours better than any I have here. As long as you’re in it like that. 😉

Those are awesome pics. I’ve always wanted to take pictures in the kinds of places you are brave enough to take yours. I think I’m working up my courage more and more. Thank you

Love the second and third ones, so sensual.

Molly, you are hot enough to wake the dead and set them to dancing! Amazing photos, and I’ve updated the SH pages with it.

I’m not very brave with the outdoor photos, but you are and these are awesome! I particularly like the 2nd and the 3rd – something about your attidude, although the lighting in the one with the stone angel is very ethereal. Thanks for sharing.

[…] this is a borrowed kink. If not for the wonderful Molly Moore, I’d never have considered sex in graveyards. I could think of a hundred filthy stories to write for the risky sex Kink of the Week prompt, but […]