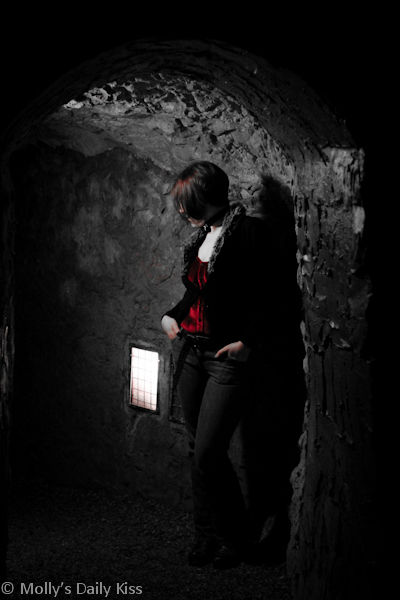 We are indulging in a child free week at present as the beasties are off on holiday with their Dad. We have been using this opportunity to get out and about and on Sunday headed to a new play club down in Surrey and then spent Monday exploring the surrounding area before paying a visit to a local munch and that was just Sunday/Monday.

On Monday we decided to pay a visit to The Hell Fire Caves in West Wycombe. They have been on my list of ‘places to visit’ since before Sir moved to the UK but until now we have never quite made it there so when we realised that it was only about 15 minutes from where we were we decided to check it out.

The caves were constructed for Sir Francis Datchwood in the 1750’s and become the secret meeting place of the notorious gentlemen’s club; The Hell Fire Club. It is believed the caves were used to host evenings with lady guests who all wore masks to the events and were to be of “cheerful, lively disposition to improve the general hilarity”. No-one knows exactly what took place at The Hell Fire club but the list of members is peppered with the names of many powerful and wealthy men of the time. The caves remain to this day largely unchanged from those times and there are many stories and mysteries that surround the place including a number of supposed residence ghosts that haunt the tunnels.

We didn’t go there intending to get a Scavenger Hunt but it turned out that the rabbit warren of tunnels and little alcoves combined with the fact that because it was a Monday afternoon there was only one other family in the tunnels with us meant it was just too a good an opportunity to pass up. Oh and the whole place echo’s beautifully so as long as you are completely still you can hear anyone coming ages before they actually appear in the same section of the tunnel as you. 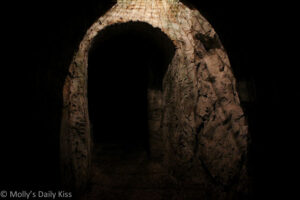 You can’t really see from the images but the walls are damp and in places water runs down them or they are covered with moss. It’s not cold though so much as damp and strangely eerie and as you make your way deeper into the tunnels they slope steeply downwards into the earth. The first shot we got was OK but the lighting in that part of the caves was so dim that we decided to try again. 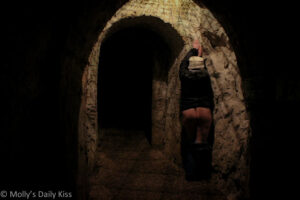 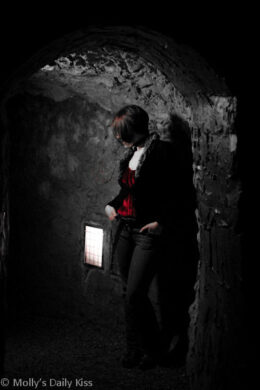 Before plying my trade in a manner that I suspect the original members of The Hell Fire Club would greatly approve of. 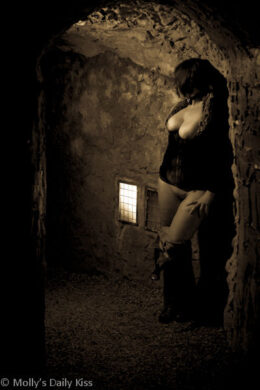 And so I have adding ‘Caves’ to my list of already completed Scavenger Hunt locations and if I ever win the lottery I am so going to hire this place and have the most lavish and sexy fetish/kinky party ever!

I Need To See

I am your fairy tale

Oh those are gorgeous photos

Stunning photos. I love the muted tones except the colors on your person. Just beautiful I would have been hard pressed to stop at taking photos.

Absolutely stunning pictures and what a setting.

OMG . . . we’ve just returned from three wonderful child-free days IN Buckinghamshire ourselves not far from High Wycombe (not that we got out much from the hotel! . . . but might have been tempted had we known about the Hell Fire Caves! PMSL ) Wonderful pics. We’ll have to go back now!

Not a million miles from where I grew up, but I’ve never heard of the West Wycombe Caves!

Lovely pictures; looked like you had a good time.

Beautiful pictures and I love this location. Going to have to visit here one day myself 🙂

Woo-hoo!! Well done! the pics are gorgeous even with the low-light factor. And I would love to be part of that kinky get-together 🙂

You are one sexy bitch…love those last two pics…especially the last.

Should that party ever happen…count me in! Great pics.

You look amazing – and that would be a rocking party!

Sorry I took so long to get to these. I have updated the SH pages now 🙂

these images are just stunning