When I saw the prompt for Wicked Wednesday this week (using semen in recipes) I immediately thought of this post I wrote a couple of years ago. Rather than re-posting it I contacted Rebel and asked her if she would be OK with me linking it in as is as long as I wrote an introductory paragraph to explain. Because she is fabulous she said yes and so here it is. I warn you though, you will either love it or hate it…. although maybe that is part of the whole appeal of it for me.

He has been talking about doing this for a long time now. Whenever he mentioned it I used to get worried and fidgety mainly because the idea made me feel all hot and bothered but also because a part of my brain was  screaming out at me that this was actually really rather disgusting. So I would listen to him with a mixture of horror and lust and wait for the day when his words would stop being just words and become actions. He talks about a lot of things but I have learned that it will eventually happen and not to be fooled by what seems like a lot of waiting. 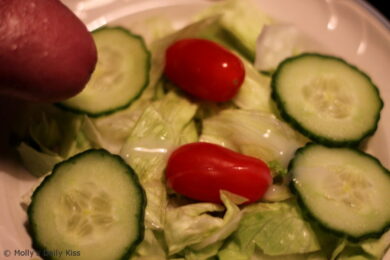 I am so glad I grabbed the camera at this point. I just had to remember this moment. I was about to sit down and eat a plate of salad coated in his cum. I could feel my nipples harden and my pussy twitch at the same moment my brain was telling me this was too much but if there is one thing I have come to learn over the last few years it is to trust in my body. So, with what I now realise, was a rather filthy smirk on my lips I sat down and ate ever single morsel of it, while he watched, and even licked my lips afterwards.

Despite my previous apprehension the whole process was hot as hell. It seriously turned me on from the moment he started to open his fly to my plate being empty. Afterward we enjoyed the beef and although my tummy was very satisfied the same could not be said for the aching throb of need between my thighs. Although that was eventually dealt with later…..

I am… cock sucking

Hehe, so deliciously filthy. Is it wrong that the slight disgust I feel actually turns me on? You are such a good slut Miss Molly.

Not at all… I think that was exactly the same as my fisrt response.

Hehe, I suspected as much. Happy final HNT by the way! What a way to go out!

Wow! Super hot!! So pleased you shared, not I want a salty margarita YSL style 🙂

Brilliant!
I don’t imagine this ever happening in my lifetime, but I definitely lived vicariously through your account of it! 🙂

I have learnt never say never, who knows what our future hold for us.

I so admire your pluck in doing it and posting it:) x

Thank you. It felt very natural really and VERY hot.

My first reaction was the same as yours. Squirmy discomfort. Which turns out to be a MAJOR turnon. The things these men do to us …
And thank god they do:-)

This is definitely one of the most unique final HNT posts we’ve seen today! Very exciting!

A very interesting post and great description. Not something that would turn my crank personally, but I enjoy the naughty of it.

Well, it would certainly be a low-cal dressing?

This is fantastic! I’ve had it threatened before and I was quite mixed on it too. Love your little smile!

Said it before, say it again, you are my idol! I could never do that!

Wow. That is such a filthy, hot thing to do. Sometimes us subs get so turned on by doing the filthiest of things, especially if there’s a camera handy to record it.
A great read, thank you.
Sev xx

I’ve seen this post for the first time months ago and it made me squirm, but at the same time the idea appealed to me. The pure dominance in his act…

Hmm, hot. We both like it hot and fresh. It seems to cool and thicken quickly in the open air and we don’t like it anything like as much then. I guess we’re in the ‘Hot and fresh’ camp.

This is GREAT! a part of me went “eww” then another part got a slight tingle looking at the photos of you eating your delicious looking salad.
Thanks for re-sharing.

And the photos are awesome!

I read some erotica once which had a restaurant scene where the “domme” provided her sub with his “dressing.” It read hot!

Did it ever happen again?!

She squirts and has told me after I ate a salad that she squirted in it. and since she didn’t squirt just quite enough, she decided to also add some of her piss into my salad.

We had messed around with water sports before, me on her clit and it drove her wild.
After she told me that not only did she squirt in my salad but she pissed in it.

I was so turned on I took her across the table. and fucked her harder than I have ever fucked her before….She must have had over ten orgasms…Now each time we do prepare a meal for each other without the other one around we both wonder what actually is in our food…

We tell each other that something is in it. and we just have the most fantastic sex ever.