BoobdayEvery Damn Day in June 2022Kink Of The Week 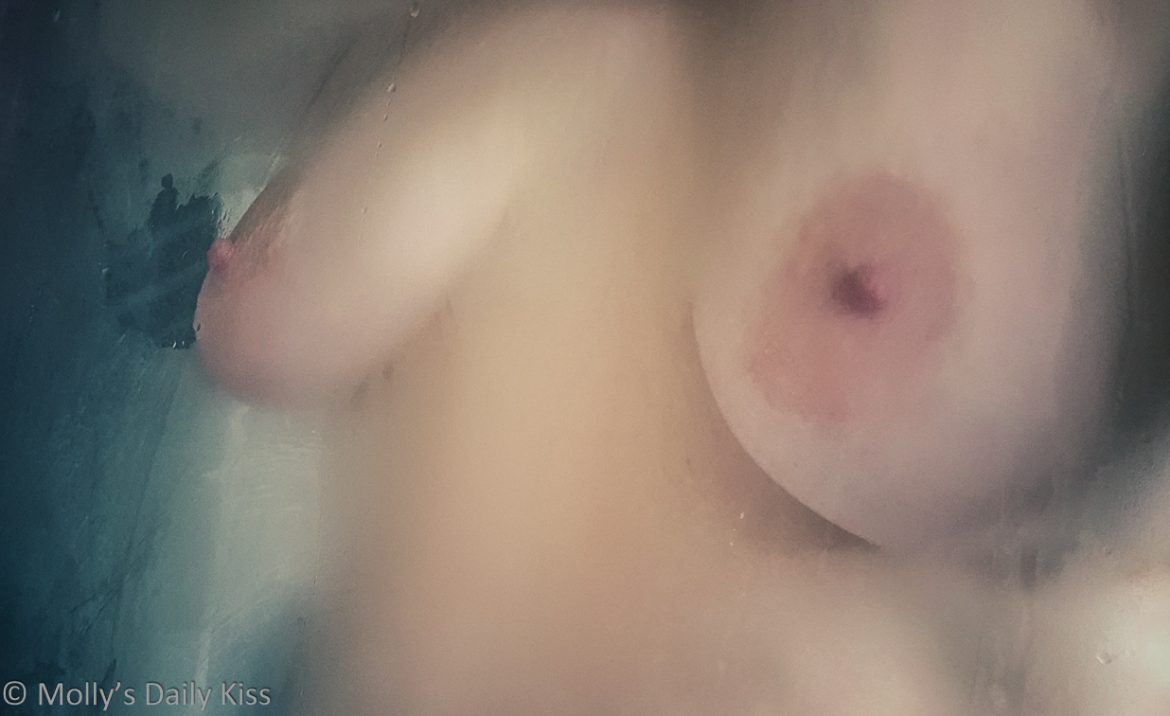 “Breasts are a scandal because they shatter the border between motherhood and sexuality.”
~ Iris Marion Young

I am fairly sure I have used this quote before. If not here on my blog then definitely on my 365 project on Twitter but it is absolutely spot on. Breasts are a scandal because they confuse men. The male gaze has sexualised the female body as a whole, but breasts in particular. They have confused the sexual aspect of breasts, the nipple, with the whole breast which is why male nipples are seen as OK and women’s nipples are not. Many man have nipples that when touched or stimulated evoke a sexual response just as many women have nipples that are not particularly responsive in that way but men have sexualised breasts and they are deemed the offending article, ignoring the reality that they chests are just the same just without the tissue for breast feeding. The result, a world where men are free to expose most of their body with little or no consequence and one where women are most definitely not.

My breasts and bras

I don’t really remember when they became a thing in my life. I vaguely remember going bra shopping with my Mum and I think I might have been about 12 or 13. I do remember the grey hair lady, with her tape measure worn around her neck, measuring me and tutting. To this day I still have no idea what she deemed wrong about me and my shape but they way she said, ‘Let me go and see if I can find something’ definitely added to impression that I was disappointing or not normal in some way. To a young shy girl who was living through the most intense bullying at school for somehow being different, again in ways I didn’t truly understand, it was another message that I was weird and unattractive. It also put me off the whole ‘being measured’ experience for life. Just the thought of going into the changing room and asking for a fitting makes my chest tighten with anxiety.

I have tried a couple more times since then but the only successful one I have ever had where I felt both treated with respect and understanding and most importantly of all got a measurement that was accurate was the virtual bra fitting with Curvy Kate that I did during the pandemic. I admit I was very dubious about it before I did it. After all how was someone going to look at me on video and know my breast size but turns out they can. I had my appointment with Kate and she was just wonderful. I am not being paid by them (if only) this is totally from my own experience but I can’t recommend their virtual bra fitting enough. No more guessing your bra size, following the various fitting guides you find online. Don’t know about you but I found that every single one I did told me I was a different size and none of them told me I was the size that Kate did and she was absolutely spot on. Even though I didn’t believe her at first.

There was no way I was a 34 or even she said try a 32 and there was absolutely no way I need a FF or G cup…… But I followed her advice, ordered the couple of bras she suggested and well, it changed me bra life. Over the last year or so I have slowly got rid of all my old bras and I mean all of them and replaced them with my new size and the result is, well I can’t remember bras ever being this comfortable before or them making me look this good before. My tits were always bulging out of the cups and the straps where always digging into my shoulders and… well anyone who wears a bra will know what I mean. If your bras feel wrong, maybe that is because they are and what I had been doing, constantly sizing up the chest measurement rather than the cup size was the biggest problem, but when something doesn’t fit you tend to think you need a bigger size, which I did, just not in the band size.

*whips off bra. (no matter how comfortable a bra taking them off is still pretty much the best thing about them.) My favourite item of clothes in the whole world are summer dresses that don’t require a bra. That is the pinnacle of clothes in my opinion.

Anyway, enough about that let’s get to the touching part

Over the years how and if I like my breasts and nipples being played with has changed. In fact even week to week it can change. When I was younger, before I had my children my nipples were fairly flat and not particularly sensitive. It kind of felt nice if someone touched them or sucked them but mostly it seemed to be something they got pleasure out of doing as opposed to be getting pleasure out of them doing it.

Then I had a baby which led to breast feeding and things where never the same again, and not necessarily in a bad way. Breast feeding changes your breasts. There is no two ways about it. They get bigger, much bigger usually but the result is that eventually when you give up breast feeding they actually get smaller again and effects of that on the skin is often evident. I am not complaining mind you, I love my breasts. I love the way they look. I was one of the lucky people who loved breast feeding and found it easy. I wouldn’t swap that for perfect unblemished tits even if you offered me money.

But it also changed them in good ways. My nipples changed shape and were no longer flat, and no longer unresponsive. It was like breast feeding awoke the nerve endings and their pathway to my vagina. I can remember feeding my son and feeling my womb contracting, it is meant to do that by the way, but somehow that seemed to help my body make that connection and suddenly having my nipples played with became a lot more interesting.

Of course like so many things it also depends, there are times of the month where that is less so the case and other times when they are too tender and sore. The HRT that I am currently on has made them more sensitive and tender, not a bad thing mind you, I find that ache rather enjoyable and it makes me want to reach inside my bra and give them a little attention to ease the ache… or maybe just transfer it to other part of my body.

It is why I like putting pegs on them. I have tried lots of different nipple clamps over the years and they are either far too aggressive or don’t do anything at all but clothes pegs (clothes pins for the Murricans) seem to offer just the right amount of pinch for me.

Both yours and mine. Small, big, and all the ones in-between. It one of the reasons I was so happy to take over Boobday from Hyacinth when she decided to take her blogging break. Celebrating boobs particularly in a world where they are increasingly censored and demonised is important. Being able to share your breasts stories, both fictional but our lived experiences is important too. Like so much of the female body the conversation around them is nearly always sexual or about the cosmetics of them (how can you keep them perky, wear this bra to make them look better, use this patches to mask your nipples (what?) As with so many things we are taught they are a problem and here is things to buy to make them better. Oddly you never hear the same message about testicles do you? So yeah, boobs. I have them, I love them, I celebrate mine and I will joyfully celebrate yours with you too.

Free the nipple, breasts hurt no one, unlike guns.

Prick me the right way

Interesting read and I’m perfectly fine with seeing a quote again and even more so with seeing your breasts again! It’s odd that women have such a size esteem issue. For men It’s understandable but breasts are great no matter the size and shape to me.