A cascade of hair 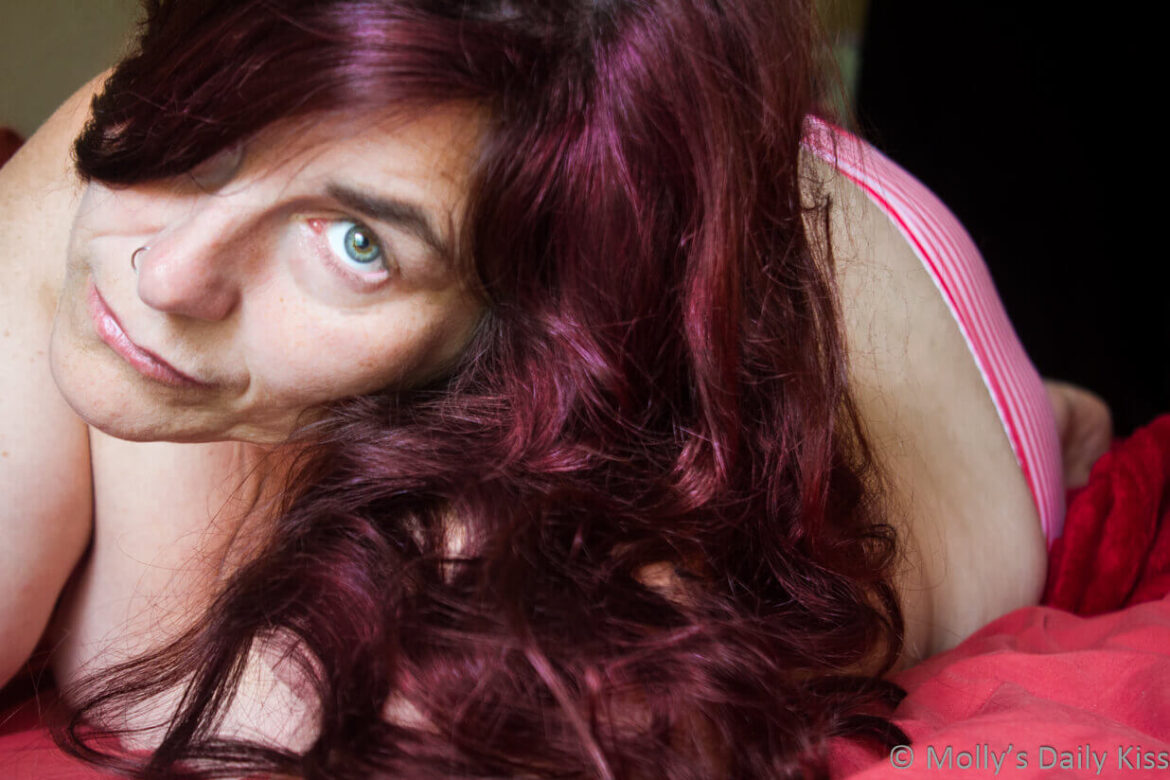 “People say women shouldn’t have long hair over a certain age, but I’ve never done what everyone says.”
~ Jane Seymour

It has taken roughly two years to get my hair from super short to what could be described as a cascade of hair. I first cut my hair short when I got pregnant with my son, then I grew it again and then when my daughter was born I cut it again. Over the years it gradually when from a shoulder length bob to chiseled bob cut that followed the line of the chin and was shaved into the nape of my neck. That is one of the problems with short hair that when you fancy something new the only way to really go if you want something fairly instant is shorter. Eventually you end up with shorter than shorter short.

I had tried a couple of times to grow it out but it always got to the annoying stage where it was not one thing or the other and my impatience would have me cutting the style back in.

What changed? My daughter has beautiful long thick dark hair. Really, I mean it is like a dark shiny river of hair that the older she got the more she perfect it seemed to be. I would sometimes dry it for her after a bath or shower and loved the way it felt and looked. I will admit I was a little envious of it’s beauty and the fact she could do pretty plaits and other fun things with it.  I kept thinking about growing mine but then talking myself out of it until one day I realised that if I didn’t do it soon I never would. Hair growth is something that slows with age and the thought of never having long hair again made me sad and so I decided to give it 6 – 9 months to see if I could at least get it to back round my shoulder.

To say I was surprised how well and quickly it grew is an understatement. I had hoped to get it long enough so that I could put it into pigtails. I passed that milestone probably a year ago now. Currently it just grazes the middle of my back, roughly where my bra sits but it continues to grow. I just had it trimmed yesterday so I have lost about an inch, but it is glossy and thick and I absolutely fucking love it.  Pigtails and plaits (braids for the Americans) are totally a part of my life again now. Most days I straighten it but the truth is my hair is naturally a bit kinky, just like me, and so sometimes I just leave it and let it be it’s wild self. I am not quite ready to embrace the amount of grey in it though and so I continue to dye it but I love how it looks with the rich red or purple colours running through it.

I can’t ever imagine going back to having it short again to be honest, despite what people say about women of a certain a age. Or maybe even because of what they say. I love my long hair. I think it suits me and I enjoy it. I am curious to see just how long it will get. It has exceeded all my expectations so far and I would love to get it long enough so that I could have one long plait that came down over my shoulder. But whether that happens or not I don’t really care because it pretty damn fabulous just the way it is.

Offering myself to you

I think it really suits you. Gorgeous!

Your hair does look gorgeous. I love your curls 😊

Gorgeous hair. I am envious. Before I had my second child, mine was good, quite long and good condition. Ever since then I have struggled to get it very long at all. Yours looks Fabulous. Enjoy x

I say pffftt! to those who say length of hair and age matters, Molly … I am in my mid 60’s … I have long hair – almost to my mid back, layered, dyed light brown and streaked blonde … and I often get id’d when I ask for seniors rate when shopping :>)) … you have beautiful hair … wear it as long as you like for as long as you wish … nj … xx

Hair is awesome in that we can change it up whenever we like, and always have the option of going back if we choose. It’s fun to experiment when the mood strikes us. Don’t mind what anyone else says about color, style, age, etc, as none of it matters…all that does, is how it makes YOU feel.

I have cut my own hair for most of my life, and still enjoy mixing it up every now and again. I am getting older now, and it is the longest it’s been probably since childhood. I am enjoying it for now, but still get that itch with the scissors, so I know a cut is in my future… I just don’t know when.

Have fun with it, no matter what length you choose!!

Such glorious, kinky hair you have Molly and “dark shiny river” is a lovely description. I really like how your eye peeks through and how we get a peek at your underwear.

I have moved your hair since I saw it! I too am e viois of my daughters hair. Growing my hair out has taken forever and while I could probably use a change and I am defying the long hair vrs age thing – I love it long. And it can grow forever. I’ll be that old lady with long hair! I love the color you have and the layers. Mine is too thing for that.

Your eyes look so green in this image, it’s beautiful. I’m a fan of long hair, it’s nice to have something to stroke / pull on.

You do have beautiful hair 😀

Slightly kinky made me laugh!
It’s beautiful hair and I think you look fabulous in this photograph.
Missy x

A wonderful photograph! ‘Cascade’ is definitely the word for it.
Thanks for ‘everything’!
Indie xx

It’s beautiful, and I adore the colour. And though I am also a woman of/past a certain age, I also have long hair and make absolutely no apology for it. 👍

Your hair is really beautiful, Molly. I love the lovely curls and the rich color!

You have such a lovely hair color. It’s a beautiful photo.

Looks lovely. 🙂 I had my hair quite short for a while, but I’m enjoying it long for varieties of reasons. Ahem. I am all for doing what you want and fucknig societal expectations too!

Speaking of gorgeous eyes… god yours are stunning!

You are so damn gorgeous. In general and in this shot. Your eyes are just wow!

I’m the opposite. I love the texture of my hair and it can get long if I leave it be and leave it in protective styles, but it’s a fucking pain. Anymore, I want it cut so I don’t have to do anything to it. I cut it again for the first time in like 5 years (straight, it was down past my shoulders) and waffled about growing it out again, but I’m full on tired of it. I may cut it super short soon

Oh Molly this is so lovely. I actually thought your hair looked lovely as it tumbled down your boobs in your latest #boobday picture. You have filled me with hope as well. My hair just wasn’t gaining length (because I wasn’t that kind to it in fairness) I’ve recently changed my ways though it has definitely grown. You’ve given me hope that I really can reach my hair goals x

I love your hair! It makes your gorgeous eyes shine!

That hair is amazing and Oh I relate (tho mine is not thick and lush like yours)! When my hair was short I kept going shorter and funkier (and playing with color, the other way to get variety with short hair) which was great fun until I missed the long tresses with all their feminine qualities and flexibility.

Also this photo is beautiful. I always enjoy the ones in which you show us your intense beautiful eyes and this is no exception. Though your hair takes center stage it is well complimented with a green eye.

Thank you. You are right about the colouring too. I did like my eye in this image too, although my face is slightly soft in the focal range I think it came out really well

I’ve enjoyed having my hair short and not having to spend hours in the morning trying to take it. However, I hate being mistaken for a man which is an almost daily occurrence. And I don’t even know where to start with colouring my hideous grey’s away whilst it’s this short,

Your hair is wonderful, shiny and sleek. I love the colour too. Glad you persevered and have the hair you wanted xx

I’m so glad your super fast growing hair has a whole post of its own. Because I look at the back of your neck every time I’m in the shower I’m always even more surprised by how long it is when I see you/see a photo! Xx

I love the rich colour of your hair and personally I love long hair, the longer the better!

I actually think you suit both short and long – I have been wondering what to do with mine. I have recently taken over an inch off it when I got it coloured last week. x