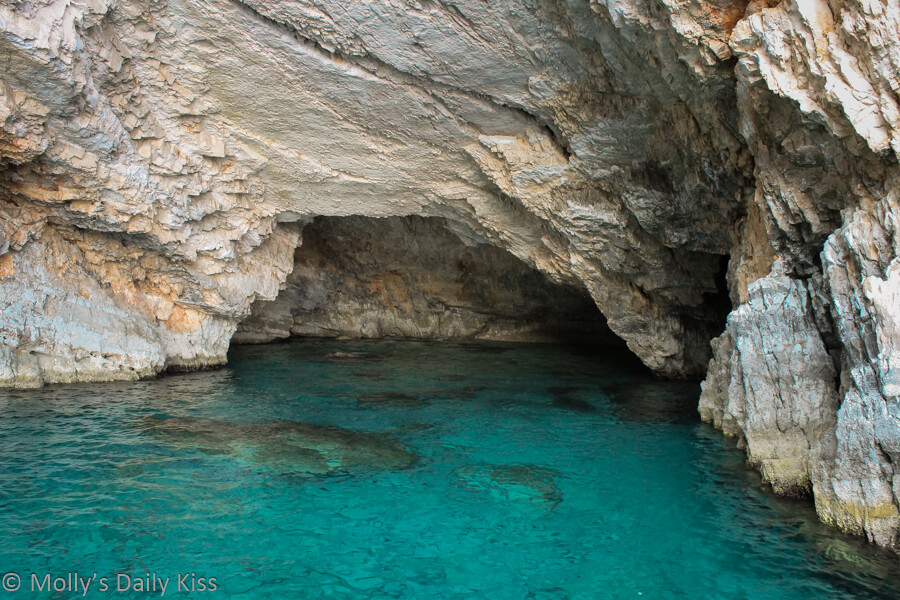 As the boat pulled away from the little harbour I suddenly realised that maybe I was about to embark on the ultimate clichéd activity for a women holidaying on her own.

He had introduced himself to me as Gussie on my first night here. I had eaten at the first Taverna I had stumbled upon after venturing out from the apartment I was renting. The food had been simple, fish and a Greek salad but it told a story of fresh ingredients turned into something utterly delicious. I had arrived late and lingered over my dinner so by the time I was done the place was nearly empty. That is when he delivered a small cup of rich dark coffee to the table and informed me it was on the house.

It turned out the waiter was in fact proprietor and not only of the Taverna but also the 6 little apartments one of which I was staying in.

Coming to Greece had been my reward for finishing the book. It was not my first but definitely my longest and at times it had felt like it was never going to be over. As motivation I promised myself this gift. Now, finally, here I was enjoying it. I wasn’t bothered about being on my own. I was used to it by now, 10 years is plenty of time to get good at it and mostly it suited me. Here it suited me perfectly, no one else but me and a huge stack of books to enjoy while I basked in the glorious weather, and a little car so that I could explore. Maybe I would find inspiration here for another book.

And that is how I spent my first week. Reading, swimming in the crystal clear waters of the various beaches I discovered and eating my way through the menu at his Taverna.

When he asked me if I would like to come out on his boat with him I happily accepted.

He picked me up in his car just after 2pm and we drove down into the village together. By the time we had parked, unloaded the bags and boxes he had bought with him onto the boat it was after 3 when we he finally untied her from her moorings and set her nose out towards the open sea. That was when it dawned on me that a single women and the handsome Greek man with his boat was hardly uncharted territory. I briefly wondered how many other women he had done this with.

Once out of the harbour we skirted along the edge of the islands. The little boat cut through the water with ease and I sat in the bow watching the water rush past and feeling the soft spray mist around me. Eventually we rounded the headline and he nosed the boat in towards the land picking his way between the rocky outcrops that he clearly knew well, finally letting the anchor down into the deep blue water.

“I didn’t realise you bought food, I thought you would have to get back to the taverna?”

“Not tonight, Sunday’s is always my night off, the place will be fine without me”

Shall we? He asked as he gestured towards the shore.

The water was cooler than I expected but not cold. We swam towards the tiny cove, a small idyllic bit of beach that could clearly only be reached from the water. As we got closer I realised that hidden beneath the rocks of the cliff the relentless sea had carved a cave into the land. At the very back there was a tiny ledge and we pulled ourselves up upon it. The water lapped at our feet and every sound echoed off the walls and ceiling so much so that when I spoke it sounded unnaturally loud.

“Yes it is,” he replied, “I don’t come here often enough”

Oh? You mean you don’t bring a steady stream of women here?

No! His answer was firm and made me think maybe I had touched a raw nerve.

Back at the boat he handed me a towel and I wrapped myself tightly in its creamy white folds. From the boxes and bags he produced wine and food. A feast of simple Greek things, stuffed vine leaves, feta cheese, olives, bread and tzatziki.

We talked, about nothing and everything. I asked him about his name and discovered Gussie was actually short for Augustus. I told him about my books and why I was here alone and why I was alone the rest of the time too. He listened and asked questions and seemed genuinely interested in the answers so when he asked me if he could kiss me I found myself saying yes.

I had not been without lovers in the last few years but none of them had ever asked to kiss me before doing so and none of them had then kissed me with such intensity as Gussie did. I felt my whole body respond to him and before I knew it my hands were reaching down to the buckle on his jeans. Breaking the kiss he stood up, pulled of his shirt and unbuckled his pants to reveal that beneath them he was not only bare but also fucking beautiful.

At the tip of his already erect cock a tiny droplet glistened, reaching up I captured it on the tip of my finger and slid it into my mouth. His cock twitched and I looked up to see his eyes fixed firmly on my face. Smiling up at him I moved onto my knees and took his thick shaft into the heat of my mouth. The sound he made in response only served to encourage me. His fingers twisted into my hair and I leant back into them slightly to encourage him to use them to guide me, to teach me how he liked it. He took the hint guiding my mouth slowly back and forth until eventually he tightened his grip and pulled me away.

For a moment he looked deep into my eyes and I knew he was searching them to see if my words were the truth. I kept my eyes locked onto him as gathered up the towel that I was still wrapped in and pushed my fingers into the folds of my cunt. It was enough or maybe too much for him and he loosened his grip in my hair and let me find him again.

When he came I could feel his legs trembling with the effort to stay standing as his come filled my mouth. I felt so fucking alive, in a way I had not felt for years and as his cock continued to twitch and leak his juices onto my tongue my body joined his in an intense and glorious orgasm.

Afterwards we lay on the deck of the boat, staring up at the inky blue sky that was just starting to reveal the first pinpricks of stars that would later decorate the sky in their millions.

“Have you seen Shirley Valentine?” I whispered.

“Yes, he chucked, everyone in Greece has I think and no before you ask, I don’t do this often in fact I have never done this before. You are the 1st woman I have bought here apart from wife”

“Wife? What the fuck. You are married? Oh Gussie why would you….”

“No,” he interrupted, turning on his side so he could look into my face. “I was married. Anna died, just over 5 years ago. She had breast cancer.”

In his eyes the grief and pain was all to evident

“No, I am sorry, I should have told you before but, well, I really didn’t bring you here expecting anything more than spending time with you.”

“It’s OK” I replied “I wasn’t quite expecting this either but I am glad it happened. I had forgotten what it felt like to want someone like that.”

Eventually the advancing darkness forced us from our spot and after negotiating back out through the rocks we zipped back along the coast. The lights from the little towns and villages twinkled on the land. This place was as beautiful by night as it was by day. Back at the harbour I sat on the edge and dangled my feet in the water as Gussie closed the boat up. I hoped that maybe I would get to visit with her again sometime soon. She had been the perfect host after all.

Gussie, what is the name of your boat? I asked pointing to the word πρωταγωνίστρια on the hull

“What is that? The Protagonist?”

“No” he laughed…. but good guess

“How appropriate” I giggled back

“Yes, indeed” he replied as he jumped down onto the dock and offered me his hand.

“She is all ready for the night now. How about you Clara, could I possibly tempt you to spend the night with me”

“Hmm” I said with a teasing grin.

This is my entry to Charlie Powell’s Freshly #Polished writing challenge. I asked for a nail vanish colour and I got Leading Lady. I was determined to stay away from the obvious film/theatre connection. For once I seem to have strayed into a more romantic and tender story than usual but I am rather pleased with it although I maybe biased because what I really like about it is captures a little slice of a country that I have long been in love with.

The First 300 are the Hardest

On Pins and Needles

I liked your story, Molly, I could picture a movie. Clever way you used the prompt.

Thank you Elliot. I am glad it worked for you that way. Not exactly the hottest piece ever but hey ho

A story does not have to have graphic sex to be hot. This was believable. I couldn’t help getting a Mama Mia vibe and picturing Ms Merle pulling unbuckling his belt.

Such a beautiful, tender story! Good to see you writing erotica again 🙂

Not sure if it is really erotica to be honest, maybe more romance with a bit of sex but it is definitely fiction!

This is lovely, Molly. It definitely sounds like that was something both Clara and Gussie needed.x

intense and beautiful story. I love how it had the beautiful and tragic elements of life mingled just as life often is. Thank you so much for sharing.

Oh, this was simply lovely! What a great little slice of holiday life 🙂