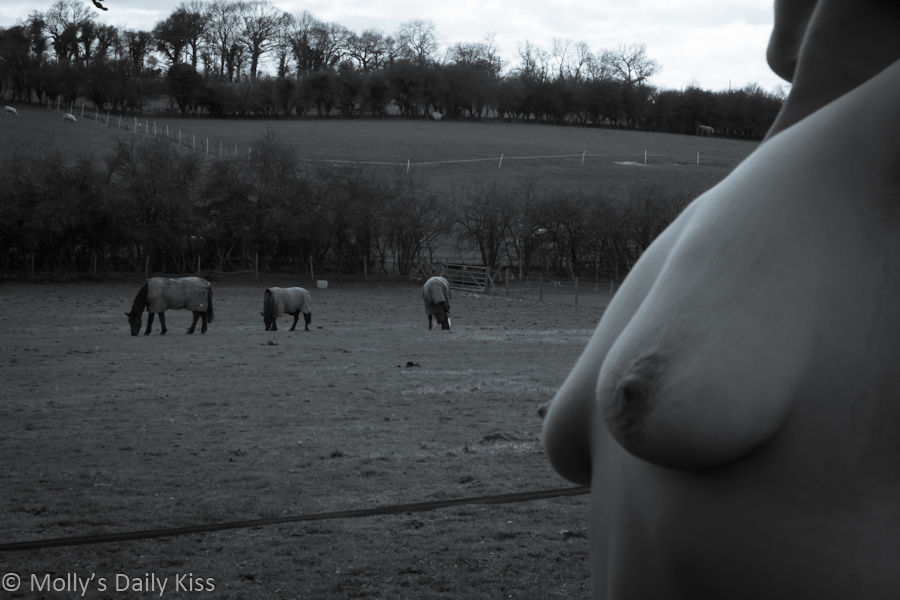 When I first saw that the current kink of the Week was Pony play I considered not joining in this week and instead concentrating on my February Photofest but then I realised that despite it not being a kink of mine I still had a little something to say and it gave me an idea for an image too.

Despite owning a couple of tails, a fox tail and a bunny tail, as well as some bunny ears, pet play is really not my thing at all. My sexuality is very much wrapped up in my identity of who I am as a woman, and so even when I can be found wearing a tail I don’t take on a fox, or bunny, or for the sake of this topic, a pony persona, I am simply Molly wearing a foxy tail.

I can’t find anywhere in my mind where being a Pony would be a turn onto me, in fact it feels quite the opposite to me. I think it would probably make me feel uncomfortable in a very self-conscious way. However that does not mean I can not appreciate the beauty and eroticism in it for others. For example these images posted by Jade; There is something very sexy about them, the interaction between the people, or should I say Ponies, is highly charged and very sexy it is just not a place I can ever imagine myself sharing with them.

Now, it is February Photofest here in my blog and when I saw this topic I immediately thought about the horses I pass on one of my regular walks and so I headed out to see if they might be obliging subjects. They behaved perfectly, the same can not be said for me…

Oh and just in case you are wondering, the wind whipping up across that field was absolutely biting but then I think there are a couple of features of this image that probably give that away

I am your fairy tale

On the receiving end

Let your hair down

You should get closer to the horses next time!

What a gorgeous capture…it makes me want to strip and run around in the country somewhere with you! 🙂
xxPenny

I love your interpretation of pony play. 😉

It’s funny, Pony was never sexual for me either, although I have had some definitely sexual fantasies involving REAL horses, lol. But as a Pony…nope, that wasn’t what it was about. That scene that you referenced above was an attempt to sexualize it and see where it went…it was fun, and yes, sexy, but not my typical place to play when in pony space.

But I’ll talk more about that in my own post on the topic. 😉

Obliging ponies? Isn’t that what Catherine the Great wanted! 😉

Fantastic shot; I’ve gone for a naked ramble in the countryside too for this week, only I don’t have any animals in shot.

I wonder if there is any part of the UK countryside without naked people and cameras running around them!

What no Lady Godiva action either? Damn I feel cheated. I’m just kidding of course (Although something about you riding a horse naked is pretty hot to me).

A beautiful picture with a great setting. As for Pony play you articulated much the same thing I feel about the topic. I can see the eroticism in it for others but I could never stop being me in order to pretend to be something else.

I bet it was a chilly day! They are all wearing their jackets and you’ve been so kind to remove yours for us 😉

Once again, you have shown that you know how to distract a breast man. 😉

This is a fantastic twist on a kink that is not yours. Beautiful photo, Molly!

Horses and boobies – no better combination for me!!!