Do you remember my Pussy Pride Project? I created it back in May 2011, it is a cross between a meme and writing prompt the aim of which is to ” try to build a little blogging celebration of the beauty that lies between a woman’s thighs in an attempt to make women feel more accepting about this truly unique yet mainly hidden part of their body.” In the 18 months since it was created the project has attracted a whole host of different bloggers of all ages, locations, sexualities and genders and all with their own unique voice/story. If you would like to see how you can join in with the project and links to all the other bloggers who have done so then visit The Pussy Pride page.

To try to keep the project growing and relevant I have over time invited some bloggers to guest their Pussy Pride on my blog and today I am very excited to announce that the delicious duo that makes up the blogging team at Vagina Antics have agreed to contribute to the project as guest posters. This week it is the turn of Heather Cole to share her thoughts (she got her homework done first) and so her blogging companion Nikki Blue will be bringing up the rear next week with her contribution to The Pussy Pride Project!

When Molly asked Nikki and I to write a guest post for her Pussy Pride Project, we were thrilled. OK, there was squealing (on our side), jumping up and down (again on our side) and a whole lotta OH HELLZ YEAH! I might have even called my Mama to share the exciting news. Top UK sex blogger wants little ‘ol us?! OH HELLZ YEAH! But after all the hollering, swooning and celebratory biscuit baking, I was like… what the fuck am I going to say about my pussy that is different from the other amazing bloggers that have already participated in this project?

The temptation to delve into my past to discuss the evolution of my relationship with my vagina was strong, but I was afraid that y’all would fall asleep halfway through it. “Yes, Heather. Your vagina. WE KNOW!” Besides, it’s a new year and like most other people, I’m looking forward to new projects and new adventures. I realized during a conversation with my girlfriend regarding the Pussy Pride Project that I have my own pussy project in the works.

Just last year I came out as being polyamorous, kinky and bisexual, so you know that things have been different down under with how I relate to my pussy and how my partners do too. Someone close to me at the time told me that he didn’t think I was really bisexual. “Heteroflexible” was the word he used. I took it to heart although I should have told him to kiss it. I was hurt. I was angry. I was on shaky ground with my sexual identity. I wanted to have sex with a woman but had no clue about how to go about doing it. I questioned everything about my sexuality and what I thought I knew about myself. To be perfectly honest, I was a hot mess of doubt and insecurity and that’s saying it politely. Because I had never gone down on a girl, I felt like I couldn’t call myself bisexual. And how stupid is that?

Just the other day, Boy Scout was telling me about a swinger profile where a woman wouldn’t consider herself “officially” bisexual until she had a sexual encounter with six women. I’ve seen this sort of thing on social media too. A bisexual woman tweeted that a woman who only wanted to kiss other women couldn’t be a “real” bisexual. That those women only wanted attention from men at bars. So what’s the message here? Until you lick a pussy you’re mostly a straight attention whore? What if a woman (like me) was nervous or tentative? Do we keep her out of the bisexual club until we see her go downtown on another woman?

The first time I spread my girlfriend’s thighs it was dark. IT WAS DARK! Talk about a rookie mistake. We laughed about it later, because we NEVER had sex in the dark. (And never did again.) Eating pussy in the dark meant that I couldn’t see what I was doing, but my other senses gave me a heightened experience through scent and touch.

I loved how my girlfriend’s pussy smelled. Rich, subtle, heavenly. It became ingrained in my brain that night, and I swear, I’m salivating as I type this. That first time she was shaved, and her cunt was as soft as a pony’s nose. The phrase “burying my face” was not an exaggeration in my case. I could have languished between her thighs for hours. Her piercing clicked against my teeth as I licked, and sliding two fingers into her slick pussy in addition to what my mouth was doing felt a lot like learning to pat my head while rubbing my stomach at the same time. (Do y’all even do that in the UK?) Coordinating all that took some practice, and I don’t think I made her orgasm. However, the sounds she made were music to my ears, and I know without a shadow of a doubt that we both enjoyed ourselves.

Before my first face-to-pussy experience with Liri, I remember wishing that I had a guide to study. The most common advice I received was, “you have a pussy so you already know what feels good.” Um… to a Type-A person like myself, that’s WAY vague. So I asked Liri to write a blog post about cunnilingus, and it’s still the most viewed page on Vagina Antics. However, I wanted even more specifics than that. Thus the idea for my bi-curious guide was born. It’s coming (heh…) soon. Of course it’s a work in progress because I am. I’m still learning my girlfriend’s pussy AND my own. My personal mission is to bolster the confidence of other bi-curious gals (and guys for that matter) to boldly go forth and LICK THAT PUSSY! Because if you don’t succeed… 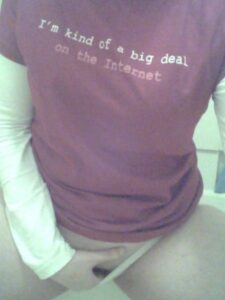 Great to see the Pussy Pride Project back. Brilliant post.

Hi ..I’m a subscriber to ure blog and am a avid fan of yours ..today I’m writing to I coz I need some help and guidance on a personal issue ,if u are okay with my request please let me know and I’d like to share the details..please help..the reason I’m asking u is coz of ure sensitivity and ure soft heart
Thanks

Please do get in touch. You can email me at [email protected]

How could I not be proud of my own pussy? I do not have it but if I had I would surely be in this campaign.