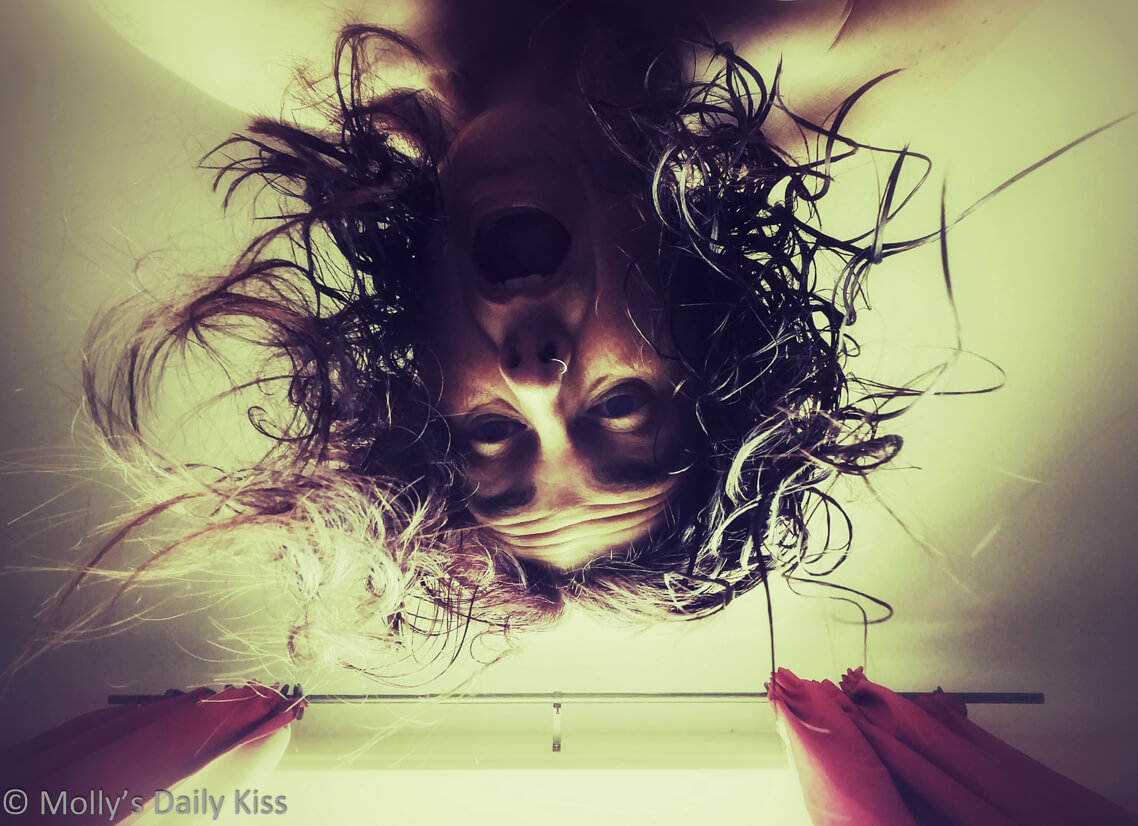 “Medusa remains a potent icon at a time when women leaders continue to be viewed skeptically or, at worst, as inhuman. Indeed, almost every influential female figure has been photoshopped with snaky hair: Martha Stewart, Condoleezza Rice, Madonna, Nancy Pelosi, Oprah Winfrey, Angela Merkel. (Have a few minutes? Do a Google Image search: Type in a famous woman’s name and the word Medusa.) These businesswomen, politicians, activists, and artists made the same “mistake” that Susan B. Anthony identified when she commented on the lack of women’s voices in 19th-century newspapers: “Women … must echo the sentiment of these men. And if they do not do that, their heads are cut off.” These women infringed upon the domain of men. The only response, as suggested by their Medusa-fied images? To cut their heads off; to silence them.”
~ The Original Nasty Woman by Elizabeth Johnston

Such an awesome shot – I love it! I love all the textures in it – the fact that half your hair is still wet, some starting to dry… Really cool shot x

My favourite book as a child was Hairy Maclary. This probably wasn’t what you were going for but it reminds me of that. Awesome picture.

Very true. Powerful image, I can almost hear a scream of rage.

I couldn’t work this out from the thumbnail. This is challenging and amazing.

This is fab, and has an important message! (also, love your curly snaky hair!)

This is so usual but absolutely fantastic. I love the way you have used your hair and your expression. 😊

This is so unusual and absolutely fantastic. I love the way that you have used your hair and rhe expression on your face 😊

Very powerful image. I love it!

Amazing shot! On a similar note, a senior manager referred to women working in the same field as me as a ‘coven’. What’s he so afraid of??

Goodness that is quite some photo. Love it!

The image and the title fit together perfectly. Brilliant.

I love this photo, such a great expression and brilliant idea.

This is brilliant – so creative x

Chop your head off? Let anyone try. Great image and a fabulous quote – now I want to read that book!

This feels like such an *iconic* Molly photo. It’s powerful and BEAUTIFUL and creepy in the best way. I love it.

I love that, thank you

This is so powerful,it shouts Medusa very loudly and with real passion and fury.

This is incredible Molly, I love the power of your image alongside the accompanying words too, very powerful x

This is incredible. I feel all the rage and pain. Fantastically creepy my friend!