The Other Social Network 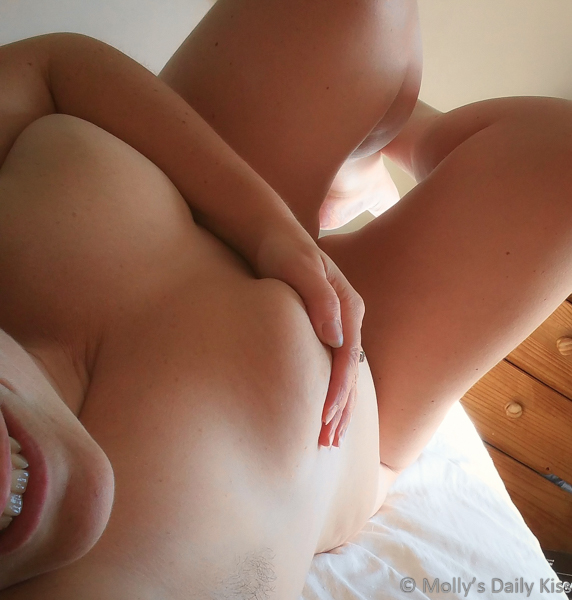 Yesterday I wrote a list of things that had happened in 2017 and I thought it would be nice to continue that trend on Sinful Sunday and repost my most popular image from Instagram this year. When I went back and looked through all my images I was surprised to find it was this shot. Not because it isn’t good but because it is from way back in February and most of the other pictures from earlier in the year have 40 – 50 likes on them at most. Clearly this image captures peoples eye more than the others.

I suspect its days are number as my most liked image though as in the last month or so I have a number of images with 90+ likes so unless people scroll back through my images they will eventually knock this one off the top spot.

IG is a weird old platform. They are hugely body negative, male nipples are fine, female nipples are the next best thing to Satan. Any sign of pubic hair, male or female, also seems to be too much for them. Sometimes images get deleted and you have absolutely no idea why. However despite all this I have persevered and as of an hour ago I had 999 followers. It would be rather fun to finally break the 1000 mark before the year is out but I won’t hold my breath as that is another weird things about Instagram, follower numbers fluctuate a lot. I have also discovered other cool folks to follow and maybe at some point next year I might write a little post about my favourite IG accounts so you too can find them if you are also on Instgram. That is as long as my whole account doesn’t get deleted because IG has a tendency to that to body positive folks.

YOU are the other social network.

I agree – I don’t get how Insta filters either. Stuff that shouldn’t be removed gets removed and vice versa.

Happy new year to you both <3 Xx

I don’t know about IG but i like this image a lot – I can see some underarm hair and your smile, very personal I think x

Thank you. It is funny you mention the underarm hair as I had a guy message me on IG asking me for a picture of just my underarm hair. I obliged and he was utterly delighted with it. Every now and then he crops on my TL if I post a pic where you can see I have not shaved for a few days

Molly this image is so happeeeeee! I can see why it’s so popular.
I have a couple of Instagrams but Tabitha is too naughty and keeps getting warnings so I kinda ditched it. I watch from afar with a daft very safe animal account.
Popping on over now to get you over the big 1k! X x

Lovely photo of you and so natural.
I got very tired of Instagram and theyre fickleness.

This is a lot of beautiful squeezed into a very small space! Absolutely gorgeous, Molly x

And 100% with you on IG. I have an account with zero followers, locked, just for me, and the number of times I find an image removed because it ‘goes against our community values’ is amazing. As you say, no rhyme or reason for it.

I’m surprised you still post on IG After all the fickle censorship. Facebook (it’s owner) is even worse and Pinterest not much better. Have you considered Tumblr? I can post almost any still pic. The first time I posted a gif of a spanking scene, I got a warning. I guess be careful about what Tumblr considers “videos”. So far Wpress hasn’t given me any warnings, have they warned you?

Ultimatley it’s probably best to self-host with your own website on a non-censoring hosting service (such as inMotion)…but it’ll cost ya!

BTW – I don’t mind pics that have the natural look (including unshaved pubes).

I do have a Tumblr but it is a horrible platform for a number of reasons. 1. You lose control of your content really easily and 2. All adult content is now hidden behind a log in so the only people who can view your content is those logged into Tumblr therefore it is essentially a closed world.

I am already self hosted and I have been for many years. WP and Blogger are both fairly hostile to adult content and the only way to really be OK is to find a good host and go self hosted. You are absolutely wrong about it costing you, of course that depends on your budget but you can get hosting from Hostgator for as little as $6 a month plus the cost of a domain name. My current host is Webhosting ninja and I have been super pleased with them so far. Oh and inmotion hosting does not support adult content so no, don’t use them. Also if you are on wordpress watch out as I know quite a few blogs that have been deleted for posting graphic images and if they delete you for that then all your content is lost.

I love this sexy shot!
As you know, I too started using IG after Eroticon 2016 but I eventually deleted everything as it almost outed me to colleagues and such. I am back on IG but this time without the sexy posts. However, I am following you 😉

Happy New Year to you, Michael and your close ones.

The smile says it all Molly. You are just full of joy and happiness and it is totally infectious. x

I hate IG, but absolutely love this image. The framing, the happy vibe from it.

This photo makes me happy! In part because you’re fighting the good fight on instagram for more body positivity but also just the way your body looks: buttery skin, perfect light, an unbridled smile. This is everything a nude should be!

“Next best thing to Satan” is a great line. As dor IG i’ll give you credit for sticking with it. I can barely stand using even my vanilla account on that network.

Not having your IG account deleted seems like a perfectly good 2018 goal to me! >< I love this photo because you're smiling – you look so happy and playful! It makes ME smile and feel good about the world around me. Happy New Year, Molly! xx

I can understand why this was a much appreciated photo from 2017. I am on IG but not as MPB, I find Twitter and the blog enough of a worry when it comes to the possibility of getting deleted. Love your work and long may we all be able to see it!

The smile is mesmerizing, I bet that’s part of it. And you always look like you have so much fun!

IG is not for Modesty Ablaze as I know they wouldn’t appreciate my feelings about “freedom of expression”. LOL !!!

It is no surprise that this is your most loved image, Molly. It’s gorgeous. The main draw for me? I absolutely adore that grin on your face.

[…] The other socail network, by Molly Moore, Molly’s daily kisses […]

It’s a gorgeous image. I think I’m going to try and use it a little more, not necessarily sexy shots but as a way of posting images I keep taking even though my 365 is finished.