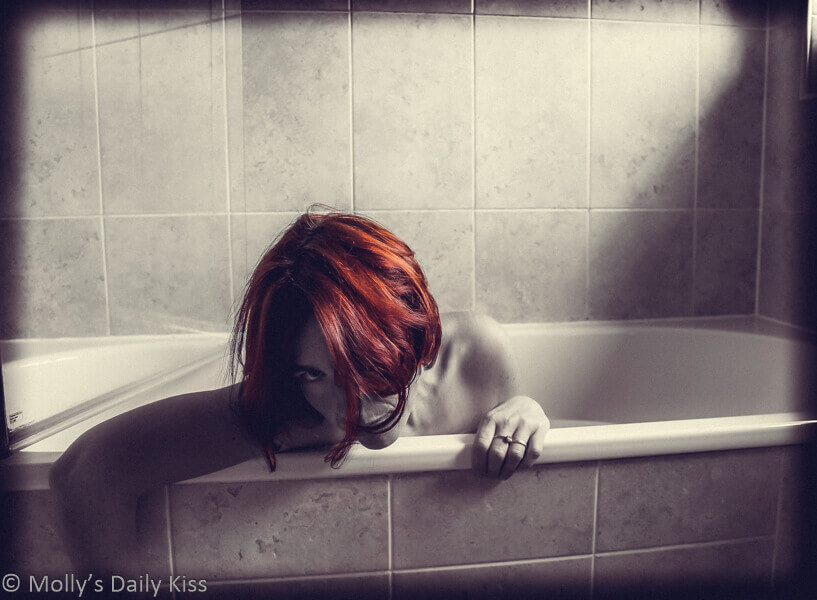 Earlier this week I wrote about hair for Kink of the Week and posted a picture to go with it (Let your hair down) which seemed to catch people’s eye so I thought I would continue on that theme with another image from the same shoot.

These were a real bugger to take because our bathroom is tiny and so getting the camera far enough away on the tripod was tricky. I can’t tell you how many times I climbed in and out and in and out of the damn bath trying to get these pictures. The light in the room is really good though and I do wish the room was bigger because I would use it a lot more often for pictures if that was the case.

If you compare this image to the one I posted earlier in the week you can see my hair looks to be a different colour. That is a result of a different angle which allowed more light to fall directly on my hair and a bit of post processing which bought out the copper tones. The truth of the matter is that is somewhere in between the two. In the direct sunlight it definitely looks more coppery and out of it the plum tones show up better. Oh and if you want to know if the colour is real or not than you will have to read my post from earlier in the week.

This is lovely, the edit adds a rawness to it, the look on your face almost a challenge. And the hair colour just pops….gorgeous 🙂

This is very bewitching! Your expression is almost, not quite, scary. You look quite sated. I love that your hair is the one splash of color.

What amazing use of color, Molly! Well done! And I can definitely understand what you went through to get the photo just right… 😉

The splash of colour adds an almost vintage feel to this picture. Your expression is halfway between “come get me” and ” I’m gonna eat you” very sexy! X

Powerful shot, Molly. Love the challenge in your eyes

This picture freaks me out – I LOVE it! You have a whole Sadako thing going on – definitely look like you’re going to crawl right out of that tub and come through my computer screen. Maybe I’ve just been watching too many horror movies lately… 😀

I am soooo glad it inspired this in you. I do love creating images that have a slightly dark and/or chilling vibe to them

Stunning shot, and looking at the expression on your face I wonder just what you were thinking at the moment.

I hope that it looks like I was thinking bad dirty things but to be honest I was probably thinking, this shot better work I am giving up….

A great image and well worth all of the hard work that you put in to creating it. xx

Beautiful editing, this is hard to tear my eyes away from

This is a fabulous image. I like the one from earlier this week too but I love this one because of the look in your eye. You do a very powerful ‘look in the eye’!!! Xx

Haha, that made me laugh… somehow that ‘look in the eye’ seems to come more naturally in pictures than a smile. No idea why to be honest

Edited or not, your shots are always amazing and you’re always striking. No exception here. Great post x

I love the way the colour of your hair in the sunlight really pops and the look on your face really makes this image shine!

I love this Molly! The light and the color are perfect and your pose is so great. All the tile and the pop of color, and the way you seem to be ready to crawl out if the tub, it brings to mind a sexy, creepy, film. Love it! And thanks for sharing that you had to pop out of the bath a bunch to get the shot, it’s always fun to get a peek “behind the curtain” of an artist 🙂

By oh my what a shot, alluring, seductive, powerful and that gorgeous gorgeous copper hair falling so the look in the eye is readable

That is so very striking. The model of course, but the photo and the editing too. I love it.

It reminds me of Jerome’s 19th century painting, “Truth Rising with her Scourge”.

Damn. I can’t get it to embed in this comment, so I’m going to have to link to it. Apologies: think it’s rude to link back to my own blog, but it’s the only way I can show this image.

Click on the painting and it’ll go to a bigger version. She’s even scarier than you, though not as hot. Which still leaves plenty of room for her to be hot in.

Hot Damn! Love this image, Molly! I’ve been traveling and missed SS this week. Glad I didn’t miss this one… you guys did well. Love the color.

I was trolling your site and stumbled on this photo (again). I had to giggled because I didn’t realize that my recent photo is so similar to this one. The photos are so similar in pose and location but yet different in the feeling that comes through each photo. That’s so cool! thanks for being an inspiration to me.