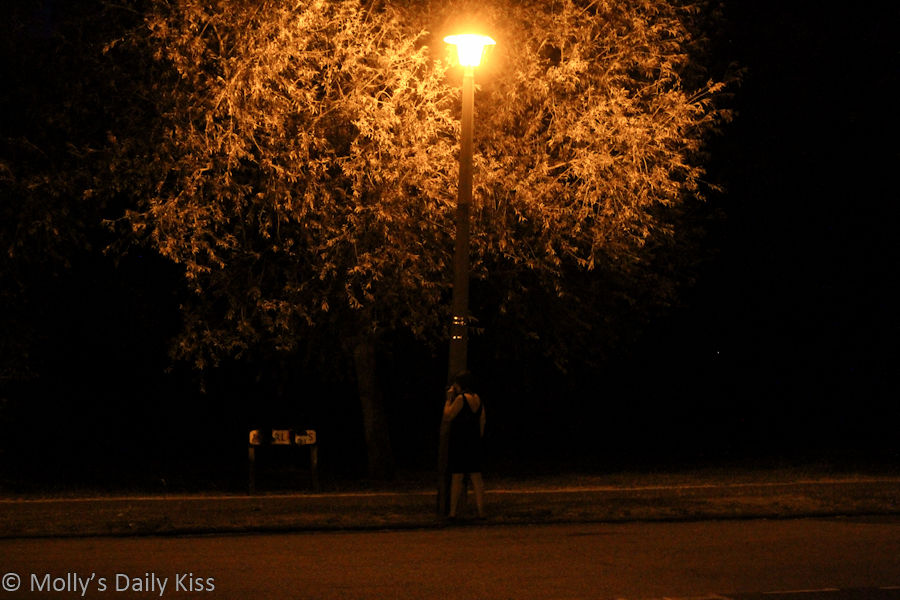 I have a secret, a secret stash of Scavenger Hunt images that have never seen the light of day. As a general rule it is much easier to take these images during the summer when less clothing is an option. It is obviously far easier to get your bum or tits out if you only have to pull up your skirt or top as opposed to 4 layers of winters clothes, whilst holding an umbrella! So I take most of my Scavenger Hunt pictures during the summer but then I file them away and slowly publish them here over the course of the year so if some of my Scavenger hunt images appear a little out place with seasons you will know why and considering the current state of the weather in the UK this one is no exception.

I had long ago decided that if I was going to do a street light location it would have to be in the dark or semi darkness at the very least to truly get the full effect however we had also discovered that quite a lot of the street lighting in this area was rather on the tall side and so I get the light and someone standing beneath it in the shot you had to be quite far away which meant that the person in the pool of light was almost a speck. We are not ones to give up on an idea though and it was on one of our walks back home from a local restaurant that I spotted that the road we were in still had the old lamp style street lighting and being fairly quiet too we decided that this was our moment.

I will admit now, that I had consumed a fair portion of red wine at dinner that night and whilst not drunk I was certainly merry and I am fairly sure it was this that can be blamed for my rather brave disrobing…

Making sure everything was in frame before getting started and that no late night dog walkers where out and about…. 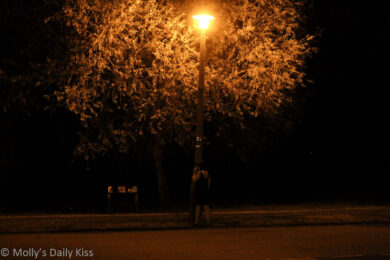 Not sure what came over me but a bum flash…. 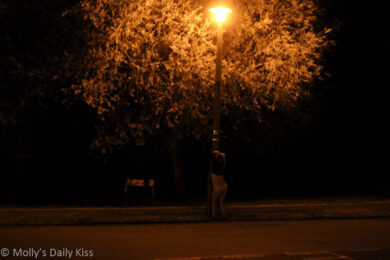 turned into a full-blown streak 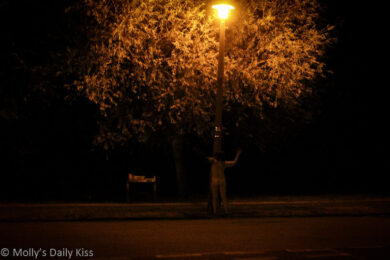 I am sure it will come as no surprise to anyone that beneath my black dress I was wearing absolutely nothing. 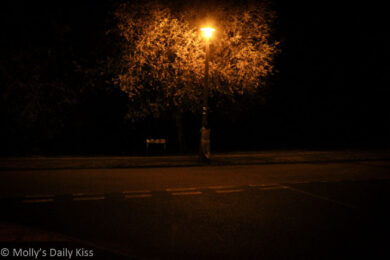 And yes I am hugging the lamp-post, to my delight the concrete was still radiating the warmth of the day 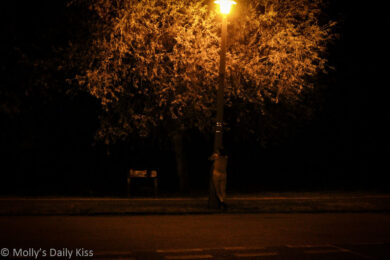 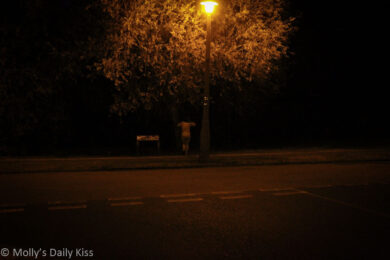 But eventually I re-emerged, although slightly more cautiously this time until I was convinced that the coast really was clear 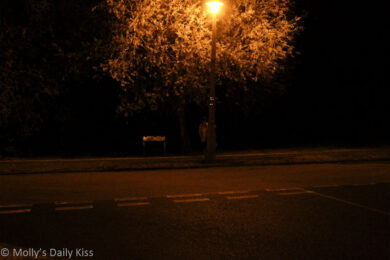 At which point my bravery started to return and this, my favourite shot of the whole series, was the result. 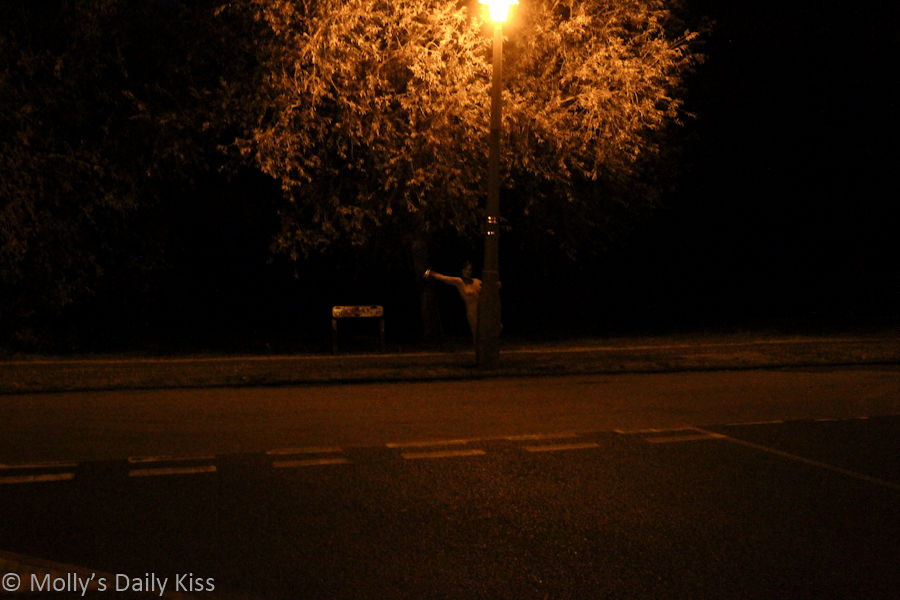 We had so much fun doing this one, my little run into the bushes had him literally crying with laughter and there were other even sexier outcomes too as once my dress was back on I was led back into the bushes, pushed down onto my knees and presented with a face full of his beautiful cock but that is a whole other story for another day.

This ‘Street Light’ location is the 41st  notch on my Scavenger Hunt list.

*If you want to see the images on a larger scale just click them and hey presto!

You are so cute !

What I love most is how endearing you are running from the imaginary car and then sheepishly reapproaching the lamppost. 🙂

It’s representative of the ‘you’ that you present here on your website (which isn’t the whole ‘you’, of course). You show that sometimes women are confident sex goddesses, and sometimes, we’re just naked and running from imaginary cars. We’re both. 🙂 I love that about you, and I love the fact that you show it all.

Thank you for this comment. I love that you see this about me. I do try hard to show a real truth about me on my blog. You can not expose everything all the time but I like that you see more of who I am here.

I echo Domme’s sentiment exactly. I loved the playfulness of the story, and have felt such an opposite of brazen and shyness in situations. You portray them both beautifully.

And yes, the last photo is my favorite too, but I must say I could not help but giggle when I saw the photo where you ran away!

This made me laugh. I love how you run and hid!

See even in the dark and a quiet street I am not that brave. Although I would have laughed as well at the imaginary car sounds and you running for cover. The end part is the one I like the most followed by the blow job in the bushes… hmmmm

Molly, you go girl! I love these images. I adore the story. You are truly have a blast and being totally sexy! Sir, I know you were having quite a show.

looks like a great series of shots. I had to giggle at you running from the imaginary car, I probably would have done the same.
Great hunt

LOL; I am sure there was something on the Vicar of Dibley Easter Episode like this (bunny suits not naked young ladies!)

Still amazed by how brave the Scavager Hunt peeps are. We tried to do some naked photos on a Cheshire summer evening and I was caught, tied to the tree, by a dog walker. Which is a story to go with a sinful sunday post one day! 🙂

Ohhh… love this!!
And for all the reasons you mention, it might not be a notch of mine ever… but you never know 😉

These are such a great series of shots, Molly – I love them! Amazed you got completely undressed for it (and adore the last pic.)

Having just recently managed to capture this location with the help of Delilah, although I haven’t posted the pics yet, I know now just how difficult it is to get both light and person in frame 🙂

The Scavenger Hunt pages are updated!

This is absolutely brilliant! What fun! I love the brazenness that a good wine buzz gives me! 🙂