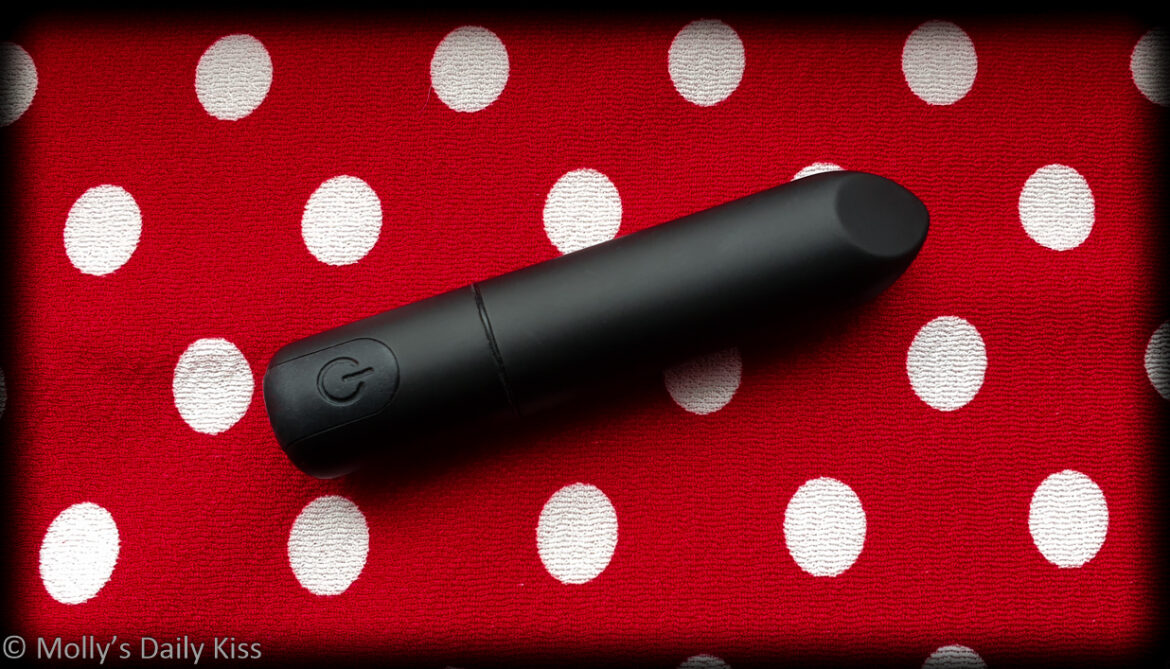 Sadly they are often not known for the robust longevity and for many years the only ones available required batteries the replacement of which is not cheap and over time you would end up spending more on replacing them than you had on the original toy.

The along came recharge bullet vibes. But that resulted in them no longer being a cheap little toy you could just pop in your cart as an added extra. So is there such a thing as a reasonably priced rechargeable bullet vibe that has the buzz you need?

Surprise surprise a fully rechargeable bullet vibe with an angled tip, 3 speeds and 7 pulsating patterns. It comes with a UBS charging cable so you can plug into your laptop or any USB port and it takes about an hours to be fully charged. it only comes in black and is fully waterproof so if you like a bath wank then this will definitely work for you. It is a pretty standard size for a bullet vibe, 3.4″ in length and will easily fit into a small handbag or purse.

The Sohimi bullet vibe comes in a simple small black box inside which is a plastic sleeve that holds the vibe in one part and the cable in the other. When it arrived it seemed to be already be charged but I plugged it anyway to make sure that it at it’s full capacity when it came time for me to use it.

It has one button that does all the controls. You hold it down for about 3 seconds and it give a couple of little pulses and the light comes on. Then click once and it starts on the lowest steady setting. Keep clicking to work up through the 3 power settings. After that there are patterned pulsating settings but I didn’t use any of them as they don’t work for me when it comes to a clit vibe.

The tip of this toy is always interesting. Lots of bullet vibes either have a pointed tip or a rounded tip but this one essentially has both. One side of rounded and the other is flat and the very ended is pointed so you have various options depending on how you like things.

As I said at the beginning bullet vibes have always tended to work for me but not all bullet vibes are created equal. Some can be little more than a faint tingle as they lack power and others just don’t have the staying power. I can’t tell you how many times a bullet vibe has conked out on me mid wank or mid partnered sex. That is definitely not the case with this little vibe though

The 3 power settings gave me plenty to play with. I started on the first one and basically used that as a warm up and then moved up to the second setting when I needed more. Having used this toy a lot I have come using both the middle and high power settings. it really just depends on how sensitive and horny I am feeling. I also really like the flat side of the head which I find feels really good pressed to the side of my clit with the point flush up to my clit. It just hits exactly the right spot for me.

The other thing I love about this toy is that is holds a charge for a really long time. I have not used it for a good couple of weeks as I have been trying out other toys but today when I started writing this I put it on my desk while I was writing. I like to see the toy I am writing about and then I thought, well I wonder if it still have any charge left. The answer is most definitely yes. So even though I have used it and not charged it for at least 2 or even 3 weeks it is still had plenty enough power to make me come again.

This is where I think the Sohimi Bullet Vibe just knocks it out the park because this toy is an absolute bargain. It is currently $19.99 and if you use my coupon code MOLLYMOORE at the check out you will get 10% off your order. Which you can also use for any of their vibrators. I didn’t do a lot of research but I couldn’t find any other rechargeable bullet vibes for this kind of price anywhere.

Who is the Sohimi Bullet Vibe for?

Who is the Sohimi Bullet Vibe not for?

Anyone who needs deep rumbling vibes to be able to orgasm

I is for Icicle…

On the 18th Day of Kinkmas