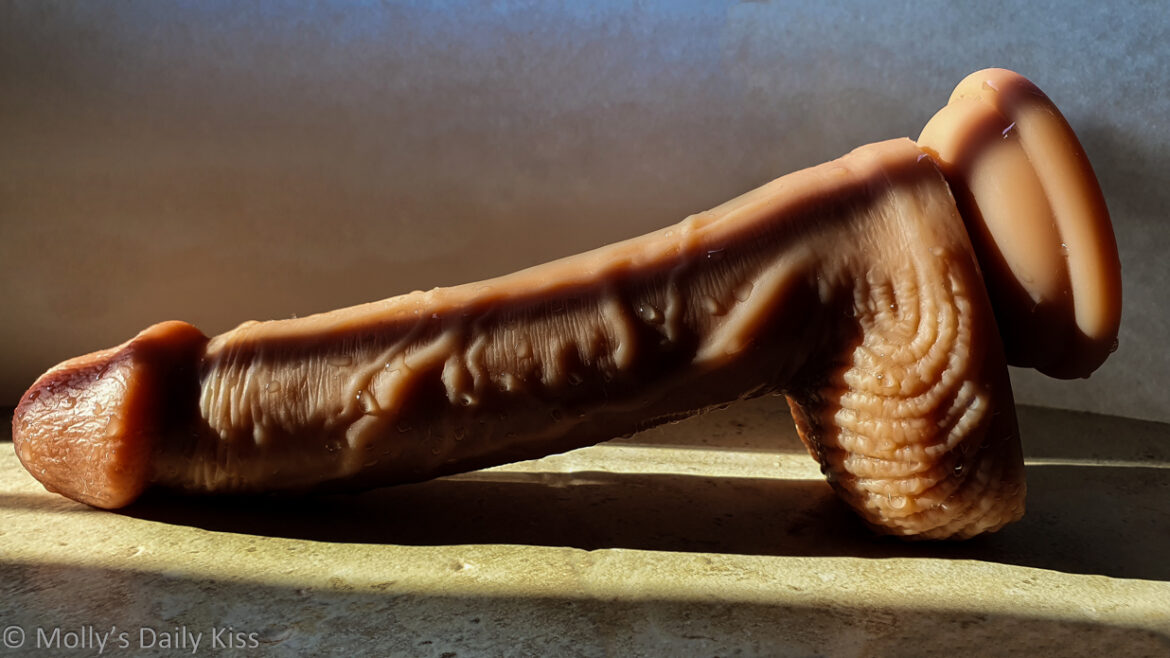 It is exactly what it looks like. A realistic silicone dick. It has a firm core and skin soft outer core with realistic vein detail and balls which sit atop a suction cup base.

Is it really silicone though Molly? I can hear you asking. Well the answer to that is I believe it is. The company assure me that it is and I tried setting fire to it and whilst is crackled and spit a bit it didn’t really burn and all that was left was a white ash residue which from what I have read indicates that it is silicone. It also doesn’t have any smell to it at all which also supports that it is made from silicone and so to the best of knowledge I believe that it is definitely is made from silicone.

Like the other toys that Sohimi sent me there is no fancy packaging at all. It came in a simple black box and inside that it was wrapped in plastic. I gave it a good wash once I had got it and left it on my desk to admire for the rest of the day because a dick on my desk cheers me up and makes working that bit more fun. Also, well to be quite honest this is a damn fine looking thing and it also feels really nice in my hands. I found myself giving it a little squeeze through out the day and also holding it by the balls and giving it a good wang around. Think if it a bit like a dick version of a stress ball.

So let’s move from desk ornament to it’s intended use and get down to some good old self pleasure.

Lather this toy up with some water based lube and I have to say that pressing it into me really did feel remarkable actual dick like. Again clearly not the same as being a partner but still a really delicious experience. I really like the soft skin outer layer and the firmer core does actually make it feel very realistic. It feels like a dick does and whilst it lacks the real warmth of a human penis because it is made of silicone it doesn’t feel cold when you push it into you either.

I will say the suction cup is probably the one weak spot when it comes to this toy and if you are buying it for that alone then I would look around for something with a much better suction cup. I personally thing it is too rigid and the lip is not smooth enough and so found that it had a bit of a tendency to gradually lose it’s grip on things so to speak but in the shower on wet tiles it was better but it definitely needs a surface like that to grip on. I found it wouldn’t hold to the wall or even my slightly varnish chest of drawers. For me, it is a minor thing as I tend to like laying or reclining when I masturbate and so I am not that bothered but if you were buying to fulfill your spit roast fantasies with a partner then you might be disappointed.

Really simple. Lots of warm soap and water and it is ready to go again as soon as you are.

A Rosa by any Other Name