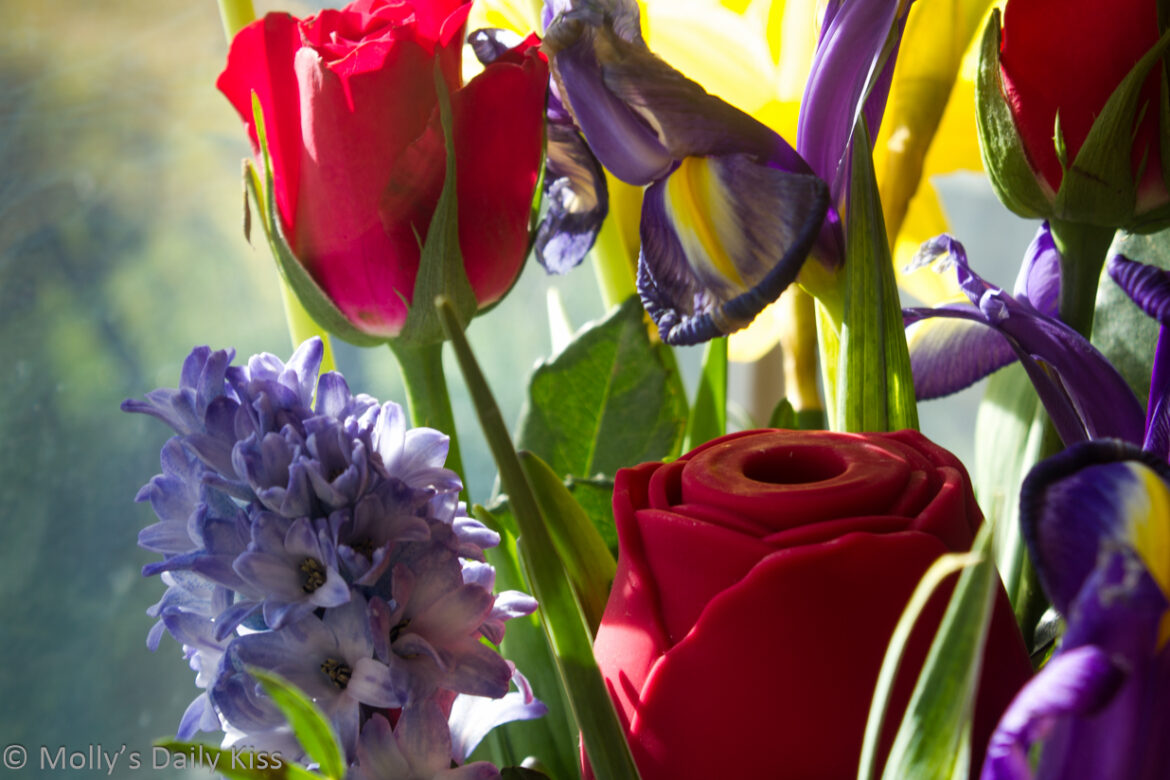 I will admit that when Sohimi contacted me to asked if I would review some of their toys I was a touch dubious. I get contacted by a lot of companies asking me this and usually when I reply and tell them what the deal is I never hear from them again but that was not the case with Sohimi. They have been nothing but professional and courtesy and quite frankly a joy to work with. They gave me this toy free in exchange for a fair and honest review. There are affiliate links in this post which means if you shop it doesn’t cost you any extra but I get a little % of that sale and at the bottom of the review there is a coupon code so you can get 10% off your purchase.

So I am not going to spend ages going into lots of details about it’s specifications as you can find all that on the product listing on Sohimi’s website but essentially this is a clit stim vibe that uses a vibrating base to move the air in such a way as to create vibrations. Despite the website using the words suck and sucking on the product description is doesn’t actually suck your clit or any other part of your body into it because that would be a bad thing.

It comes with a magnetic USB charging cable that the rose head sits on and lights up. Once it is fully charged it sits there and glows a pretty red colour. I have to admit I rather enjoyed having it sitting on my desk like a little red night light when I was working away in the evenings. I have always been a big believer in pretty looking sex toys and this toy definitely ticks that box.

There is no fancy packaging with the Sohimi Rose Clitoral Vibrator. I just came in a simple box. The outer packaging was plain and discreet though. It was super easy to charge. Plug in USB, pop it on the plate and leave to flash away. Once it is fully charged the light goes steady. I was surprised how quickly it charged as well and I have charged it again a few times since that first day and every single time it was fully charged within 2 hours. Also it seems to hold a charge fairly well and I have used it 2 to 3 times before needing to charge it again.

So let’s get down to the nitty gritty shall we. I have used the Sohimi Rose Clitoral Vibrator toy quite a few times before writing this review and that is because it surprised me and I wanted to be sure it was not just a one off thing. Which I have discovered it is not and also using it multiple times I have tried out different settings on it and for the first time ever have actually ended up using one of the patterned vibration settings (No.7) to get me off. Mostly I am off the opinion that patterned vibrations are just annoying and that definitely applies to the other ones but No.7 just seems to have a cadence that works for me. This toy is definitely not as powerful as some of the other more well known brands of clit stim vibes on the market but you will pay a considerable lot more money for one of those toys. This pretty little thing is a bargain in comparison and for the price is actually a fairly decent bit bit of sex toy kit.

The opening of the toy fits perfectly over/around my clit. Unlike some of the other clit vibes I have tried with type of design it does not make that disturbing suctioning sound when I apply to my skin or if I tilt it slightly to one side. I could roll it from side to side, which felt sooo good, and not have it make that noise. The opening is made from fairly firm silicone which does not have much give but it is silky smooth and comfortable.

One of the my favourite things about this product is the shape of the base and how it sits so perfectly in the palm of my hand. It just felt really comfortable and natural and unlike with some other toys where my hand often starts to ache after after a while this toy just was so easy to hold in place and also rock and tip from side to side too.

The head is not small though and whilst I found it fitted my anatomy perfectly if the space around your clit is very small and your labia is close to your clit you might find the head slightly too big for you. It measures 4cms are the widest point.

When it comes to noise it is definitely not a silent toy but also it is no where near the noisiest toy I have ever used. It actually has a fairly low pitch sound that is more rumbly than buzzy and I think you would could happily use it with someone in the room next door (unless your walls are paper thin) and they would not be able to hear it. Also it is definitely more quiet once you place it against your body.

Not just a clit vibe

The rose shape at the top which creates the look of petals does have folds in it however the whole toy is waterproof and the body is made of one continuous piece of moulded silicone and so I found it super easy to slide my fingertips into those folds with some soap and water and clean them out. There are no seams anywhere on the head for moisture to get stuck in.

Anyone looking to try a clit stim air type vibe who does not want to splash out on a more expensive brand.
People who like clit stimulation around their clit as opposed to directly ontop.
People who prefer slightly rumbly vibrations to buzzy ones.

Anyone who already has a more powerful clit stim type vibe and loves it. This one would probably not live up to what you are already using.
Anyone who likes pinpoint clit stimulation only

The Sohimi Rose Clitoral Vibrator surprised me. I really wasn’t expecting much from this when I agreed to review it but I have been pleasantly surprised just how much I enjoyed it. It is definitely not the most powerful vibe of it’s kind but I actually enjoyed it slightly more rumbly vibrations. It is also adorably pretty and is one of those toys you could potentially leave laying around and at first glance no one would realise what it was. The battery life seems excellent too. Whether that will last long term I can’t say but so far so good and all that is all the more amazing when you look at the price of this toy which is currently $39.99. (although see below on how to get it even cheaper) It is definitely a good buy for the money.

Bennie and the Jett

A Cock With No Name

Molly, when I saw the second picture I couldn’t believe the design. Aesthetically pleasing.
The price point appeals to my frugal heart. (I have spent a pretty penny for a good toy, you get what you pay for!)
Your review suggests that it is a value product and if you are scared by the more expensive versions of this toy this might be a good place to start! Thanks for the review!

On second look I now see it in the first pic!