A Bulge at the Seams 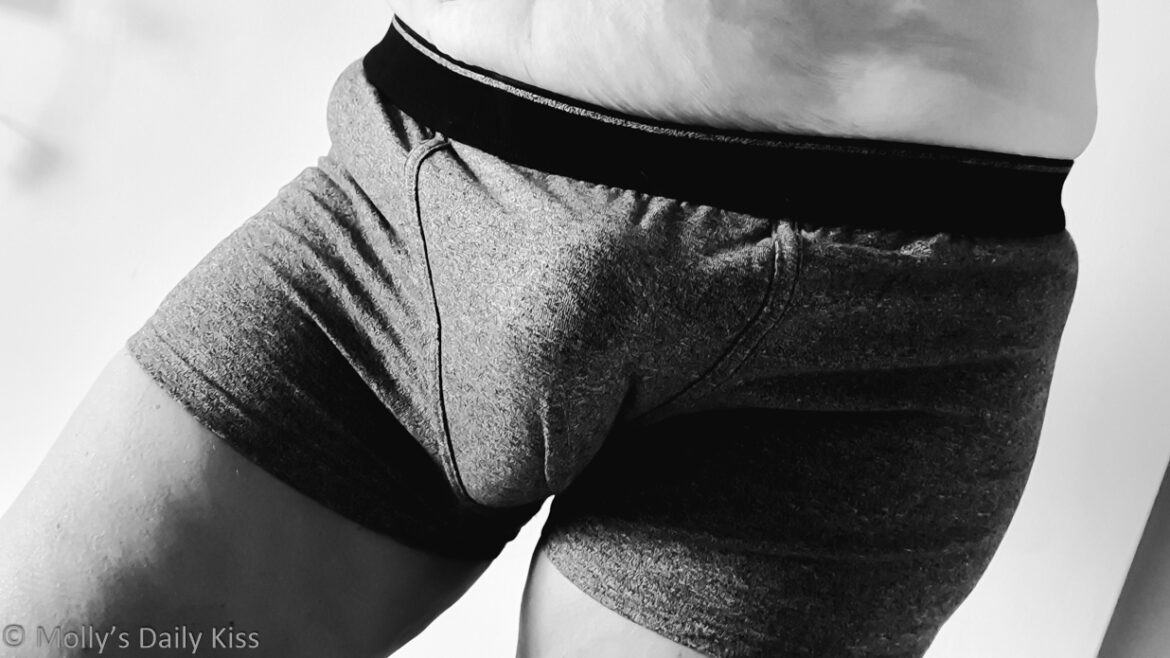 Bulge: a rounded swelling which distorts an otherwise flat surface.

I can’t help it sometimes. My eyes flicker down to the front of his trousers and then back to his face as he talks. It is the first of a few furtive glances to check out his bulge. I really try hard not to make it obvious. I would be annoyed if he kept staring at my tits while we were talking so doing the same thing to his crotch would be just as rude but also, I put on a good bra, a low cut top. I hope he has noticed. I hope he has taken a few furtive glances of his own.

For a moment I find myself imaging what it would be like to lean over and cup the soft swell of his cock and balls in my hand. Would he shift uncomfortable as I touched him. Would he grow hard beneath my touch? I realise I am smiling at the thought and try to focus fully on what he is saying but he has stopped talking and is just watching me.

“What were you thinking about?” he says

“Umm, nothing” I stammer back but I can feel the heat rising in my face and I know my blush is giving me away

He smiles a knowing smile. “Yeah right” he says “Shall we go” and he offers me his hand.

The car park awaits. The darkness envelops us. He drops me home eventually.

I love a good bulge. A pair of trousers or jeans that just hint at the shape of their junk hidden beneath (flybutton jeans and bulges are the gold star of the bulge world in my opinion) but remove those and find a well fitted pair of underpants that holds their dick and balls snugly showing of the soft swell of their tackle. It is like a promise, a hint, a temptation; like when you smell the coffee before you even see or taste it and your imagination fills in the blanks and you know you want coffee. Yeah, like that, but it not coffee I want when I see that bulge. The only thing that can make a bulge even hotter is watching as his dick gets hard under the fabric or even feeling it as you reach out and trace your fingers over him. The warmth of my hand meeting the warmth of his junk through the thin material.

When I as planning this post I realised I could probably wax lyrical for hours about bulges but also that I would really just be saying the same thing over and over; Bulges are so intensely hot and sexy to me. They are DEFINITELY one of my kinks but really how many ways can I keep saying that until it gets boring and how do you show something is sexy, apart from words when you don’t have a bulge of your own.

What a delightful collection! Especially your own. 🙂

All the YES to seeing/watching, but especially to feeling and causing further response.

“I’m hard” means nothing to me.

Mmmmph…my favourite sight, a bulge in jeans when he knows that I know and we both know what’s coming

I’m disappointed not to have been asked! 😉
In all seriousness, after decades of the phrase “he undressed her with his eyes” being used as a stick to beat men with normal, healthy, respectful, sexual inclinations, a little spoken of positive of the current sexual revolution is that men can finally get undressed with her eyes. (Ok, it was happening all along, but at least we are getting to a point where we can be honest about it.)
Viva le bulge! Vive la vouyeur!

Fuck! That is so hot Molly. Your words, and the carousel of bulges – unnff…..

Thank you for asking me to take part x

mmm love to see a bulge
thank you for sharing

Aaah, it’s so frigging gender-affirming to see my bulge alongside everyone else’s! This post is just incredibly hot – I have definitely done the ‘sneaking glances at their bulge’ thing and you’ve captured the feeling of getting “caught” looking so well here. There’s just so much sexiness in this post!

I struggled to read this because there were so many distractions! Especially those black & white CKs…unnnnfffff!

And you’re right, the only thing hotter than his bulge is watching/feeling his bulge get harder *for me*.