Molly and the Three Teddy Bears 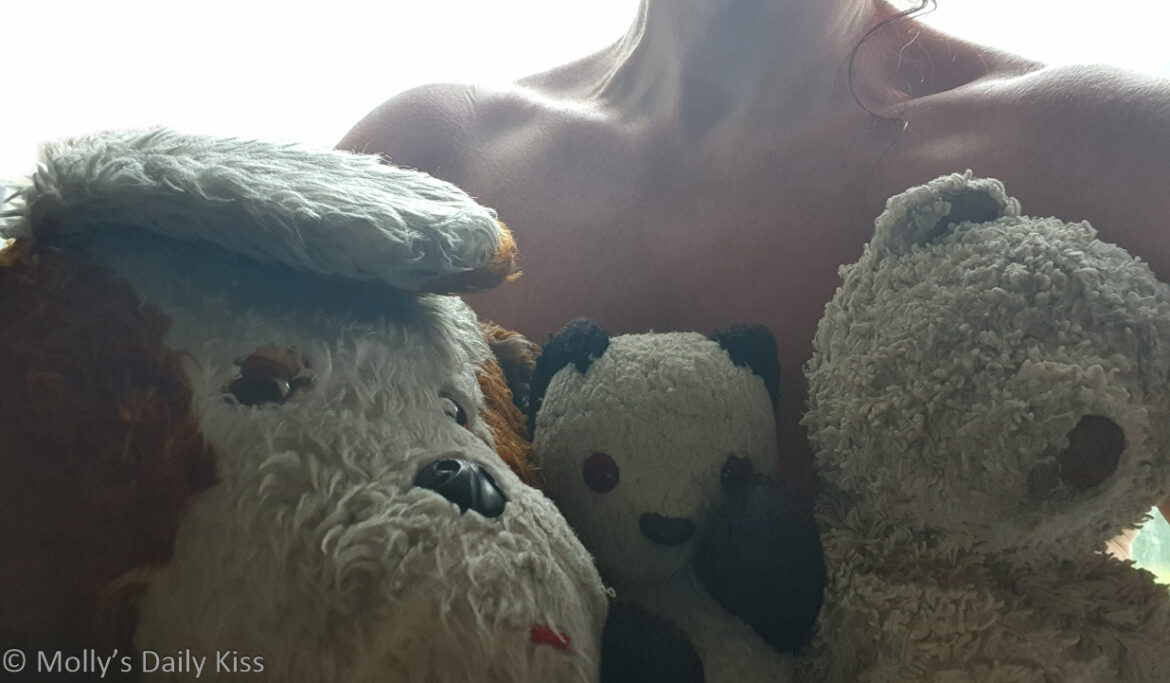 “A teddy bear does not depend upon mechanics to give him the semblance of life. He is loved – and therefore he lives.” ~ Pam Brown

I don’t have a Teddy Bear or stuffed toy kink but I do have some important Teddy Bears in my life. This is a tale of Molly and the Three Bears

Poon is a small Panda. I think I was about a year old when I got him. When I asked my Mum to send me this picture I also inquired where he came from. This is what she said;

“I think we picked him up in John Lewis Holloway on one of our trips. You loved him always. He was small and cuddly” 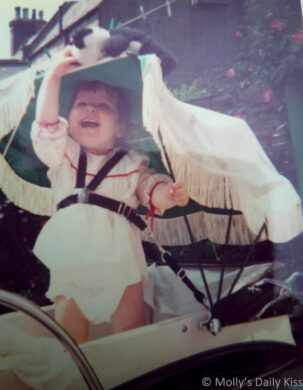 Clearly I have no memory of that but the picture supports her story of how fond of Poon I was. He got his name because I couldn’t say Panda and so turned it into Poon and it just stuck. He has been with me ever since. Sitting on my bed or bedside table in every home I have had. Because he really fairly small once I got bigger he wasn’t really a snuggly bear but more just a small comforting presence that has always been there. I guess he is roughly 47 years old and considering that he is remarkably good shape. Unlike Humphrey!

Humphrey is not a bear either but a dog. He actually used to have a little pink fabric tongue poking out of his mouth. It fell of years and years ago. He was a gift to me from one of my uncles and I think I was about 6 when I got him. I can remember him turning up with this giant stuffed toy (he is not giant but to my 6 year old self he seemed that way at the time) I think I fell in love with him instantly. He was big and soooo soft and unlike Poon I could snuggle up with him. He soon smelt like bedtimes and I loved him even more.

When I was in my tween/early teen years I will admit that Humphrey may have been used in ways in what is probably seen as one of those rites of passage. I definitely practiced kissing on Humphrey and I think it is safe to say that he may have been subjected to some intimate rubbing between my legs. To be honest I am not really sure why because I don’t ever remember it feeling particularly good but I think it was just the sensation of having something substantial between my legs that I enjoyed.

Humphrey lives on the chest of drawers in my bedroom now. No more sex action or even cuddling for him. I don’t think he was the best made cuddly toy to start with and his eyes are only just hanging on in there. So he sits up all on his own surveying preceding

This Teddy was a gift from Michael about a year or so after we got married. I think it was an attempt to bring out my little side. It partially worked for a bit and we did have fun exploring some ‘innocence taking’ role play but DD/lg is not really my kink. If I have any interest in age play at all then it is more along the lines of naughty school girl and commanding headteacher type role play. My ‘little’ is definitely more of a 18 year old provocative and uncooperative young woman. She might be wearing a school uniform still but the skirt is too short and she is probably busting out of her shirt. She can probably be found behind the bike sheds tormenting boys and smoking cigarettes. Ask her into your office to explain herself and she will sulkily oblige and mostly continue to try your patience until you finally decide to teach her lesson.

Teddy is called that because well he is actually a Teddy Bear. He was when I first got him so incredibly soft. He is made of that plushie fluffy fabric but years of being snuggled by me has meant he has lost a lot of fluffiness but I am absolutely OK with that because a bit like Humphrey is smells of sleep. I have discovered (by accidentally leaving him home when I have been stay away over night) that I actually have trouble sleeping well without him now. I actually feel kind of daft writing that. I am after all a 48 year old woman, surely I should be past needing a bear to sleep with?

When Michael and I separated I did ponder Teddy’s fate. After all he was a gift from Michael and it felt a bit like he carried some baggage from that which I was uncomfortable with but the thought of setting him aside made me sad and I realised he is my Bear now. Where he came from is incidental to his existence now and how I feel about this now.

I suspect in time a replacement will come along. After all he was once a pristine white colour and now he is more a grey/cream colouring. But he fits perfectly in my arms at night, snuggled up under my chin against my chest. The idea that as adults we don’t need comfort is nonsense in my opinion. Sometimes we are lucky enough to get it from another human or even a pet and sometimes not, in which case I highly recommend a Teddy.

The Wizard of Oz

I still cannot believe we both have the same panda, granted mine is a little more ‘well-loved’, tattered and threadbare but what a bizarre coincidence.

He now sits on a shelf because he’s a little delicate. I do remember my mother put him in my bed when I moved into my first owned property which I found a really odd thing to do! As for now, I don’t have any cuddly toys, I’m not a particularly cuddly person.

That is so funny we have similar Teddies. And I think you are fairly cuddly

Ha! I sleep with a fluffy bunny and now that you sleep with a bear, I know I’m not weird at all! He has a very knowing look and snuggles between my breast and chin, just perfectly.

Teddy will always be there, no matter time. It’s good to remember the good old days when we were younger. Thanks for sharing. Amy

What lovely memories <3 I wish I still had some from when I was a child, saldy not! x

This is a lovely exploration of memory and the accompanying photograph is so beautiful, from the clearly loved plushie toys to the way the light paints your shoulders.