Kink Of The WeekSinful Sunday 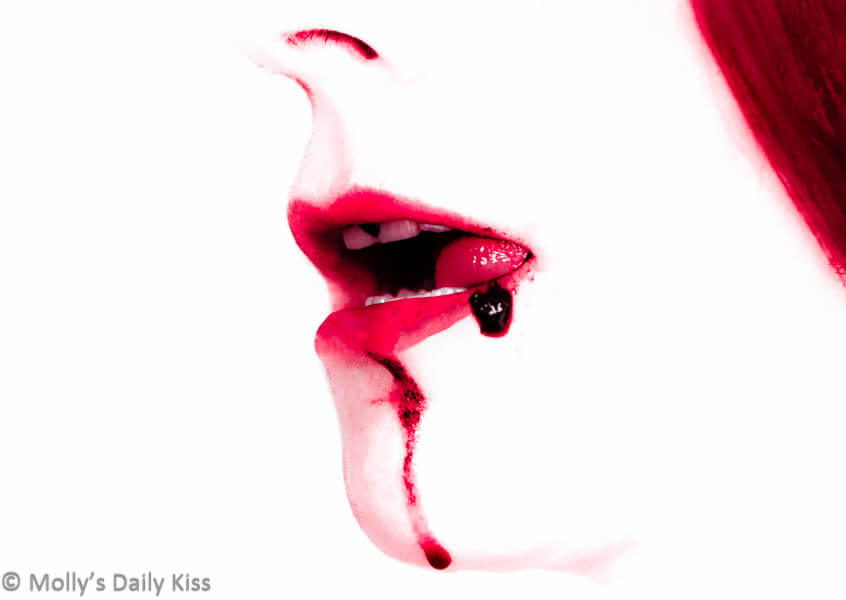 My interest in vampires definitely started with Interview with a Vampire. It remains to this day one of my favourite movies. It was only many years later that, on discovering the book in a charity shop, I read Anne Rice’s original story that the movie is based on. I liked the book but I liked the movie more. It was not until True Blood burst onto the screens that another vampire tale captured my imagination. I had tried other books in the meantime, but they seemed to be lacking something. True Blood definitely didn’t fall into that category. It was dark and sinister and at first had just the right amount of gore, blood and sex to thrill me. Sadly along the way things went from brilliant, to good, to bad and then worse and I stopped watching.

Then about a year ago my vampire interests were sparked again when I stumbled across a book called Discovery of Witches by Deborah Harkness. As a general rule fantasy fiction just doesn’t do it for me but the cover of this book caught my attention and despite the ‘witches and vampires’ being a bit clichéd something about it tempted me in. I am glad it did. I am currently half way through the third and final book and if I am completely honest I am slightly dragging my heels because I find myself reluctant to part with Diana and Matthew just yet. For the purpose of this post though it is Matthew who should be mentioned because of the two main characters he is the vampire and a very well written vampire he is too. He has just the right mix of intense control of himself with that lingering threat of being a potential cold-blooded killer. He is intelligent, powerful, dark, brooding and when needed, utterly ruthless. I like him a lot.

Despite all this I don’t really have a vampire kink per se. I am not turned on by the idea of being one in a role play or fantasy scenario. I have never masturbated to the idea of a vampire scene or interaction but I do find the literally depictions of them (when done right, so no sparkles) to be exciting. There is something about them, the darkness, the sinister threat, the blood, the chill, the Gothic horror of evil in human form, the power, the possession of others, the desire to consume that I find hugely erotic. However where I am really hooked when it comes to vampires (and other sinister mythical creatures for that matter) is the imagery they inspire both in others and in my own work. Hence why I have decided to combine this Kink of the Week topic with Sinful Sunday because what I love about vampires the most is the visual depictions of them and the suggestions such images inspire

“Do you wonder what it would be like for me to taste you?”
~ Deborah Harkness, A Discovery of Witches

With a rebel yell

To the naked eye

I don’t really have a thing for vampires but I really do have a big kink for biting. Just the thought gets me breathless. It takes me to the edge more than knife play does. So, in the light of that, this image is really making me struggle to focus.

I love this pic 🙂
I remember loving Anne Rice’s books when I was a teenager, I thought vampires were so sexy (as was her writing, especially her erotica!) but have kinda forgotten about them as a fantasy since. Weird because I love to be bitten ?

Seriously love this image, Molly <3 I love vampires. In fact, I find blood a turn on as equally as it makes me ill – I guess it's down to scene etc. I love the editing of this picture and how white your back round is really makes the red stand out.

I so enjoyed those books! Vampire smut was what got me into D/s after a very dry period. Love the pic too x

Nice edit on your photo.
Interview with a Vampire is a great flick 🙂

I’ve loved vampires in movies, literature, and pop culture since I was a kid. This post only intensifies my feelings. Love it!

What a beautiful and sexy image! Vampires have never been our thing, but this edit is so skillful and it definitely triggers our imagination! ~C

Vampires have never done it for me. In the Bram Stoker novel three of Dracula’s slave girl vampires come to Harkness’s bed, diaphanously dressed and making sucking noises, at which point I realised that the vampire thing is largely a metaphor for oral sex, with some domination and submission thrown in.

But I preferred real oral sex to metaphors, and while I can see that making any woman submit just by making my eyes flash red at them could be great, I think real consent is even sexier. (That’s not a virtue claim, it just _is_ sexier.)

But even though I’m pretty much immune to vampires, that pic could convert me. The colours, that vivid red against that livid white: that is most definitely a beautiful image.

I agree about consent. I am aware vampire stories can be problematic and yet there is still something that appeals to me. The danger I guess and the power, I find that attractive

This is *such* a sexy image – everything about it inspires and embodies lust, as do vampires! I’ve never had vampire fantasies, but they’re so intertwined with sexuality in most fiction that I understand why people do!

Love the creativity and effects of this pic!

Vampires just don’t do it for me, but your picture surely does. The edit is brilliant and it perfectly fits your words. Beautiful!

The detail, drips of blood, and red tones–this shot is gorgeous! I have quite a few vampire fantasies.
xxPenny

Love the edit on this Molly, the pale white of your skin against the realistic dark red of blood is fabulous x

I have never masturbated thinking of Vampires, but this is a sexy photo… and I do know what the rest looks like too.

I’m with you on true blood, it started off great but went badly wrong somewhere, however because I’m bloody minded I can’t put either a book nor a to series down until it’s finished!

I would usually agree with you. I stuck with Lost until the bitter end but True Blood just got too silly and I had to give up

Wow, the color on that photo is fabulous. And yes, True Blood did well when it was following the source material, but once it deviated, it just got ridiculous. Although, I will say that True Blood the books were essentially a watered down version of Laurell K Hamilton’s Anita Blake series, which is far darker and can often delve into the erotic horror genre. However, even that became a touch tedious when the succubus arc was introduced and the books became a never ending string of sex scenes sewn together with a bit of plot. I’m not sure if they’ve improved since I stopped reading.

I was really into vampire fiction in my adolescent years prior to ever getting wind of -cough- Twilight -cough-. However, I will say that I gravitated more to lycanthropes rather than the vampires. And lycanthropes are a regular feature in nearly all vampire fiction.

Oh, I loved that film too! This is a great shot. I love that although we think of vampires as dark, this is a really vibrant bright image. Xx

This is so lovely Molly. the tip of your tongue just sticking out the corner of your mouth, tasting the blood, is so incredibly sexy! Like you, it’s the dark, broody, edge of control but still in control thing that turns me on about Vampires. I do like fantasy fiction, so I’ll definitely check out the discovery of witches books.