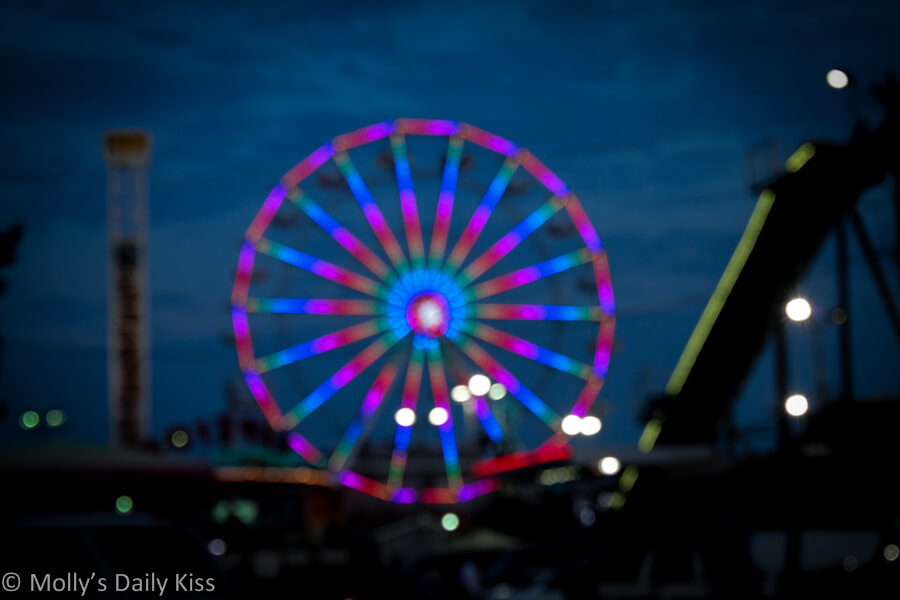 Come on” she said, pulling me by the hand through the crowds

“It will be romantic”

“No Jenny, I can’t, I hate heights they make me feel sick”

“You don’t understand, I just can’t”

The wobble in my voice pulled her up short

“Damn you are really scared aren’t you?”

All I could muster was a slightly ashamed nod.

Her hands came up and cradled my face, turning my head to look up into her eyes.

“What if I kissed you the whole time, would that make it OK?”

“The whole time?” I managed to mutter as her hot lips came down on mine and stole the question from my mouth

“Yes, the whole time”, she whispered as she pulled away.

Her smile was beautiful and she took my hand again and led me towards the wheel.

Once we had paid for our ride and were settled in the little box that was to be our carriage I felt the fear building deep in the pit of my stomach. It was something I had tried on so many occasions to fight, mind over matter, I had attempted to convince myself, but it never worked. My body always won, filling me with adrenalin that made me feel nauseous and light-headed as my heart raced, my mouth dried and my whole body shock as it was assaulted by the chemicals flooding my system.

Her lips were hot and soft against mine, insistent and determined to hold my attention, her tongue found mine, touching and tasting me and I leant into her, wanting more, needing more. She tasted of cotton candy and funnel cakes. But it wasn’t enough and as we rose further and further into the night sky my eyes darted around her seeking out the horror even though I wanted to ignore it.

“Jenny I can’t….” I stammered into her mouth

“Yes you can, stay with me, don’t stop looking at me”

Dropping to her knees on the floor of our little box she pushed the skirt of my dress up, pulled the cotton of my panties to one side and pushed her tongue into the folds of my cunt. She was good at this, she just seemed to know how to use her mouth her me. Exactly where to lick, where to nip, when to linger and when to speed up. Instinctively I slid down in my seat offering myself to her. Her fingers joined her mouth and she slides them into me, slowly, deeply. Finding that spot that I didn’t know I had until she had found it for me. As our little box reached the peak of its ride so did I, coming hard and breathless on her tongue and around her fingers. The joy of it, of her, making me laugh out loud.

The ride down was different, I nestled into her arms and we watched the lights of the fair slowly come up to meet us.

“Maybe we should go on it again” I suggested

“I thought you were scared” she laughed

“I was, but I think you cured me. However there is one way to know for sure”

This time when she kissed me she tasted of me.

Making the breast of it

What I think about

Hands and Fists and Fingers, Oh My!

A Dress to Die For

This would certainly cure my fear of heights and scary rides for sure. Hmmmm, I may have to suggest that to a certain someone. 😉

Great story! Nice and tasty. I was intrigued instantly. 🙂